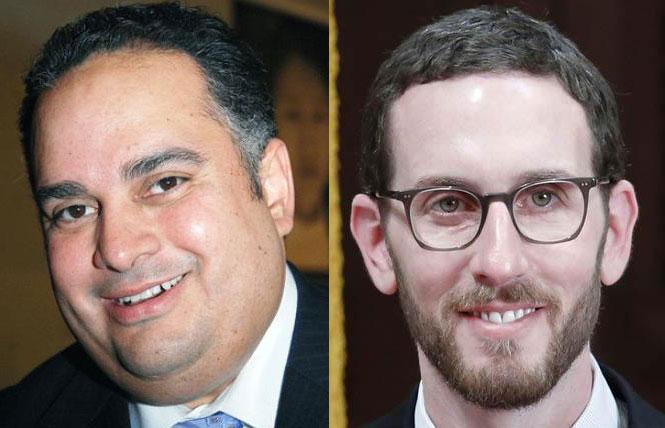 Earlier this year, gay state Senator Scott Wiener (D-San Francisco) introduced Senate Bill 379, which seeks to ensure that the University of California only contracts with medical facilities that allow the UC staff in those settings to provide gender-affirming and reproductive health care, even if the care centers are religiously affiliated. "This legislation will expand access to health care for LGBTQ people and will begin to end stigma," Wiener told us back in February when he introduced it. "I think a lot of us have strong opinions about major hospitals refusing to provide gender-affirming care and reproductive health, but this isn't even about that. This is about a public university entering into contracts where UC physicians are prohibited from providing care to our community. That's just not acceptable."

With Wiener tabling his bill until next year as he works to build up support for it, activists ratcheted up the pressure on the UC Regents to address the contracts. Last week, they adopted a new policy that retains them but requires the hospitals, such as Roman Catholic-operated Dignity Health, to let UC physicians perform those procedures when patients can't be transferred safely to another hospital, as the San Francisco Chronicle reported. It's a good first step.

"The Regents' action today is a very positive direction for UC's affiliation policy," Wiener stated after the June 23 vote. "It has the potential to significantly expand access to reproductive and gender-affirming care and to ensure UC physicians can exercise their own professional judgment in providing care. I look forward to seeing the fully developed policy, but today's action is a positive step forward."

The Regents' proposal was spearheaded by chair John A. Pérez, a gay man and former state Assembly speaker. This is a prime example of the importance and effectiveness of LGBTQ representation on bodies such as the Regents. "We should have greater ability to serve more patients but in a way that is in compliance with the policy we adopt today," Pérez stated. "We're against discrimination." The Regents approved the change 22-0.

UC has contracts with 77 hospitals and other health facilities in the state. It says the contracts allow medical staff to provide care for 35,000 patients, many of them low-income with little access to hospital treatment. But Wiener's bill — and the subsequent action by the Regents — will help end stigma. Evan Minton, a trans man, has sued Dignity Health, claiming it was discriminatory in deciding not to perform his surgery. He was scheduled to have a hysterectomy at Dignity's Mercy San Juan Medical Center in Sacramento. As we reported a couple of years ago, (https://www.ebar.com/news/legal/282236) and as Minton told the Regents last week, his disclosure of his transgender status on a routine visit led to the hospital banning his surgery on discriminatory grounds. Not only did the hospital tell him that the surgery was called off because he was transgender, shortly thereafter a hospital administrator also told his surgeon they would "never" do a surgery for a person like him at their facility, according to court documents. An appeal court revived Minton's lawsuit and Dignity Health appealed to the U.S. Supreme Court, which has yet to decide if it will take the case.

Equality California, the American Civil Liberties Union California Action, and NARAL Pro-Choice America also issued a statement in support of the Regents' policy change. "Chair John Pérez's amendments are a positive step toward addressing the concerns of advocates, students, and thousands of Californians who have been clear that everyone deserves comprehensive, evidence-based care that is free from discrimination," the organizations stated. "We are glad that the Board of Regents took it upon themselves to hold the UC Health system to stronger standards for their affiliation agreements."

The next step is for UC President Michael Drake and the Regents to complete the policy change ahead of final approval of its language in 60 days, the three organizations stated. Under the proposal, new contracts are allowed only with health care providers that offer their services to all patients, without discrimination, Pérez said at the meeting. It would not require the hospital's own staff to perform all medical procedures, but would allow UC personnel at the facilities to do so.

For its part, UC Health told us earlier this year that it "strive[s] to promote practices that maximize equitable access to health care, and agree[s] strongly that all Californians should have access to comprehensive services without interference." But it was clearly concerned about Wiener's legislation, which we hope will pass out of the Legislature next year if it is still needed.

Gay Assemblyman Evan Low (D-Campbell) told us earlier this year that since the UC system receives some $9 billion in state money, it "owes all taxpayers the best care possible."

"We are seeing reproductive and LGBTQ-inclusive care continue to be limited across the country — and that's a major problem," Low stated. "We will continue to fight to make sure public health systems do not enter into contracts with health care facilities that subject providers to dangerous restrictions. It's a no-brainer. We as leaders need to protect patients who need care, and that's what this bill does."

Wiener told us this week that he'll be keeping an eye on developments. "If the final UC policy is consistent with the outline the Regents adopted, we'll consider dropping SB 379," he stated. "I've always said that if the Regents address the issue on their own, that could make the bill unnecessary."

The Regents should finalize the policy change they unanimously approved last week. We're seeing too many instances of religiously-affiliated groups trying to steamroll over other rights, including those of LGBTQs and women.