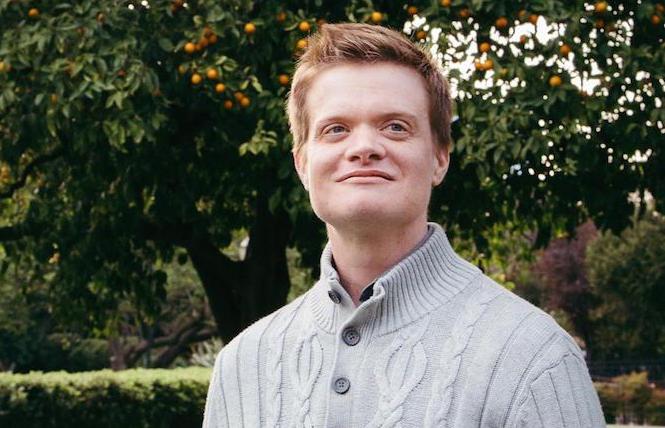 Evan Minton won an appeal and his case is headed back to San Francisco Superior Court. Photo: Courtesy ACLU

A trans man who sued Catholic-affiliated Dignity Health over claims it was discriminatory in deciding not to perform his surgery has won an appeal that has revived his lawsuit.

It was three years ago that Evan Minton, 37, had been scheduled to get a hysterectomy at Dignity's Mercy San Juan Medical Center in Sacramento. To his shock and dismay, as he moved toward his surgical date with the approval of his surgeon, Dr. Lindsey Dawson, his disclosure of his transgender status on a routine visit led to the hospital banning his surgery on discriminatory grounds. Not only did the hospital tell him that the surgery was called off because he was transgender, shortly thereafter a hospital administrator also told his surgeon they would "never" do a surgery for a person like him at their facility, according to court documents.

Minton, a former state legislative aide who now works for Voices for Progress and lives in the Sacramento suburb of Orangevale, filed a lawsuit in San Francisco Superior Court in April 2017, arguing that Dignity withheld care from Minton because of his gender identity, a violation of California's Unruh Civil Rights Act.

In October of that year, the court sustained Dignity's demand for a demurrer, an objection that an opponent's point is irrelevant or invalid, while granting the factual basis of the point.

Minton appealed the dismissal of the case and last week, the California Court of Appeal, First District, found Dignity's actions discriminatory and remanded the case back to San Francisco Superior Court.

"The trial court's fundamental error is that it misconstrues Minton's pleading," the three-judge panel wrote in its ruling. "Minton does not allege, nor does he contend on appeal, that providing him with access to alternative hospital facilities violated the Unruh Act. He alleges that the act was violated on August 29, 2016, when defendant canceled the scheduled procedure at Mercy and Mercy's president told Dr. Dawson that she would never be allowed to perform Minton's hysterectomy at Mercy."

As the panel said in its unanimous decision: "When his (Minton's) surgery was canceled, he was subject to discrimination. Dignity Health's subsequent reactive offer to arrange treatment elsewhere was not the implementation of a policy to provide full and equal care to all persons at comparable facilities not subject to the same religious restrictions that applied at Mercy (Hospital). As Minton argued at the hearing for the demurrer, it cannot constitute full equality under the Unruh Act to cancel his procedure for a discriminatory purpose, wait to see if the doctor complains, and only then attempt to reschedule the procedure at a different hospital. 'Full and equal' access requires avoiding discrimination, not merely remedying it after it has occurred."

"We are pleased by the Court of Appeal's decision, which confirms that it is illegal discrimination for a hospital to deny someone care simply because that person is transgender," Lindsey Barnhart, a lawyer with Covington & Burling, told the Bay Area Reporter. "California's Unruh Act promises full and equal access to public accommodations, including hospitals. Dignity Health's cancellation of Mr. Minton's hysterectomy after learning he is transgender, despite regularly providing hysterectomies for cisgender patients, violated the Unruh Act. We look forward to moving ahead with the discovery process and taking the case to trial in San Francisco Superior Court."

Elizabeth Gill, a senior staff attorney with the ACLU of Northern California, said in a news release that Dignity "refuses to provide necessary care to transgender patients."

Dignity Health, however, continues to contend that it has the right to turn away transgender patients if it provides separate but equal medical facilities.

"Dignity Health has a legacy of providing care to all people regardless of their background, sexual orientation, or gender identity," Dignity external communications director Dan Loeterman wrote in an email. "Our services are available to everyone without discrimination and all are welcome at our care sites. Catholic hospitals do not perform sterilizing procedures such as hysterectomies for any patient regardless of their gender identity, unless there is a serious threat to the life or health of the patient. Courts have repeatedly recognized the right of faith-based hospitals not to provide services based on their religious principles."

Loeterman added that Dignity is "sensitive to the specific health needs of transgender patients and specialty care for trans individuals is offered at many of our care sites. In this case, Mr. Minton was able to quickly receive the sought-after procedure at another nearby Dignity Health hospital that is not Catholic-affiliated."

On the whole, Minton feels vindicated and hopeful about winning his case.

"I feel really affirmed," he told the B.A.R., referring to the appellate court ruling. "I feel great, excited, and hopeful for the trans community, moving Dignity Health one step closer to abiding by the law to stop discriminating against trans people. While there was clearly a fight before the wind of victory of this judgment came at my back, it was devastating at first to be turned away because of who I am."

Minton said he felt the appeal court "stood for civil rights in my case, and that all trans people deserve this type of validation that the court said that my medical treatment was necessary. Dignity Health has been dismissive of trans people for so long, this decision has been really affirming.

"My next step is for this case to be heard in San Francisco Superior Court, to lay out our full narrative for the court, and to see what Dignity Health's response will be," Minton said. "In this day and age, trans people should be not treated this way, and I look forward to my day in court."