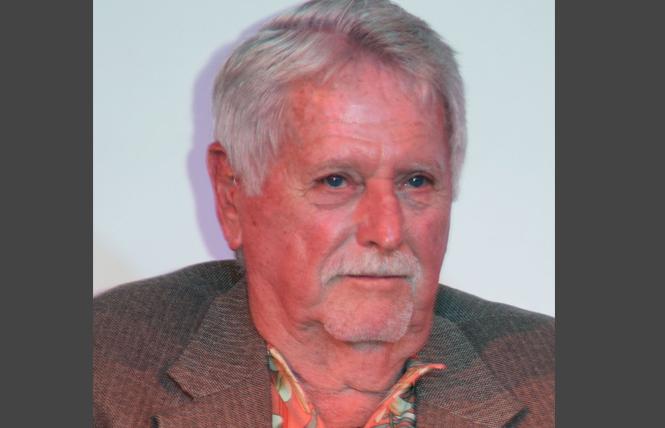 James "Robbie" Robinson vividly remembers the first time he walked into a gay bar in San Francisco. It was the 1950s, Robinson was in the Air Force, and when he asked where the "main drag" in town was, he was pointed to Market Street.

But as Robinson soon learned, the bar scene in the 1950s faced constant police harassment at a time when homosexuality was illegal in every state.

"They did everything they could to find out if it were a homosexual place, and with that then they could close it," Robinson said. "The cops would come in the bar and terrorize the customers."

In his self-published memoir, "My Story, One Gay's Fight: From Hate To Acceptance," which is available at the San Francisco Public Library, Robinson wrote that police tactics included demanding to see the identification of every patron of the bar, pretending real driving licenses and IDs were faked — and even standing with their genitalia exposed at toilets and arresting people based on their reactions.

Some businesses found to be gay bars were closed and their owners lost their liquor licenses. Others had envelopes of cash on hand to pay off police officers, the autobiography states.

In 1961, Robinson and his co-workers were discussing police harassment, among other problems gay bars faced at the time, during their shift at the Hideaway, a gay bar that was on Eddy at Leavenworth.

"We asked, 'Well, what can we do to make it better? This is ridiculous,'" Robinson said. "So we got some of our fellow bartenders and waiters at some other places and we sat one Monday afternoon and discussed it.

"And I said, 'Let's start with a telephone. If they come into my bar, I'll telephone you and then you telephone so everyone knows they're out there.' And that was the beginning," he added.

Robinson said the phone tree was the start of what became known as the Tavern Guild of San Francisco, an organization of bars and employees, which, by the summer of 1980 included 184 people and 86 different establishments, according to the Online Archive of California.

The Tavern Guild formally began in 1962. Its first president was Phil Doganiero, a bartender at Suzy-Q bar on Polk Street, according to the OAC. The guild linked the disparate and underground gay bars of the city into one community for the first time.

Robinson and Thomas Horn, the former publisher of the Bay Area Reporter, both said that the gay community of the 1960s and 1970s was very fragmented and the organizations that emerged in those decades, like the Tavern Guild, the B.A.R., the Society for Individual Rights, and the Committee on Religion and the Homosexual, brought LGBT people together who otherwise may not have interacted. The late founding B.A.R. publisher Bob Ross was also involved in the guild for many years.

"Bars played a much more important role then. That's how we met and interacted. But it was pretty tribal and we all had a niche," Horn said, adding that even gays who didn't drink would go to the bars and order juice.

Robinson said that the guild's first task was creating a culture of standing up to police harassment.

"A kid was sitting at the piano bar and when he went up to go to the bathroom a cop grabs him by the sweater and he said to the cop 'don't pull on my sweater, it cost a certain amount of money,' and the cop apologized," Robinson said. "I was standing there listening to this and I couldn't believe it."

"Another kid was sitting at the table by himself and the cop walked over and said 'you realize you're in a queer place?' and the kid looked at the cop and said, 'I'm 21 years old, you're not to give me parental advice,'" Robinson said. "The cop didn't know what to say."

Tony Montoya, a gay man who heads the powerful San Francisco Police Officers Association, did not respond to a request for comment.

Robinson said that the bar owners were initially not thrilled with the guild, fearing that they could get in trouble with the police. The bar owners were also upset about the guild's other initiative, making a list of the city's gay bars, which owners feared could have them lose their liquor licenses.

"They didn't want anybody to know it was a gay bar," Robinson said.

Demonstrating power
But the guild demonstrated its power in two ways that brought the owners around.

The first was when the bar staff demanded to be treated better by alcohol distribution staff, who often bristled and acted petulantly when they had to walk inside a gay bar, Robinson recalled.

"Hamm's beer was the big seller. We decided when the man came around to take the order we'd say to him, 'Look, we're not going to sell your beer anymore unless you have some respect for us' because the delivery people were afraid queers might touch them," Robinson said. "Lo and behold Hamm's beer came along and apologized and said 'there'll be changes made.' So we thought 'that's great.'"

"We went to the owners and said 'well, why not put it into a corporation' so if (Alcohol Beverage Control) takes it, just make another corporation," Robinson said. "In fact, at the Hideaway I was president of the corporation."

As the Tavern Guild became more formal and expanded, it provided financial help for sick or struggling bar staff, awarded a bartender of the year award, and had picnics.

"We could never have them in the same place twice," Robinson said.

It was at the Beaux Arts Ball — organized by the guild — in 1965 that José Sarria declared himself "Empress of San Francisco," an important moment in the founding of the Imperial Council of San Francisco, which continues to this day.

Robinson said he remembers the first time he heard of a gay bar opening South of Market — a leather bar called the Tool Box at Fourth and Harrison streets.

"It was so funny because they said, 'who would go South of Market?' It was all industrial. It became quite the place. But as this went along, these people joined the Tavern Guild," he said.

After about a decade in the bar business, Robinson became a barber in what became the Castro district.

"No one ever heard of the Castro; it was like going to a foreign country," Robinson said. "We were in the Tenderloin."

Horn said that the Tavern Guild worked with Harvey Milk, who popularized the Castro as San Francisco's gay mecca in the 1970s, and the Coors beer boycott that earned Milk a major ally in the Teamsters union.

"They wielded political clout and they did from the get-go," Horn said. "It was interesting to watch from afar."

Milk went on to become the first gay person elected to office in San Francisco and California when he won a seat on the Board of Supervisors in 1977. Tragically, he and then-mayor George Moscone were assassinated by disgruntled ex-supervisor Dan White in November 1978.

The Tavern Guild was hit hard by the AIDS epidemic and disbanded formally in 1995, according to the OAC, but not before its model was copied by groups of LGBT establishments in other cities.

Robinson was asked if he could recall any of his co-workers from the early days of the guild for potential interviews.

For an earlier story on Robinson, check out https://www.ebar.com/bartab/barchive/281006