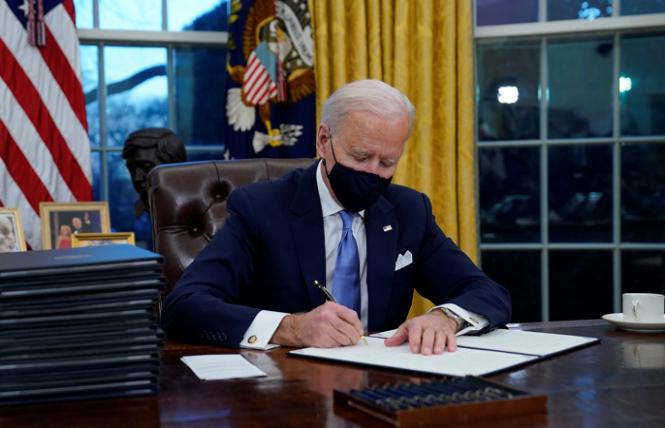 The order applies the United States Supreme Court's 6-3 decision in Bostock v. Clayton County last year to the federal government, so that where statutes — such as Title VII of the Civil Rights Act of 1964 — ban discrimination on the basis of sex, executive agencies interpret that to also include sexual orientation and gender identity.

LGBTQ civil rights groups lauded the order, and another he signed regarding diversity and inclusion trainings.

"Biden's executive order is the most substantive, wide-ranging executive order concerning sexual orientation and gender identity ever issued by a United States president," Alphonso David, a gay man who is the president of the Human Rights Campaign, stated in a January 20 news release. "Today, millions of Americans can breathe a sigh of relief knowing that their President and their government believe discrimination based on sexual orientation and gender identity is not only intolerable but illegal."

Pansexual and queer Out & Equal CEO Erin Uritus stated that advocates are looking forward to more executive action — such as lifting the transgender military ban.

"By implementing the Bostock decision, the Biden-Harris administration is already showing that restoring equality and dignity under the law — to all — is a top priority," Uritus stated in a January 20 email. "Because of this, LGBTQ Americans will be protected from discrimination across federal agencies."

Rick Chavez Zbur, a gay man who is the executive director of Equality California, stated that the order is exactly what the new president should be doing on day one.

"As candidates, President Biden and Vice President Harris promised to be champions for the LGBTQ+ community," he stated in a January 20 news release. "We were proud to support their campaign because we knew they believed in a world that is healthy, just and fully equal for all LGBTQ+ people and were ready to create that world. On their very first day, the Biden-Harris administration is already hard at work delivering on that promise — and I know they're just getting started."

The Williams Institute, an LGBTQ think tank at UCLA School of Law, noted in its news release that this is "the first-ever executive action to mention those who identify as 'queer' by name." The Williams Institute claims that 13 million Americans are LGBTQ, and that 60% reported being denied or fired from a job.

Sharon McGowan, the legal director for the Lambda Legal Defense and Education Fund, said that the LGBTQ civil rights group would be proud to partner with the Biden administration to promote equality.

"We applaud the Biden-Harris administration's swift action in clarifying that LGBTQ people will be protected from discrimination wherever federal law prohibits discrimination because of sex," McGowan stated. "We look forward to building a better future for our communities and the Biden-Harris administration should know that they have a partner in Lambda Legal to help make that a reality."

Diversity training restrictions lifted
The LGBTQ non-discrimination order was among 17 signed by the president on his first day in office, which also included a mandate to wear masks on federal property, the end of the Trump travel ban, and the lifting of a Trump administration executive order that banned federal contractors and agencies from conducting some workplace diversity trainings.

As this column previously reported, Lambda Legal was in court trying to overturn that order, signed by former president Donald Trump on September 22.

The order sought to end the use of critical race theory in diversity training.

"Many people are pushing a vision of America that is grounded in hierarchies based on collective social and political identities rather than in the inherent and equal dignity of every person as an individual," Trump's order stated. "This ideology is rooted in the pernicious and false belief that America is an irredeemably racist and sexist country; that some people, simply on account of their race or sex, are oppressors; and that racial and sexual identities are more important than our common status as human beings and Americans."

Lambda Legal stated that the effect of the order was not to acknowledge the existence of structural racism and sexism in the U.S.

"The Trump administration's effort to quash any discussion of the continued pernicious impact of structural racism, implicit bias, and sexism in U.S. society was both gratuitous and harmful," Scott Schoettes, the HIV Project Director at Lambda Legal, stated. "This past summer's protests after the murder of George Floyd and the disproportionate impact of the COVID-19 pandemic on communities of color have made that very clear. Joe Biden campaigned on a promise to confront these issues. Today, the Biden administration has reaffirmed its commitment to undertake an honest and long overdue reckoning with sexism and structural racism in our society."

"Thank you President Biden for reversing the ban on DEI training," Uritus stated. "Muzzling our federal employees and contractors is a recipe for reinforcing systemic racism, bias, and discrimination. We look forward to helping build a culture of belonging."

This same order took the additional step of repealing another Trump executive order, which had been signed November 2, to establish the 1776 Commission — the report of which, released Monday, was the previous administration's answer to the New York Times' 1619 Project that examined the history of slavery.

The Trump commission's report encouraged schools to adopt a "patriotic education" curriculum to counter curriculums influenced by critical race theories. Critics charged that the purpose of the commission's report was to downplay the effect of racism — and slavery in particular — in U.S. history, and to criticize the civil rights movement.