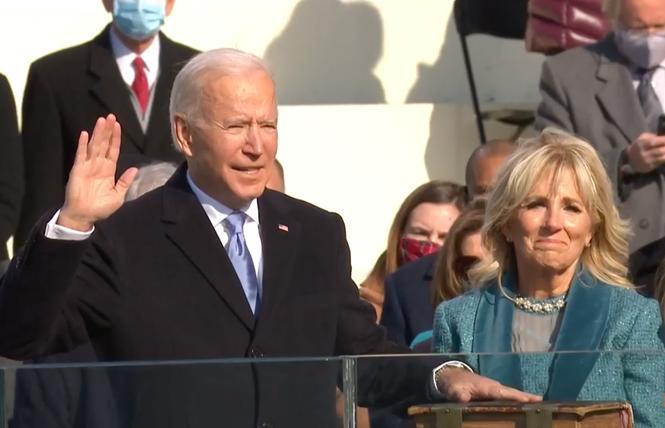 Kamala Harris, who served as San Francisco's district attorney, California attorney general, and U.S. senator from the Golden State, was sworn into office shortly before Biden, making history as the first woman, the first Black American, and the first Asian American to serve as vice president.

The 59th quadrennial presidential inauguration came one day after Biden nominated Dr. Rachel Levine, Pennsylvania's health secretary, to be assistant secretary for health at the Department of Health and Human Services, making Levine the first openly trans person to be appointed to a position requiring Senate approval and the highest level openly trans person in the history of the U.S. executive branch.

In his inaugural remarks, Biden made it clear he intends to turn the page from former President Donald Trump, who became the first chief executive since 1869 to skip the ceremony of his successor's inaugural.

(Trump became the first president of the United States to be impeached twice last week, after he incited a mob to storm the Capitol January 6 during a constitutionally-mandated joint session of Congress to certify Biden's win.)

The need for unity was the main theme of Biden's address, urging people to start fresh by listening to each other.

"Speaking of unity can sound to some like a foolish fantasy these days," Biden said. "I know the forces that divide us are deep and they are real. But I also know that they are not new.

Biden, who served as vice president under Barack Obama from 2009 to 2017, said it is time for America "to set our sights on the nation we can be and the nation we must be."

"This is a great nation. We are good people, and over the centuries through storm and strife, through peace and in war, we have come so far. But we still have far to go," Biden said. "We have much to do in this winter of peril and significant possibilities."

Biden, referencing the pandemic, last summer's protests for racial justice, and this January's insurrection, said "to overcome these challenges, to restore the soul and future of America, requires so much more than words. It requires the most elusive of all things in a democracy."

Since the insurrection parts of the nation's capital have been an armed camp, with over 20,000 National Guard troops deployed to ensure a peaceful transfer of power.

Biden did not mention the LGBTQ community by name in his address, nonetheless, LGBTQ leaders heralded Biden's inaugural in their own statements.

"Today, I am filled with a renewed sense of hope and optimism for the future of our country under the leadership of President Joe Biden and, my friend, Vice President Kamala Harris," gay San Diego Mayor Todd Gloria stated. "Together, I know they will provide compassionate leadership and a steady hand to navigate the ongoing COVID-19 pandemic, economic uncertainty, climate change and the fight for racial justice."

The national Human Rights Campaign tweeted its congratulations shortly after Biden and Harris' swearing in.

HRC will be hosting an inaugural event, "The Power of Equality," Wednesday at 4 p.m. Pacific Time. Registration is available online. The event, joined by other LGBTQ civil rights organizations, will include Billy Porter of "Pose" fame and lesbian Senator Tammy Baldwin (D-Wisconsin). 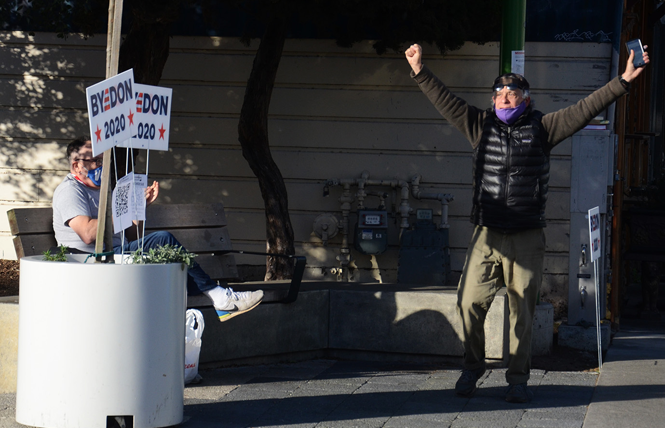 Cary Friedman gave a robust cheer as Joe Biden was sworn in as the 46th president of the United States January 20. His friend, Charlie Spiegel, behind signs, joined him at the Noe Valley Town Square.Photo by Rick Gerharter

In a statement shortly after the ceremony, San Francisco Mayor London Breed congratulated Biden and Harris, noting in particular the latter's place in history.

"Today our country finally moves forward under new leadership that will deliver on the basic principles that can heal our fractured democracy: unity, common decency, and compassion for all Americans. With the swearing in of President Joseph R. Biden and Vice President Kamala D. Harris, we are ready to put the past behind us and step proudly to meet the incredible challenging months and years ahead," Breed stated. "The joy I feel is overwhelming with the swearing-in of Kamala Harris as our vice president. I join millions of women across the country in finally seeing a woman take the oath for one of the highest offices in the country. I join millions of Black women across this country in seeing Vice President Harris take a seat at the table that so many have fought to secure for so long."

Trans doctor nominated
LGBTQ advocacy organizations celebrated Levine's nomination as assistant health secretary on January 19. She will still have to be confirmed by the Senate, which will switch to Democratic control when Jon Ossoff, the Reverend Raphael Warnock and Alex Padilla are sworn-in by Harris January 20. (Padilla was appointed by California Governor Gavin Newsom to replace Harris, who formally resigned her seat Monday; Ossoff and Warnock won runoff elections in Georgia.)

"CenterLink applauds the administration's nomination of Dr. Levine, whose expertise and experience make her highly qualified for this position," CenterLink CEO Denise Spivak said in a written statement. "Her nomination is groundbreaking and her ability to speak to the health needs of our diverse country is strong. We encourage the Senate to confirm Dr. Levine."

HRC stated that Levine's appointment shows that the administration is keeping its campaign promise of greater LGBTQ inclusion in government.

"With the reported historic nomination of Dr. Rachel Levine as assistant secretary of health, President-elect Joe Biden and Vice President-elect Kamala Harris have continued to keep their promise to create an administration that reflects the diversity and life experiences of America," HRC President Alphonso David stated Tuesday. "Dr. Rachel Levine, a highly experienced and qualified public health leader, has led Pennsylvania's public health response to the COVID-19 pandemic superbly. At a time when access to health care is a growing crisis for transgender people made worse by anti-LGBTQ legislation and legislators across the nation, Dr. Levine has the empathy to understand the health needs of our diverse country and the skillset to improve them."

Kaylah Williams, a bisexual woman who is the co-president of the Harvey Milk LGBTQ Democratic Club, expressed her joy at Levine's selection.

"That's amazing," Williams told the Bay Area Reporter January 19. "It's a huge step for representation, which is not the only thing that matters, but it shows the administration is trying to include people of different backgrounds.

"This is so important for trans young people," Williams added.