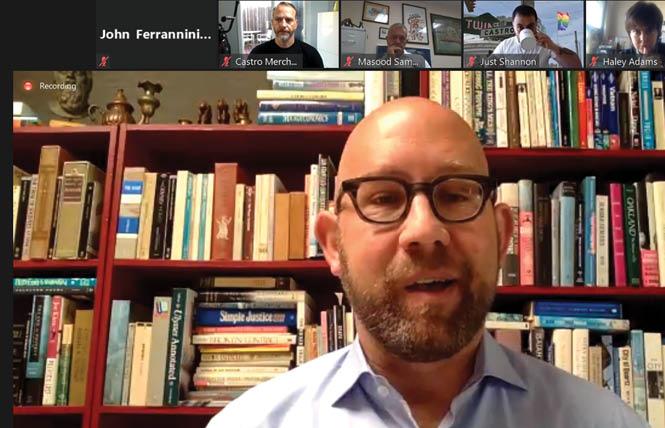 While the big news coming out of Thursday's virtual Castro Merchants association meeting was the cancelation of the in-person Castro Street Fair, other topics — such as the neighborhood's struggle with homelessness and the 18th Street closure — were discussed by city officials.

Gay District 8 Supervisor Rafael Mandelman said that he is "cautiously optimistic" the city has "turned the corner" on hospitalization rates following a rise in COVID-19 indicators that began in June.

"In the middle, end of June our rate of transmission went way up," Mandelman said. "It had something to do with reopening. ... We're still relatively high compared to the six months we've been dealing with this, but it's trending in the right direction."

Mandelman said that this may open the door to businesses reopening quicker than he'd anticipated, but that now is not the time for people to let down their guard.

A recent interactive map created by Georgia Tech professors shows how risky certain situations can be — as the San Francisco Chronicle reported August 5, there is about a one-third chance that any gathering of 25 people in San Francisco contains an individual who is COVID-positive.

San Francisco has had a total of 7,228 cases of COVID-19 reported to date, and 63 deaths, according to data from the Department of Emergency Management.

City addressing encampments
Mandelman said that the city is beginning to address the street encampments that members of the merchants' association and Castro residents have frequently complained about.

As the Bay Area Reporter previously reported, Mayor London Breed said at a special Castro Merchants meeting last month the Healthy Streets Operations team will come to the Castro, specifically to the encampment on 16th Street south of Market Street, and to Jane Warner Plaza.

At the beginning of the pandemic, city policy was not to forcibly move homeless tent encampments. Mandelman has previously said that the experience of having a safe sleeping site at Everett Middle School in his district was revelatory because when offered the opportunity for services, some unhoused people decided to stay where they were.

"City policies do seem to be changing," Mandelman said. "They will be breaking up encampments in order of severity, with the largest, most disruptive broken up first."

Mandelman went on to say he did not know where the encampments in his district are on that list. There are three in particular he knows of, however: on Dolores Street near Mission Dolores Park, the aforementioned 16th Street site, and in the Duboce Triangle.

As the B.A.R. also previously reported, the Duboce Triangle neighborhood has seen a marked increase in the number of unhoused people there since the start of the pandemic.

The supervisor went out of his way to say he does not want to be interpreted as merely repeating what is told to him by constituents.

"I do my best to echo and amplify the frustrations I'm hearing," he said. "I don't want that to be interpreted as me shrugging my shoulders and saying 'I'm upset too.' My expression of frustration doesn't mean I'm letting myself off the hook."

Mandelman said that as the city enters an "absolute budget disaster," people who have opinions about police funding and functions should "weigh in on some of those questions of budgetary priorities" regarding the ongoing movement to "defund the police."

Captain Gaetano Caltagirone of Mission Station attended the online meeting and said that crime has been up in the Castro recently. Castro Merchants President Masood Samereie speculated if it is because people have been released from jails due to the COVID-19 pandemic.

Caltagirone said he couldn't go as far as to say that the release of people in jail is the cause, but added that "we're keeping track of who is released because a lot of those individuals my officers did put in jail."

18th Street closure
Mandelman said he was excited to share that the proposed street closure of two blocks of 18th Street so that restaurants and bars will probably be approved next week. As the B.A.R. previously reported, it had been delayed for multiple reasons such as the necessity for fire department access to the proposed closed blocks of the street. Still, Mandelman urged caution.

"There's more of a risk of it becoming a giant street party — which I'd be in favor of in any other time." Mandelman said. "I don't want to add this to the photos of people behaving badly in my district that I have received."

Caltagirone indicated he was in favor of using outdoor seating to help beleaguered restaurants, such as on Valencia Street.

Michael Verdone, who owns property in the Castro, asked what could be done about the fact that the Bhoga Progressive Indian restaurant and bar at 468 Castro Street was not allowed to have sidewalk dining because the street was too steep.

"I was in Carmel last week and the street was just as steep and people were dining out there," Verdone said.

Mandelman aide Jacob Bintliff said that Bhoga needed the approval of the attorney for the Mayor's Office of Disability because the sidewalk gradation was a potential Americans with Disabilities Act issue, and that they'd be in touch.

Verdone was also worried that closing parts of 18th Street may take away business traffic from Castro Street restaurants.

"When Palo Alto closed University Avenue, the other restaurants lost all their business," he said.

Mandelman responded that the benefits of street closure to bringing business back to the neighborhood will hopefully benefit establishments nearby and not just on 18th Street itself.

"Hopefully, it will have positive benefits for businesses not in the area," he said. "It's something to monitor and keep track of."

Verdone's final comment was that he hoped property owners, such as himself, would not bear the brunt of what COVID-19 is costing the city. He said he had not received rent in almost five months.

"The situation for property owners is dire," Mandelman said. "Some folks understand that they're not getting new tenants if they can't keep what they have. A few landlords are not behaving in ways that are in their own self-interest and are destructive to the community."

Mandelman noted the recent passage of his legislation to once again allow bathhouses in San Francisco and said that potentially, "bathhouses can be part of the recovery."