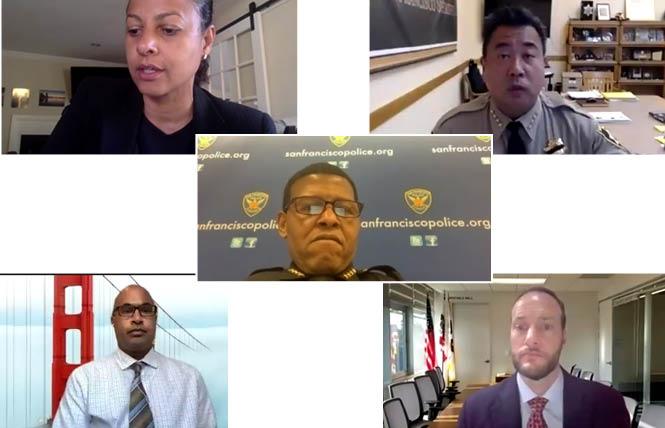 The Alice B. Toklas LGBT Democratic Club held a panel discussion Monday night featuring elected officials and San Francisco Police Chief William Scott discussing what can be changed in light of a tumultuous week in the public's relationships with law enforcement.

Many of the questions regarded how different elements in the criminal justice system affect LGBT people; the second touched upon an incident that occurred just last Thursday, when as the Bay Area Reporter previously reported, a nonbinary officer was reprimanded for wearing earrings in violation of a transphobic police dress code.

The officer — Rubin Rhodes — had worn earrings for years with only one previous incident. The day prior to being sent home for insubordination, however, Rhodes took a knee in front of the police department's Mission Station in solidarity with protesters demanding justice for black people killed by law enforcement.

While Scott could not speak to that incident specifically, he said he is open to changing police department policies that are outdated in the 21st century.

"Absolutely, it's time to revisit, and as a matter of fact, we've been investigating that for a while now," Scott said.

Before the novel coronavirus outbreak led to stay-at-home orders, Scott said he had "already started to put together focus groups and met with hundreds of people on these topics — earrings, beards, tattoos." Scott said he is reopening these meetings virtually.

"It's a way more far-reaching issue than just earrings," Scott said. "We are at a different time as a society and so these things need to be reconsidered."

Solis pushed back, however, regarding the focus groups — "should the public be dictating gender expression?" she asked — but told Scott he didn't have to come up with a response to that question during the panel discussion, though it was something to think about going forward.

The four law enforcement officials discussed the training that their departments give relating to the transgender community.

Boudin said that while his office has not given any trainings specific to that topic, he added that "we just hired a new manager, a queer woman of color, for trainings, including the one addressed in the question."

Boudin did not immediately respond to a request for comment about the identity of this new manager.

Boudin said that people who are marginalized — whether they are black, queer, or in another minority group — are more likely to be involved with the criminal justice system both as victims and people accused of crime.

"All of the justice and equity issues we talk about in the community manifest in the criminal justice system," Boudin said. "When we have discrimination in our society, the outcome of discrimination, often, is people are disadvantaged in ways that lead both to them becoming a victim of crime and being arrested and accused of crime."

An example Boudin gave of this dynamic comes from his time as a deputy public defender. Boudin's client, a queer, black man, was "savagely beaten" as a child to make him straight.

"It was a traumatic upbringing that he likely wouldn't have suffered if he'd been heterosexual," Boudin said.

Boudin went on to represent the man in an assault case.

Scott and Miyamoto said they understood the importance of statistical data in determining where to focus the attention of their departments; however, they cited logistical challenges when it comes to obtaining data on the sexual orientation of crime victims, except when it relates to hate crime data.

"To be quite frank, from a civil liberties perspective and from a policing perspective, I don't believe that's the best course of action," Scott said. "For good reason, most people don't want police officers prying into their personal lives."

Miyamoto said he agreed with Scott, but added that he wanted law enforcement everywhere to be more conscious of diversity.

"With the criminal justice reforms we want to see, we have to look to ourselves to make sure we are more reflective of our communities," Miyamoto said, adding he spoke to the New York State Department of Corrections and Community Supervision about policies in San Francisco jails relating to trans and nonbinary inmates.

"That's part of reform," Miyamoto said. "What can we do to cause reform on a larger scale, and not just here?"

Raju said that he asks his public defenders to spend time in the communities where their clients live.

"You have to be humble enough to know what you don't know," he said.

Defunding the police
In the wake of the May 25 Minneapolis police killing of George Floyd, which sparked the last few weeks of nationwide protest over law enforcement killings of black Americans, the rallying cry of "defund the police" has gained traction.

While an alternative suggestion to completely abolish police departments has also picked up steam, such as in Minneapolis, the call to reduce funding for police in favor of social services and on-ground investment in black communities and businesses has seen some success.

In San Francisco, Mayor London Breed and District 10 Supervisor Shamann Walton, who are both black, announced a plan June 4 "to prioritize the redirection of resources from the San Francisco Police Department to support the African American community in the upcoming budget" that will be submitted by the mayor to the Board of Supervisors on August 1.

When asked about defunding the police, Scott, who is black, said, "I have an open mind on that."

"Every department head is going to be protective of their budget, but we're at a time in policing where the whole world is talking to us, and we need to hear what's being said," Scott said.

"What's being said is that we have to change policing in this country," he added. "We have to think this through, to make sure whatever changes are thought through. These are going to be some very tough decisions but I'm open to it. There are opportunities for other agencies and entities to make communities safer.

"No matter how we get there, we want to be less dependent on policing," Scott said.

Miyamoto expressed similar views, saying that law enforcement are often asked to participate in matters that do not involve violations of criminal statutes.

"Both departments have staff who are first responders for medical issues — for saving people's lives with Narcan," Miyamoto said, referring to a drug given to people who are overdosing on opioids. "There's types of calls we need to be part of and others that would be best handled by others."

Boudin said that 911 calls should not always be answered by police.

The San Francisco Police Officers Association — a union representing SFPD officers — expressed its opposition to the Breed-Walton announcement via Twitter on June 8.

"Budget cuts to the police department," the tweet states. "From where? Emergency response times are already too long, open-air drug markets, national records for property crime and now gun crimes on the rise. Take it from where?"

Tony Montoya, a gay man who is the union's president, did not immediately respond to a request for comment on Scott's and Miyamoto's statements. After the online publication of this story, Montoya sent a statement to the B.A.R. expressing continued opposition.

"Every social experiment the city has tried has failed. Homelessness is worse. Drug dealing on our streets is worse. The calls to defund the police department will have a direct impact on the services we provide," Montoya stated in an email Tuesday afternoon. "Chief Scott needs to be honest about what budget cuts will do to the department; because residents we talk to, they say we don't have enough police services. They want their neighborhoods cleaned up and safe. Be honest. Be direct. And let the elected officials know what the impacts will be before you start taking an ax to the police budget.

"They need to be clear because platitudes and press conferences are not cutting it," Montoya added.

Scott and Miyamoto said that they have informal liaisons to the LGBT community. Scott said he would be open to giving someone the formal title of liaison, and that until March he had been meeting with the San Francisco Police Officers Pride Alliance on a monthly basis.

"I'm fully committed to continuing that discussion as the leader of this organization," Scott said.

Updated, 6/9/20: This article has been updated to include comments from SFPOA president Tony Montoya.