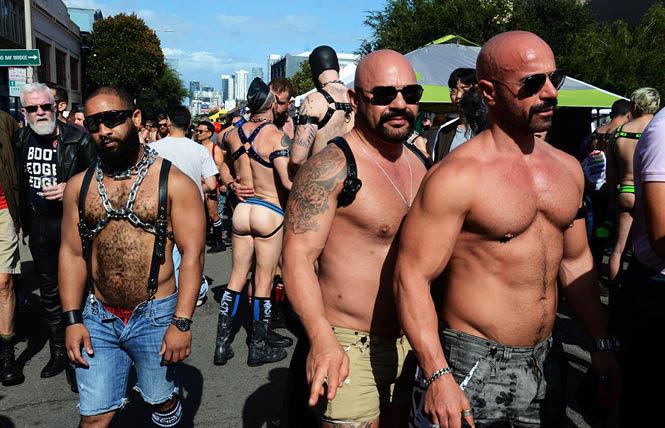 Folsom Street Events — producers of the Folsom Street and Up Your Alley fairs in San Francisco's South of Market district — announced April 27 that both events will be held virtually this year in light of the novel coronavirus outbreak.

Folsom Street Events, which distributes proceeds from its events to other nonprofits, including those serving the LGBTQ and HIV/AIDS communities, explained its decision in a news release.

Angel Adeyoha, the interim executive director of Folsom Street Events, had previously told the Bay Area Reporter that a decision as to the fate of the two leather and kink events would be decided by that date.

"We feel it is the ethical and the responsible choice to make before fair planning and production proceeds any further. The safety and well-being of our attendees and community members are our top priority," Adeyoha said in Monday's release. "It was a hard decision to cancel our in-person events this year, but we hold ourselves and our events to the highest safety standards. Our team of staff and board members take their responsibility to our communities incredibly seriously."

The fairs bring over $200 million in business to San Francisco, according to the release. This is the Folsom Street Fair's 37th year, and the 35th for Up Your Alley (sometimes popularly referred to as Dore Alley). It donates hundreds of thousands of dollars annually to other nonprofits.

"I know the cancellation of in-person celebrations of the Folsom Street Fair and Up Your Alley is disappointing, but it is best for the health and safety of everyone involved," San Francisco Mayor London Breed said in the release. "I want to thank Folsom Street Events for their careful consideration of the current situation, and for making a decision that is in the best interest of public health but still allows people to celebrate virtually."

Governor Gavin Newsom said April 14 that it is highly unlikely that large gatherings can occur in the state of California before residents can either establish herd immunity to or can be vaccinated for the novel coronavirus, which in the span of weeks has now killed more Americans than died in the Vietnam War.

Silicon Valley Pride (in August) and Oakland Pride (in September) have not yet made decisions.

Up Your Alley and the Folsom Street Fair will be held over the weekends of July 26 and September 27, respectively, the release stated.