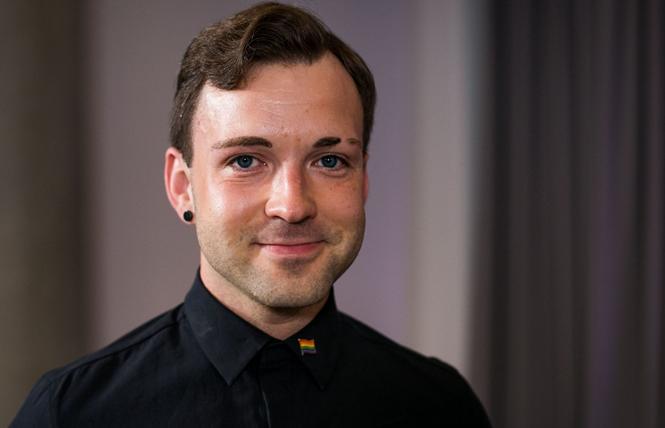 Thousands of protesters turned out to demonstrate against a proposed same-sex civil partnerships bill that members of Lithuania's Parliament are anticipated to debate next month.

The May 15 event, dubbed the "family defense march," brought out an estimated 10,000 people to the streets of Vilnius, Lithuania's capital, local police reported.

Demonstrators risked arrest and fines for going against a ban on public gatherings in response to a surge of COVID infections in order to express their belief that same-sex unions are a threat to traditional family values in the Roman Catholic-majority country.

The bill, proposed by Tomas Vytautas Raskevicius, a gay Member of Parliament, is based on the country's Constitutional Court affirming that the "definition of family is not restricted to different-sex couples," according to the Lithuania report of the International Lesbian, Gay, Bisexual, Trans and Intersex Association's 2021 Rainbow Map and Index published May 17.

According to the report, seven of the 17 political parties that vied for seats in Parliament supported civil unions for same-sex couples; only one party supported same-sex marriage. The winning party, Homeland Union, was fractured on the issue. The bill was introduced as a condition for allowing the opposition Liberal Party to join the coalition.

The bill would grant same-sex couples inheritance rights, joint ownership of property, procedural guarantees and the option to change their surnames if passed. The bill does not grant family rights, such as the right to adopt children.

Same-sex marriage is constitutionally banned in Lithuania. The law only recognizes marriage as a union between a man and a woman. In 2015, Lithuania's parliament rejected a civil unions bill.

Leaders of the Roman Catholic Church in Lithuania called on the new coalition not to recognize same-sex couples as families last December, according to the report.

President Gitanas Nauseda, a centrist, attempted to calm the masses, issuing a statement over the weekend that any law recognizing same-sex couples must be in accordance with the constitution, reported Agence France-Presse. Raskevicius believes Lithuania will legalize civil partnerships for same-sex couples before the next parliamentary election in 2024, reported Reuters.

Raskevicius is Lithuania's second openly gay member of Parliament. The human rights expert is also chairman of parliament's human rights committee. Rokas Zilinskas, the country's first openly gay MP, came out after being elected and before taking his seat in Parliament. He died in 2017. Raskevicius was the first to campaign openly as a gay man and in drag for his seat in Parliament as a member of the newly formed Freedom Party. The progressive party advocates for LGBTQ rights, environmental issues, and decriminalization of drugs.

Support for marriage equality still ranks low among the country's 2.8 million Lithuanians. Only 30% believe same-sex couples should be allowed to marry, according to a 2019 Eurobarometer survey. Homosexuality was decriminalized in 1993.

In 2003, LGBTQ Lithuanians were granted protection from workplace discrimination, yet 71% of LGBTQ Lithuanians remain uncomfortable being out in the workplace, according to a 2014 European Union Agency for Fundamental Rights report, the most recent data available.

However, the "Protection of Minors" law, which prevents the discussion of homosexuality with children, is still on the books. The European Court of Human Rights is currently reviewing the law. Lithuania joined the European Union in 2004.

Measuring readiness for marriage equality, Raskevicius estimated it could be up to a decade for the former Soviet bloc country and that gaining support for a constitutional amendment for same-sex marriage would be a struggle within the coming years, he told Reuters. Voters might have accepted his bid for Parliament campaigning in drag, but it is not ready for same-sex couples to say, "I do."

The bill has split the conservative-led coalition government, but there could be enough support among lawmakers, despite some members of the Homeland Union party declaring they will not support the bill. Members of the second largest majority party, the Lithuanian Farmers and Greens Union, have publicly spoken out against recognizing same-sex couples, according to the ILGA-Europe report.

Raskevicius believes there are still enough votes to pass the bill if it gains support from governing liberals and opposition social democrats.

"We're going to look for some additional votes from the opposition, but I think we should be fine," Raskevicius told Out magazine.

"It is deeply worrying to report an almost complete standstill on LGBTI rights and equality, especially at such a critical time for LGBTI communities," said Evelyne Paradis, executive director of ILGA-Europe, in a news release from the organization. "In the past year, we've seen increased political repression against LGBTI people, a stark rise in socio-economic hardship, and the spreading of LGBTI-phobic hatred on the streets and online across the region.

"Against this backdrop, the response from governments has to be more and better concrete action, to make sure people are more protected, not less," she added.

The organization released its annual report Monday marking International Day Against Homophobia, Transphobia, Biphobia, and Intersexphobia. The report has been published since 2009.

According to the 2021 Rainbow Europe Map and Index within the last 12 months gains in LGBTQ rights have come to a near standstill, found ILGA-Europe, the European arm of the ILGA World, a global LGBTQ advocacy organization. The index documents, ranks, and maps 49 European countries' sexual orientation and gender identity legal and policy status.

The organization called the past year "unprecedented" noting "almost no positive legislative change for LGBTI people in Europe," according to the release.

The news comes despite the European Union's five-year strategic plan to increase LGBTQ rights throughout the union that was announced last November.

ILGA-Europe found that not a single country progressed toward legally recognizing partnerships or parenthood recognitions. Iceland was the only country to make progress on transgender rights. Albania, Finland, and Portugal moved up in the rankings due to "very small changes" implemented in the countries' laws protecting LGBTQ people. Some countries, like Bosnia and Herzegovina and North Macedonia, strengthened freedom of assembly by improving safety at public LGBTQ events.

"It would be easy to blame it all on political attention being immersed in the public health response to COVID-19 and the ensuing economic fall-out, but the reality is a lot more complex," she said.

Hugendubel pointed to "increased political polarization on LGBTI issues" because "some elected officials no longer see gains to be made by supporting LGBTI equality" and LGBTQ rights are not prioritized by governments.

Paradis believes Europe is at a critical juncture where governments can do the "right thing and take real action."

At least 15 countries have legislative proposals, action plans, and policy discussions already on the table, she noted.

"At a juncture in history when anti-LGBTI forces are rife, not only in headline-grabbing countries like Poland and Hungary, but across Europe, LGBTI people need all governments to seize this moment and make sure Europe remains a committed and active leader in the arena of human rights for everyone," Paradis said.

Hong Kong trans survey prompts calls for anti-discrimination legislation
Suicide, physical assault, sexual harassment - these are some of the things transgender people in Hong Kong experience, according to the largest survey of its kind there. Hong Kong has been a special administrative region of the People's Republic of China since 1997 when the British handed over the former colony, forming "one country, two systems."

More than three-quarters of the 234 transgender people surveyed have contemplated suicide, according to the new 13-page survey, "Excluded Lives: the Largest Scale Survey on the Social and Legal Marginalisation of Transgender People in Hong Kong," published by the Chinese University of Hong Kong May 12.

Researchers found that 76% encountered some form of rejection in their daily life and 62% had been victimized. Nearly one in 10 respondents reported being victims of physical attacks in public toilets. The same proportion reported experiencing sexual harassment. The report's findings renewed advocates calls for anti-discrimination legislation protecting gender identity.

Suen Yiu-tung said the new survey was done between 2019 and 2020 and will provide empirical evidence for policy design and legal debates. Hong Kong does not maintain data on transgender citizens.

In another survey conducted between 2010 and 2015 by Suen Yiu-tung, he found at least 495 people diagnosed with gender identity disorder, reported the Post.

The findings are limited. The survey did not include people avoiding treatment or who travel outside of Hong Kong to receive treatment, such as gender confirmation surgery, reported the Post.

Two trans women sentenced to prison in Cameroon
Two Cameroonian transgender women were given the maximum sentence in prison and fined after they were convicted of "attempted homosexuality" and public indecency.

On May 11, a judge found Shakiro and Patricia, 27, who were deadnamed in police records, guilty for allegedly kissing each other in public and sentenced them each to five years in prison.

They were additionally charged with failure to provide proof of identity and fined a maximum of $370 (200,000 CFA francs), reported the New York Times.

LGBTQ ally attorney Alice Nkom, who represents the women, who only go by single names, appealed the ruling, denouncing the verdict as politically motivated. She called for their release. Human Rights Watch also denounced the two women's sentencing.

Shakiro, 23, is a social media personality who advocated for more tolerance of gender-nonconforming people through her social media posts to her thousands of fans. Shakiro's mother, Joséphine Marie Njeukam, who visited her daughter May 12, told the Times that her daughter did not "kill" anyone or "steal" — her sexuality "shouldn't be a crime. Since the verdict, Shakiro has stopped eating and expressed suicidal plans," Njeukam said.

The Western African nation is one of more than 30 countries on the continent that criminalize homosexuality.

The two women were arrested in Douala while they were out dining at a restaurant February 8. According to police interrogation records viewed by the Times, passersby called the police, complaining that the two transgender women were kissing. Police responded to the call.

Nkom accused the police of using discriminatory language against her clients. A transcript of the interrogation documented one of the officers expressing surprise "seeing women with male names," asked Shakiro why she dressed as a woman, and repeatedly asked her, "What does transgender mean?" after she identified herself as transgender.

Nkom said the ruling sent a pernicious message to Cameroonians. "It says, 'If you don't like someone's appearance because they are different, you can just call the police, and they'll have them arrested,'" she told the Times.

Cameroonian authorities have been targeting the West African nation's LGBTQ community in a wave of crackdowns since last year, from individual arrests to raids on organizations, according to human rights organizations.

"These recent arrests and abuses raise serious concerns about a new upsurge in anti-LGBT persecution in Cameroon," HRW Associate LGBT Rights Director Neela Ghoshal said in the brief. "The law criminalizing same-sex conduct puts LGBT people at a heightened risk of being mistreated, tortured, and assaulted without any consequences for the abusers."

Out in the World: US embassies to fly Pride flag again
Sign up!