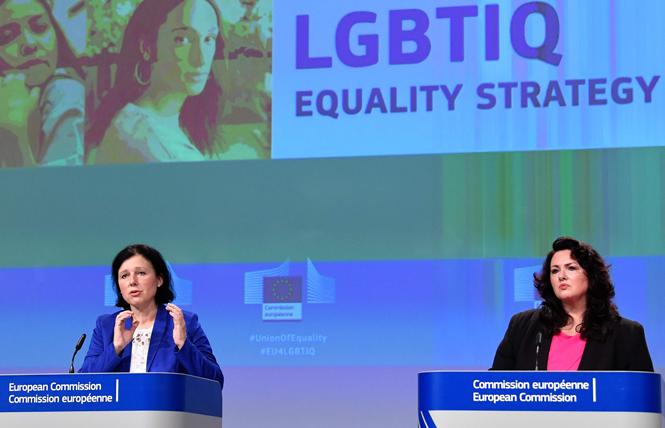 The European Commission announced on November 12 an effort to strengthen the rights of LGBTQ people in response to a wave of anti-LGBTQ discrimination, especially by right-wing governments in Hungary and Poland. Photo: Courtesy John Thys/Pool

The European Union is increasing its efforts to become a global leader in LGBTQ rights in order to push back against a rising tide of hate against queer people.

"The way we are born is not ideology: it's nature, it's biology, it's science," Dalli continued. "And despite this, the experience of discrimination against LGBTIQ people in the E.U. increased in recent years."

Acceptance of LGBTQ people in Europe rose from 71% to 76% in 2019, according to numbers the commission cited in the plan, but it had gone down in nine member states.

The European Union Agency for Fundamental Rights 2019 survey, cited in the plan, found that perception of discrimination against LGBTQ people was increasing, with 43% of LGBTQ people declaring they felt discriminated against in 2019, as compared to 37% in 2012.

Within the past 12 months "38% of LGBTI people experienced hate motivated harassment based on being LGBTI," according to the commission. During the past five years, 22% of intersex people reported being physically and/or sexually attacked for who they are.

The European Commission, the EU's executive branch, identified a lack of reporting of incidents to any organization, including the policy and equality bodies. Only "21% of LGBTI victims of hate-motivated physical or sexual violence reported in the past five years," according to the plan.

This is "about love," said Vera Jourova, the European Commission's vice president for values and transparency, introducing the "Union of Equality: LGBTIQ Equality Strategy 2020-2025."

Responding to hate
"Too many people cannot be themselves without fears of discrimination, exclusion, or violence," Jourova said at the press conference.

The commission stated in the plan that it was adopting the strategy "at a time where we are witnessing the erosion or backsliding of fundamental rights in some member states."

"It is imperative that member states react quickly to reverse these new developments," the commission continued, expressing the E.U.'s desire to "be at the forefront of efforts to better protect LGBTIQ people's rights."

"It's 2020, hate and discrimination of people from sexual minorities really does not belong to Europe," Jourova said.

However, the commission recognizes there is much work that needs to be done to achieve equality for LGBTQ people throughout Europe, citing recent verbal and legal attacks from country leaders, particularly in Poland and Hungary.

"We are still a long way away from the full inclusion and acceptance that LGBTQI people deserve. Together with the [E.U.] member states, I trust we can make Europe a better and safer place for all," Dalli said at the news conference.

The plan
The comprehensive plan aims to institutionalize LGBTQ protections to meet international human rights standards throughout all 27 member states. E.U. officials plan to implement and enforce the laws consistently across the union, according to the plan.

The 25-page strategy targets four major areas to tackle discrimination, ensure safety, build inclusivity, and to lead the "call for LGBTIQ equality around the world."

The commission's inclusive strategy is to improve upon existing laws and policies to bring all states up to E.U. and international standards of equality and to fill gaps where legal protections do not currently exist for LGBTQ people, nonbinary, and intersex people.

Among the ambitious plan's goals are protecting rights in the workplace, same-sex families, workplace protections, and victims of hate crimes based on their sexual orientation or gender identity.

The commission's immediate goal is to propose a new comprehensive Digital Services Act to extend the E.U.'s General Data Protection Regulation (Article 83) before the end of the year. The proposed law will have a wide scope to address disinformation and freedom of the media, election interference and manipulation to hate crimes and hate speech, according to the plan.

Under the proposed law, perpetrators of hate crimes, including verbal, physical, or disinformation campaigns, against LGBTQ people could be prosecuted.

Member states promoting the E.U.'s core values, such as democracy, equality, and freedom, could be rewarded with more funding.

The E.U. could withhold funds from member states that do not comply.

Earlier this year, the E.U. withheld funding from six Polish cities that proclaim to be "LGBT-free zones" due to promoting homophobia.

Poland supplemented the missing funds to the cities.

According to the new plan, the E.U. will increase its vigilance and enforcement of laws protecting LGBTQ people.

However, the E.U.'s legal powers are limited, noted the New York Times, due to its recommendations not being binding on member states. New laws will have to be approved by the European Parliament and national governments before they can be enforced, especially on non-compliant states, the newspaper reported.

Challenges ahead
Implementing the law will be challenging, particularly with Poland and Hungary, where the Roman Catholic Church and religious conservatives have a tight grip on the societies.

Poland's President Andrzej Duda and Jaroslaw Kaczynski, the chairman of the ruling ultra-conservative Law and Justice party, scapegoated the country's LGBTQ community throughout Duda's reelection campaign by calling LGBTQ rights an "ideology" and supported towns claiming to be LGBT-free zones.

Kaczynski called homosexuality a "threat to Polish identity, to our nation, to its existence and thus to the Polish state."

Duda criticized the E.U. for withholding funding to the Polish cities, calling the action "lawless and ideologically motivated."

Activists have reported anti-LGBTQ attacks have surged, and the country is experiencing its largest protests since the fall of communism in 1989, reported the Times.

"We are talking about physical violence, beatings, insults, but also destruction of offices of activists," Mirka Makuchowska from the Campaign Against Homophobia, an advocacy group, told the paper.

The protests grew from women's outrage over the Polish court's ban on abortions and also encompasses LGBTQ rights.

Poland was ranked as the most homophobic country in the E.U. by the International Lesbian, Gay, Bisexual, Trans and Intersex Association of Europe's 2020 survey.

"In the past year and a half, they have become more vocal about their opposition to LGBTQI rights, and increasingly against trans people," Tamas Dombos with Hungarian transgender advocacy group Hatter Tarsasag, told the Times.

Progress
Italy, Malta, and the Republic of North Macedonia are heading in the opposite direction.

Italy's extension of its anti-discrimination and hate crime bill to protect women, differently abled and LGBTQ people was passed by the country's lower house of parliament earlier this month. It will be considered by the senate in 2021.

The Catholic Church and right-wing parties oppose the bill.

Demonstrators on both sides have taken to Italy's streets for heated protests this month.

The same day the E.U. announced its plan, Malta and North Macedonia announced their membership into the UN LGBTI Core Group.

That brings the core group to a total of 33 states and the delegation of the E.U., according to OutRight Action International's November 12 news release announcing the new members.

Dalli urged E.U. member countries that do not have a national LGBTQ equality strategy to adopt one to meet its citizens' needs.

The commission will monitor and review the plan's progress and publish a new Eurobarometer on discrimination in the E.U. in 2023.

That will be followed up by a comprehensive LGBTIQ survey in 2024, conducted by the E.U. Agency for Fundamental Rights.

To read the EU LGBTQ strategy, click here.
.
Got international LGBTQ news tips? Call or send them to Heather Cassell at WhatsApp: 415-517-7239, Skype: heather.cassell, or oitwnews@gmail.com

Out in the World: EU leaders lash out at Hungary, launch legal action
Sign up!