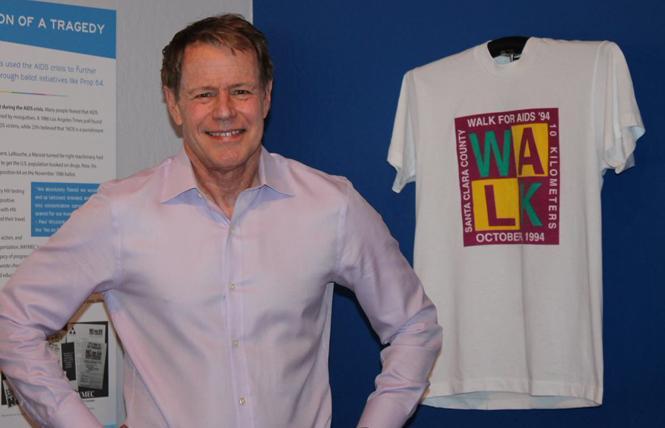 BAYMEC Foundation Executive Director and former Santa Clara County supervisor Ken Yeager stands near a T-shirt from the 1984 Santa Clara County AIDS Walk that is part of the "Coming Out: 50 Years of Queer Resistance and Resilience in Silicon Valley" exhibit in San Jose. Photo: Heather Cassell

LGBTQ history projects across the Golden State, from digitizing periodicals and films to preserving archival material related to gay rodeos and Santa Cruz's LGBTQ community, are receiving $750,000 in grant funding from the California State Library. It is the second time since 2019 that the state has allocated funds to such projects.

Three years ago state lawmakers allocated $500,000 toward the Preserving California's LGBTQ History grant program. The bulk of the funds went to projects in San Diego, Los Angeles, and San Francisco, such as nearly $15,000 awarded to the UCSF Archives and Special Collections for its "Documenting the LGBTQ Health Equity Movement in California" project.

A request from LGBTQ archival groups that state leaders renew the $500,000 in the fiscal year that began July 1, 2020, was denied, as previously noted by the Bay Area Reporter. Led by the GLBT Historical Society based in San Francisco, the organizations beseeched lawmakers in Sacramento last year to once again provide them funding assistance since the COVID-19 pandemic had forced them to close to the public and upended their revenue streams.

They upped their ask by $250,000, and the full $750,000 survived the 2021 budgetary negotiations to be included in the current fiscal year that began July 1. In November, the state library announced groups could apply for the funding.

"There are many stories that explain who California is and who we're becoming. The contributions of the LGBTQ+ community and the evolution in California's attitudes toward them are important stories to share. These grants will help do that," State Librarian Greg Lucas stated at the time.

This year's awards, which the state library shared with the B.A.R. ahead of their being publicly announced this week, are more geographically diverse than the previous ones. For instance, the California State University Dominguez Hills Foundation is receiving $100,000 to catalog and digitize its LGBTQ collections relating to work, activism, and publications. The funds will allow it to hire an archivist and have an LGBTQ speakers' series of four events.

The UC Davis Library's Gay and Lesbian History and Culture Collection will receive $18,000 to digitize and preserve its trove of rare, historical LGBTQ+ newspapers, magazines, and other periodicals. It aims to increase access to the material, in particular among those researching LGBTQ+ history in California and the U.S.

The Santa Cruz Museum of Art and History at the McPherson Center is being awarded $91,029 for its project "Queerstory: Preserving & Promoting the History of the LGBTQ+ Community in Santa Cruz." It is digitizing and publishing online a collection of photographs, printed materials, and audiovisual components that document LGBTQ+ leaders, communities, activism, and triumphs in Santa Cruz County from 1974 to present.

It is working on the project in partnership with The Diversity Center, which donated much of the collection and continues to collect new materials for it. In October, the museum launched its first online exhibit "Queer Santa Cruz" that runs through September 24, 2023.

Since opening virtually the exhibit is now also accessible at the museum. Gay state Senator John Laird (D-Santa Cruz), a former mayor of the coastal city, donated photos he had of Pride events in the 1980s and can be heard in a recording posted to the "Law & Policies" page of the online version.

"I've got a lot of things I hope to be able to give them if I ever have a chance to go through my personal archives," Laird told the B.A.R.

The LGBTQ archival funding request had gone through a budget subcommittee Laird chaired last year. He told the B.A.R. that it had been a priority for the Legislative LGBTQ Caucus, and recently apprised of how the funds would be distributed, was "pleased" to see the grants were not clustered in major urban areas.

South Bay
In Santa Clara County the BAYMEC Community Foundation is receiving $61,250 toward its efforts to document queer activism in Silicon Valley. The philanthropic arm of the Bay Area Municipal Elections Committee, the South Bay's LGBTQ political organization known as BAYMEC, opened an LGBTQ history exhibit last June, as the B.A.R. reported at the time.

Under the leadership of gay former county supervisor Ken Yeager, who co-founded BAYMEC, the foundation has been chronicling LGBTQ history in the South Bay not only via the exhibition but also on its website Queer Silicon Valley. It also premiered the documentary "Queer Silicon Valley: our community, history, and activism" last month.

Yeager told the B.A.R. the state funding will help to digitize the various archival material he has collected over the last 40 years, as well as new material people have donated to the foundation, now housed in his garage. In addition to being made available to researchers online, the material will eventually be housed at the San Jose State University Special Collections & Archives at the college's Dr. Martin Luther King Jr. Library.

"I am very excited about it. I am glad the foundation exists. We are trying to preserve this history, so we were eager to get at least some of the money being distributed throughout the state," said Yeager. "When the foundation didn't exist, we couldn't apply. Now that it has been in existence three years, we are able to take advantage of this."

Other areas
The Autry Museum of the American West in Los Angeles' Griffith Park is receiving $57,056 to make publicly accessible its holdings related to the California Gay Rodeo. In addition to cataloging and digitizing the materials, the museum plans to host public programming, a research fellowship, and install an exhibit about the LGBTQ+ rodeo community in the state.

The GLBT Historical Society in San Francisco is receiving $100,000 to complete the second phase of its digital asset management system. It includes building 10 new digital collections; processing and digitizing selections from its LGBTQ Film and Video Collection; and hosting two public events focused on how to use the digital resources and showcase the materials in its archives.

The Lambda Archives of San Diego is being granted $71,835 to preserve and provide wider public access to its materials documenting California's LGBTQ history, with an emphasis on queer, trans, intersex, Black and Indigenous people, and people of color. It also aims to empower an archiving community dedicated to unearthing the histories of groups that have been excluded and/or misrepresented.

The June L. Mazer Lesbian Archives is being awarded $88,935 to physically process 297 banker boxes of unique lesbian and feminist material and make it publicly accessible. It also plans to transfer five collections to UCLA so they are more available to researchers and the general public.

The ONE Archives at University of Southern California is receiving $134,947 to make more accessible its historical collections documenting diverse LGBTQ+ communities, including those housed in the USC Digital Library and Calisphere. In addition to highlighting less-visible facets of California LGBTQ+ and BIPOC histories, it plans to support K-12 instruction, university research and teaching, exhibitions, and media projects on those topics.

Two other grants, for projects related to Black LGBTQ history and another to transgender history, are still being finalized and should be announced this week.