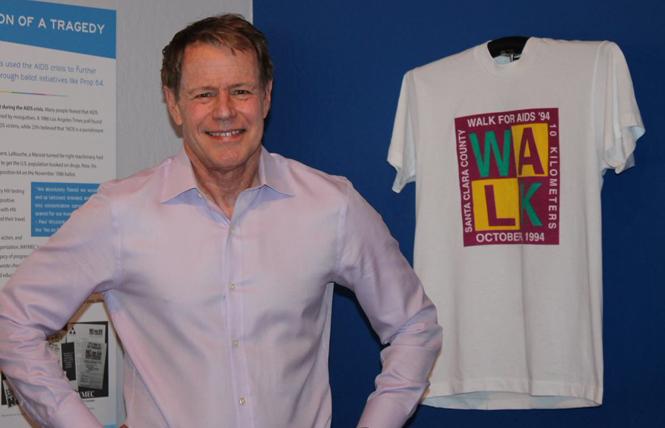 Silicon Valley's LGBTQ community and others will be able to take a trip back in time this Pride weekend with a new historical exhibit about the region's history.

"Coming Out: 50 Years of Queer Resistance and Resilience in Silicon Valley" opens free to the public Saturday, June 26, at the Arbuckle Gallery on the ground floor of the Pacific Hotel in San Jose's History Park.

The opening weekend coincides with the sixth anniversary of the United States Supreme Court's decision in Obergefell v. Hodges that legalized same-sex marriage nationwide and with Pride celebrations globally that commemorate the 1969 Stonewall riots in New York City.

Ken Yeager, 68, who spearheaded the exhibit and is its director, hopes "Coming Out" will memorialize the work for the generation of LGBTQ activists who were a part of the movement.

"There isn't really a place that an older LGBTQ person can go to see their history or see something that they were part of making," said the gay former Santa Clara County supervisor about the South Bay. "I hope that people can come and share those stories and those emotions."

Yeager, who also served on the San Jose City Council, hopes to teach younger generations about the South Bay's LGBTQ past.

"Here they get to see 50 years worth of fighting," Yeager said.

"It's important that people know there's a gay history, that there are stories that need to be told and appreciated," he said, adding that there is "so much more we have to do ... here in Silicon Valley."

Contracted curator Amy Cohen, executive director of Exhibit Envoy, an exhibition company for small and traveling exhibits, said she was honored to work on the project.

The 32-year-old ally believes people will be surprised to learn about the "impact that the Santa Clara Valley actually had in LGBTQ history."

Cohen noted the activism is masked by the valley's urban sprawl and lack of centralization, unlike San Francisco's Castro LGBTQ district that attracts a majority of the historical attention.

"What I learned through this exhibit is how forward thinking a lot of LGBTQ activists are in the valley," she said.

The exhibit
The Bay Area Reporter got a sneak peek at "Coming Out" during its June 18 installation.

Cohen was moved by Bruce Schuyler's DD214 form that is displayed on loan and the story about how he struggled following being given a "blue discharge" from the military in 1962. (The discharge, neither honorable nor dishonorable, was disproportionately given to gays and African Americans.)

"Seeing in one costume that duality of male and female together, kind of breaking through stereotypes, is very powerful," Cohen said.

The exhibit was scheduled to open in 2020, but the global COVID-19 pandemic delayed it for a year.

The unexpected delay became a boon for Yeager, executive director of the BAYMEC Community Foundation, who is overseeing the exhibit as a project of the foundation.

Despite being a lifetime in the making for Yeager, the year delay made the exhibit better. He was able to gather more than 200 entries on the timeline, more than 150 stories and posts, and added 41 organizations to the virtual exhibit at Queer Silicon Valley.

He also added material to the live exhibit working with Cohen.

The exhibit is supported and overseen by the BAYMEC foundation with an initial $60,000 grant from the Santa Clara County's Historic Grant Program, and donations from community foundations, and donations by city officials and individuals, Yeager told the B.A.R.

A life retrospective
A longtime political activist and politician, Yeager termed out of office in 2018 after a storied 26-year career establishing and being involved with many of the South Bay's LGBTQ institutions.

Searching for a new project, the self-professed collector and writer turned to his garage where he had "huge cabinets full of gay history," he said. Then an opportunity for a grant from the county appeared, he told the B.A.R.

Up to now the only documented history of Silicon Valley's LGBTQ community was in Ted Sahl's 2002 book, "From Closet to Community: A Quest for Gay & Lesbian Liberation in San Jose and Santa Clara County," Yeager said.

"It's wonderful that we have that," he added, but "I've lived so much of it."

Additionally, he noted the book ended with the beginning of the 21st century. There are two decades worth of activism and progress to account for in the new century.

"I was able to make it all come together," said Yeager, who donated nearly 40 of the 50 years of the exhibit's materials directly from his collection in addition to gathering community members' stories and receiving historical personal items on loan.

The fact that his life story is being encased and put on display in a museum has not hit him yet due to putting the exhibit together.

"I've always been political," said Yeager, who earned a degree in political science from San Jose State University. "I get it from my mother, like a good gay son."

However, Yeager wasn't involved in gay politics during the early years of his career.

The decade kicked off in the valley with bitter battles over anti-discrimination, HIV/AIDS, and more.

Many people continued to live deeply in the closet. HIV/AIDS was ravaging the gay and bisexual male community, and the community was continuously under attack by conservatives.

It was that political fear-mongering that brought Yeager into the South Bay's queer political movement in 1984.

"I didn't realize until they were going after 'me,' that I had to turn that energy outward," said Yeager, who was "just doing mainstream politics" until then-California Governor George Deukmejian was debating signing Assembly Bill 1, which would have prohibited employment discrimination against homosexuals in California.

It galvanized Yeager to use his political skills to advocate for the valley's LGBTQ community and his own rights.

Yeager stood up and said, "If I don't stand up for myself then nobody else will. I hadn't really crossed the road to work on gay issues," until that moment.

By 1986, Yeager was deeply involved in the South Bay's LGBTQ politics with lesbian political activists Wiggsy Sivertsen and gay Peninsula political activist Rich Gordon, who later served on the San Mateo County Board of Supervisors and in the state Assembly. The dream team spearheaded the successful "No on 64" campaign and co-founded the Bay Area Municipal Elections Committee, simply known as BAYMEC, the South Bay's LGBTQ political organization.

California Proposition 64 in 1986 would have mandated HIV testing, imposed a registry for anyone who tested positive, and discriminated against HIV-positive people. Voters rejected it.

Those battles were the "nadir," for the LGBTQ organizations that "rose from the ashes," recalled Yeager, and created the cultural activities that gave "us a sense of purpose and pride after being told how sinful we all were." That pride, that "sense of worth," he said, is "really reflected in the exhibit."

The exhibit will be up for a year, but Yeager hopes to grow the collection and find a permanent home for it, as well as send it on a tour to city halls and libraries after it closes.

The exhibit is free to the public with reserved timed tickets, due to the pandemic, Saturdays and Sundays from noon to 4 p.m., through June 26, 2022.

Visitors will be required to register for a timed ticket and to wear masks while viewing the exhibit in the gallery and relaxing in the Fox Den, a room across from the gallery where people will be able to talk and contribute their own memories and stories of Silicon Valley queer history.

For more information and to reserve a ticket, click here.

For more information or to see the virtual exhibit, click here.becoming a BAR member.