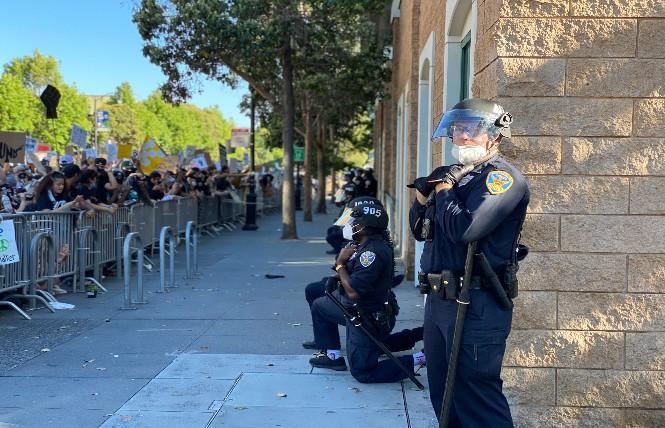 Outside Mission Station, some San Francisco Police officers take a knee, while one does not, during a June 3 protest against the police killing of George Floyd in Minneapolis. Photo: John Ferrannini

After a nonbinary San Francisco police officer was reprimanded for wearing earrings on the job, city officials are pledging to revise the transphobic dress code used by the police department.

A day after Officer Rubin Rhodes took a knee in front of the police department's Mission Station in solidarity with protesters demanding justice for African Americans killed by police officers, Rhodes was sent home for insubordination reportedly for wearing earrings.

Department policy prohibits male officers from wearing earrings on-duty. Rhodes told the San Francisco Examiner, which first reported on his being reprimanded Friday, that he has worn earrings to work most days over the last five years and his doing so had only been an issue once before. According to the article, Rhodes wouldn't characterize his being sent home as retaliation but did call it "nonsensical."

"Why would you send somebody home for an earring?" Rhodes told the paper, adding that the dress code policy "is inherently sexist and discriminatory."

The Bay Area Reporter could not reach Rhodes for comment Saturday morning. According to the Examiner article, Rhodes refers to himself as a black man and uses male pronouns but last year updated his driver's license to indicate he is nonbinary and alerted his bosses about his gender identity.

He told the Examiner that he had alerted the department's command staff about the outdated dress code and believed Chief William Scott planned to remove any mention of gender.

Scott, who is also a black man and took a knee during a demonstration against police brutality in front of City Hall earlier this week along with Mayor London Breed, is working to revise the dress code policy, according to a statement from Matt Dorsey, the department's communications director.

Rhodes is assigned to Mission Station, which is responsible for patrolling the city's LGBT Castro district. Gay District 8 Supervisor Rafael Mandelman, who represents the neighborhood, did not address the B.A.R.'s question if there needs to be a change in leadership at the station.

But in a response via Twitter, Mandelman was adamant that the department's dress code policy needs to change. Known as Department General Orders, the rules do not account for transgender or nonbinary officers and one issued in 2007 that covers jewelry only allows "female officers" to wear one earring in each ear.

"No. Absolutely not. There shouldn't be gendered dress codes in our police department in 2020," replied Mandelman. "I was there when Officer Rhodes kneeled in solidarity with protestors on Wednesday and was moved by his actions."

Other city officials also spoke out on Twitter in reaction to the Examiner's article about Rhodes. District Attorney Chesa Boudin wrote, "This does not feel like reform" and added an emoji for a questioning face.

District 9 Supervisor Hillary Ronen, who represents the Mission, wrote that it "looks like retaliation against Officer Rubin Rhodes for having taken a knee in solidarity with the protesters mixed with some serious gender and sexuality discrimination. We need an investigation and answers."

And District 6 Supervisor Matt Haney simply responded, "This is outrageous."

According to the police department's statement, its revision of the dress code policy is part of a "voluntary, department-wide Collaborative Reform Initiative" it is conducting in coordination with the California Department of Justice. Scott has also been working with Herrera's office, police officers and community members on updating various department policies that will be submitted to the San Francisco Police Commission for review and adoption at one of its upcoming public meetings, Dorsey told the B.A.R.

"It bears mentioning that these policies are not limited to jewelry, but include such related standards as facial hair, tattoos and other allowable personal accessories," he stated.

Dorsey also noted that numerous members of the police department in addition to Scott and Rhodes, including other members of the command staff and and several other police officers at Mission Station and elsewhere, have knelt publicly in the past week to honor George Floyd. It was Floyd's killing by Minneapolis police May 25 that sparked nationwide protests against police violence on a scale not seen in the United States in decades.

"As Chief Scott has noted, the gesture (where safe and appropriate) is consistent with SFPD's Community Policing policies that encourage officers to demonstrate empathy and understanding for the diverse communities they serve; to involve themselves in community events where possible; and at all times to affirm the dignity and sanctity of human life," stated Dorsey.