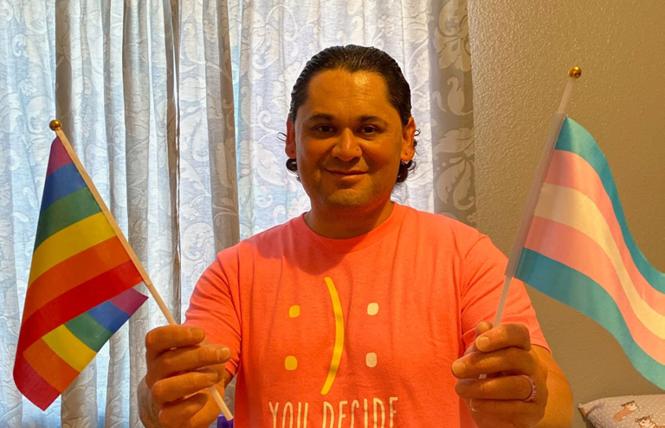 A trans asylum seeker who was released April 23 from U.S. Immigration and Customs Enforcement custody in Texas is back in California and told the Bay Area Reporter Friday afternoon that she's experiencing a range of feelings.

The San Francisco Public Defender's office, which is representing Lexis Hernandez Avilez, announced earlier Friday that she had been released after posting a $10,000 bond.

Avilez was suddenly moved to a facility in Texas from California on Christmas Day.

Avilez, 41, is now at home in Monterey County, where she participated in a phone interview with the B.A.R. last Friday. She flew from Texas to California that day.

"I'm happy, sad, all of the above right now," Avilez said. "I'm happy that I am Lexis Hernandez Avilez, I'm transgender and I'm not scared no more. I want to share my story with all the transgender women and transgender men; all the LGBT people."

Avilez's attorney, Deputy Public Defender Hector Vega, filed a habeas petition on April 8. A judge ruled that while Avilez had been convicted in a gang-related assault in 2005, there wasn't evidence to show this would be indicative of Avilez's future behavior upon release.

"The judge focused on the fact that it has been 15 years since her last criminal action," Vega told the B.A.R. last week. "The judge acknowledged everything that has changed since; she pointed to the completion of rehabilitative programs while in detention, and that her focus today is to stay well and healthy as she continues her gender confirmation treatment.

San Francisco Public Defender Mano Raju stated that he was "thrilled" that his office was able to secure Avilez's release.

"Transgender people who are incarcerated are often misgendered and detained in isolation or with the wrong gender population," Raju stated. "This is a massive issue in federal immigration detention, as well as in our prison system. My office will continue to fight to protect the rights of incarcerated transgender people and fight for their release; detention centers are not safe places due to the transphobia that continues to permeate these institutions.

"In this situation, Ms. Avilez had the double risk of worsening health services on the inside due to ICE's unwillingness to respect her identity, as well the risk she faced with respect to contracting the coronavirus," Raju added.

Avilez's release was not due to risks from the novel coronavirus, though Vega said that it was recently discovered that she has a condition that would make an adverse outcome more likely if she contracted COVID-19.

As the B.A.R. previously reported, an immigration judge ordered her release upon payment of the $10,000 bond.

Freedom for Immigrants, an Oakland-based nonprofit, paid the bond in conjunction with an online fundraiser and Avilez's family, according to the public defender's office.

"Freedom for Immigrants is proud to support Lexis in her release by helping to pay a $10,000 bond through our National Bond Fund," Christina Mansfield, the co-founder and co-executive director of Freedom for Immigrants, said in an April 24 release. "We believe no one should be imprisoned in abusive ICE jails and prisons. Lexis is a fierce advocate for not only herself, but for other transgender women incarcerated in our country's inhumane immigrant detention system."

The B.A.R. and other news organizations first reported on Avilez in January, after the surprise Christmas move from the Yuba County Jail (near Sacramento) to an ICE facility in Alvarado, Texas. Vega wasn't notified before the move.

Long journey
Avilez is originally from Mexico but has resided in California since 1979, according to court documents. She presented gender-nonconformity from a young age, for which she was reprimanded by her brother, Javier.

"I used to put on my mom's clothes, jewelry," Avilez said. "One day, when my brother turned 13, he realized what the word 'gay' was and he started calling me a faggot and asking why I loved all the feminine stuff. I said 'this is me' and he said 'no, it's not.'"

Avilez' brother choked and abused her, and while Avilez said he didn't "force" her to join a gang, he made it clear it was what he expected.

"He made me work out, get tough, started giving me medications," Avilez said. "I was scared and wanted to hide myself. But my brother knew; he said 'I know you, I'm not stupid. You're still hanging out with guys.' "

She got married in 2000 and became a permanent resident of the U.S. (Federal law allows the spouses of U.S. citizens to become permanent residents. After three years they can apply for U.S. citizenship.) Avilez said she got married so she could give her mother grandchildren, and that while she wasn't sexually attracted to her wife, she felt they were like best friends.

Avilez was 26 when she was convicted of a gang-related assault. Until then she had a job in the medical field, and April 24 was her first day out of custody since then.

"In prison and away from her brother's grip, Ms. Avilez immediately began the process of disavowing her gang ties," according to court documents. "For the first time, she began to explore and embrace her sexual attraction to men."

Avilez identified as a bisexual man, which Vega said was the result of a "lack of understanding and acceptance" of trans identities on the part of the wider culture. In 2019, Avilez began to openly identify as a transgender woman and started receiving treatment for depression. The same year her brother, Javier, died by suicide.

"I didn't know what I was: gay? Bisexual? It was confusing for me," Avilez said. "But when I got to jail, after dropping out of the gangs, I met a lot of gay people. I felt safer in jail.

"As time went by, I met a friend who was bisexual and with the help of my friend I told myself 'I'm transgender.' I never really knew but it came back — what I did when I was little. They said I looked like a little girl when I was little."

She had her name legally changed. By that time, she had been transferred to Yuba County and charged with being a permanent resident who was removable from the U.S.

While Yuba medical staff recommended hormone therapy, and ICE said the request had been approved, Avilez never received it, according to court documents.

Only after she was sent to Texas did ICE allow Avilez to commiserate with female inmates. Until about two months ago, the choice was either total isolation or male inmates, her attorney said.

After her move to Texas, Avilez had thoughts of suicide, according to court documents.

Freedom
Avilez said that the first thing she did after landing at a California airport was to buy a pink shirt and put it on.

"I saw people looking at me a little differently, and I didn't care," Avilez said.

"I've been in prison for 15 years and it's kind of hard to get justice. But I got to meet really good people. I'm alone in a room now, but I know I'm not alone. I have to take it one day at a time."

"Unlike in criminal court, non-citizens in immigration detention do not have the right to court-appointed counsel, and without the Immigration Unit, many would be forced to defend themselves against government trained prosecutors," the public defender's website states.