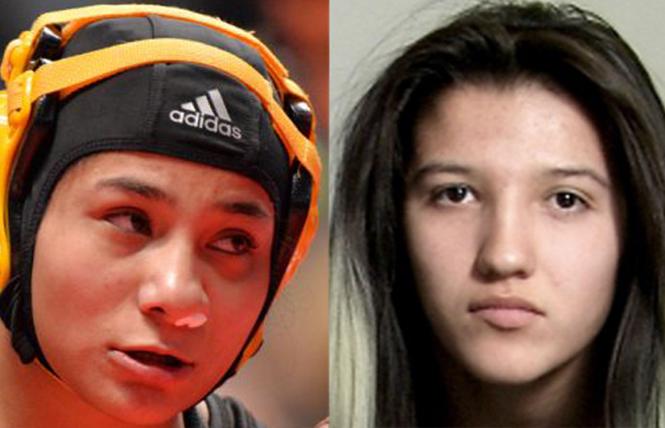 Less than a month ago, two Colorado high school girls earned medals in the state wrestling championships after a boy refused to wrestle either one of them. The way the national press handled the story should be an embarrassment for the entire journalism industry and a perverse hiccup in the march toward gender equality.

It was the first time two girls had placed in the state tournament, which both boys and girls wrestle in because the state does not yet hold a girls-only championship tournament. Angel Rios and Jaclyn Gallegos made their historic appearance on the medalist stand not because of those forfeits, but because of the matches they won.

But headlines did not focus on what those girls did in the face of adversity. They focused on the alleged nobility of Brendan Johnston, who refused to risk losing to them. Here's a sampling of how newspapers, broadcast stations, and websites saluted the girls' achievement in their headlines:

Washington Post: "Rather than wrestle a girl in the state championship, this high schooler forfeited." San Jose Mercury News: "A Colorado Springs wrestler made history when he knocked himself out of the state tournament rather than wrestle a girl." Atlanta Journal-Constitution: "Wrestler forfeits state tournament instead of wrestling girl." NPR: "Instead of Wrestling a Girl, High Schooler Chooses To Forfeit State Wrestling Match."

One columnist excused the male wrestler's decision not as prejudice, but rather as a "nuance" of thought. You know, much like the California Supreme Court declared marriage equality as a fundamental right but then said banning it through Proposition 8 was OK because it only "carved away" an itty bitty portion of our rights.

That kind of nuance.

The male wrestler said his "faith" prevented him from wrestling girls but he did not say, nor did reporters ask him, what aspect of his faith that was. He said he was not comfortable using physical force on the mat with girls but did not explain why he was comfortable using force in his sport against other boys.

Dude, it's wrestling. Get over it.

The boys' coach summed up his wrestler's alleged nobility by saying, "There are bigger things than state tournament wrestling." Said a state high school athletics administrator, "I think there's a bigger lesson there than wrestling."

Of course, they are both right. There are things bigger than the tournament that were at play here. Things like sexism. Prejudice. Denial of equal opportunity. Lack of respect for fellow athletes.

This tournament wasn't funded by the Church of Look But Don't Touch. The public high school wrestling programs weren't paid for by the church, either. Both were funded by tax dollars, and both were for boys and girls. The athletes are supposed to have learned respect for their sport and other athletes during the season, and then display those qualities at their best in the tournament.

The kid knew what he was signing up for. He just didn't hold up his end of the bargain with the taxpayers either during the season or at the end, and adults around him enabled his behavior — even praised it.

We're told that a good test to see if prejudice is at play is to replace the subject of the action with an African-American and see how much it stinks. This kid said he wasn't "comfortable" wrestling a girl. What would the reaction be if he told the coaches and administrators he wasn't comfortable wrestling a black kid?

Excusing sexism or any kind of discrimination on the mat is the kind of slippery slope an otter would love. Assuming male athletes in general have a physical advantage over their female counterparts, where do we draw the line to excuse boys from competing with girls when separate opportunities do not exist? Golf? Tennis? Basketball? Football? Rugby? Wherever you draw the line, you are denying an equal opportunity.

Look, the objective in wrestling is not to injure your opponent. It is to compete to see who has the skill set, discipline, conditioning, and mental toughness to outscore the opponent. That makes wrestling an ideal means to learn how to successfully tackle life's challenges and thrive.

That's what a boy refusing to wrestle a girl denies her. And what the national news media collectively failed to report.