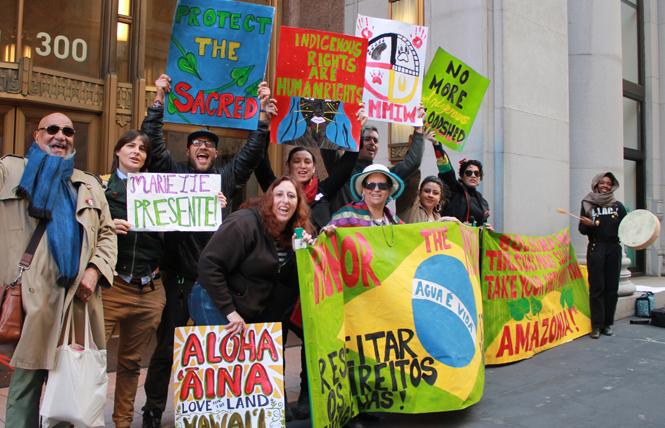 LGBTQI and indigenous activists continue to seek answers for the 2018 murder of bisexual Rio de Janeiro City Councilwoman Marielle Franco. They held a protest in San Francisco March 14 to mark the one-year anniversary of the killing.

"It has taken you how long to arrest the people who killed her?" asked María Xiomara Dorsey, 31, a two-spirit activist with Idle No More SF Bay and the Brasil Solidarity Network.

Mônica Benício, Franco's longtime partner, told the New York Times that the question of who ordered the killing "is the most important one."

The San Francisco protest resulted in police being called by a representative of 300 Montgomery Associates, which manages the building that houses the Brazilian Consulate. The management company complained that the protesters were blocking the fire exit and threatened to call the police, said Dorsey.

"The cops showed up," she told the Bay Area Reporter. "They said we are just here to make sure that you guys are safe and that everybody is being respected."

Dorsey was surprised, but encouraged, by the peaceful exchange between the police officers and the demonstrators.

It was a completely different scenario from Franco's experience combatting police brutality against Afro-Brazilians, indigenous and LGBT people, and women for whom she advocated.

"She was killed to intimidate people and to keep us quiet," said Dorsey. "That's not going to happen.

"I want to empower the community in remembering that we have strength and our fears can't drive us," she continued. "If we stay together, we remember the power that we have in numbers."

Representatives of the Brazilian Consulate didn't come down to speak with the estimated 30 demonstrators, which included Bay Area native and "L Word" star Daniela Sea. The group chanted, prayed, and sang, disrupting the hustle and bustle of San Francisco's Financial District.

Neither representatives of the building management company nor the Brazilian Consulate responded to the B.A.R.'s request for comment by press time.

Beloved
The protesters' goal was to raise awareness of Franco's assassination, demand justice, and honor her memory and work, said Dorsey.

"Mariella was this beloved woman, a human being who did so much work for her people," she said. "We are not forgetting her. We are uplifting her beauty as a person, as a mother, as a black woman, [and] as a queer woman."

The 38-year-old Afro-Brazilian feminist was a rising political star, but her life and the life of her driver, Anderson Gomes, were cut short on March 14, 2018 when Franco's car was sprayed with bullets in the heart of Rio. She was leaving an event where she was speaking to women about black empowerment, reported BET.

Both Gomes and Franco died instantly.

Her death caused international outcry as she was the only black woman on Rio's 51-member City Council and the only openly queer person.

Lessa, a retired military police officer, was detained at his luxury condominium in the Barra de Tijuca neighborhood that was once home to Bolsonaro before he took up residence in the capital earlier this year.

Queiroz, who was expelled from the military police and has been photographed with Bolsonaro in a friendly embrace, was also arrested, but it wasn't disclosed where he was taken into custody, reported the Times.

One of the suspect's daughters dated one of Bolsonaro's sons, according to the police.

The prosecutor's office believes that Lessa was the shooter while Queiroz was the driver of the vehicle used in the execution, reported the Rio Times.

Charging documents obtained by the paper allegedly showed that Franco's murder was planned for months and instigated by her work as a lawyer.

Authorities have issued 34 other warrants in the investigation.
Franco was raised in the Maré favela of Rio de Janeiro. In 2016, she was elected to the City Council representing the leftist Socialism and Liberty Party.

One of the people Franco inspired was Sea.

Sea was moved by Franco's life work and profoundly saddened by her assassination and felt the need to join demonstrators in San Francisco last Thursday.

"It hit close to home for me," said Sea, who has a personal connection to Brazil.

"No matter how many rights we attain for queer people it's always important to always remember my allegiance to, and my situation with, all marginalized and oppressed peoples," said Sea.

Recalling Carnival in Rio this year, memories of Franco was present during a festive protest that honored her, said Sea, who watched online. Some of the country's most popular samba schools waved a huge flag with Franco's face on it as they marched, sang about resistance and struggle, and danced through Rio.

"We can be really serious. We can be of consequence. We can put our bodies on the line and show up for the kind of world we want," said Sea.

In 1979, the Iranian Revolution encapsulated the overthrow of the monarch Mohammad Reza Shah Pahlavi by the Grand Ayatollah Ruhollah Khomeini. A leader of one of the revolutionary factions, Khomeini replaced Pahlavi's government with the Islamic Republic government.

Since the revolution and other events, such as Iran's public executions of gay men, along with economic and political crisis, an estimated 6-8 million Iranians have fled their homeland as refugees and asylum seekers in the diaspora around the world.

Tensions between the United States and Iran continue to make headlines. The conference will touch on these issues, but it will also focus on exploring the contributions of the Iranians in the Iranian diaspora.

Thought leaders of Iranian descent from a variety of fields, ranging from academia and researchers to artists and business, from seven countries representing more than 44 universities will discuss modern-day Iranians' experiences in the diaspora and their contributions to their communities and countries.

Two queer experts from Canada and the U.S. will speak at the conference.

Shadee Abdi, Ph.D., an assistant professor of interdisciplinary humanities and communication at Arizona State University, will speak about "Queer Iranian-American Women in the Diaspora: Transnational Narratives of Agency and Resistance."

Paniz Moayeri, a 27-year-old queer Canadian architecture graduate student at the University of Waterloo School of Architecture, will explore Iranian queerness during her discussion, "The Iranian Queer Community of Toronto and Public Space."

Iranians around the world are beginning to examine their place and the spaces they are claiming.

"I think that these conversations are kind of long overdue in the Iranian diaspora," Moayeri said, noting she's not the only one talking about the issue. "They are starting to happen."

Recalling a recent discussion with her father about a famous gay Iranian dancer's autobiography, Moayeri paraphrased him, "We come out of Iran or wherever we come from with baggage and suitcases of values and stories and, at some point, we need to sort through it because some of it is very, very valuable and some of it is garbage and you need to let go of it."

Exploring queer Iranians and the spaces they embody in Toronto is a new perspective and conversation.

"I think that the queer community has not been talked about as much and hasn't been a part of the larger conversation," said Moayeri, who is excited to present her thesis at the conference. "We need to begin to see all communities."

SFSU's distinguished chair at the Center for Iranian Diaspora Studies, Persis M. Karim, said including queer speakers at the conference was "a natural symptom of thinking about the kinds of communities, identities, and questions that are part of any community that has relocated in a new context."

"There are a lot of lesbian and gay people who have come to the West to seek asylum and build their lives here that might be perhaps not possible in Iran," the 56-year-old straight ally said. "There are important identities proliferating in new spaces like San Francisco Bay Area, Canada or Europe."

The center is the only one of its kind. It was founded by Bay Area philanthropist and SFSU graduate Neda Nobari in 2016, according to a February 15 news release announcing the conference. It's dedicated to interdisciplinary and transnational scholarship, research, and teaching about the Iranian diasporic experience. The goal is to foster new ways of understanding of the Iranian experience and present it through a critical examination of the past.

Nobari and her family were among the millions of Iranians displaced by the revolution. They resettled in the Bay Area four decades ago.

"To see this conference take shape, to see what a diverse set of speakers and scholars have to say about the experiences of Iranians around the globe, couldn't make me more pleased," said Nobari in the release. "We are so much more than the last forty years of negative news headlines!"

People in the Bay Area can also visit two art exhibits that are open and free to the public until March 31. For more information, visit http://cids.sfsu.edu/content/art-exhibits-iranian-diaspora-art.