Jock Talk: 'Light in the Water' is a must-see 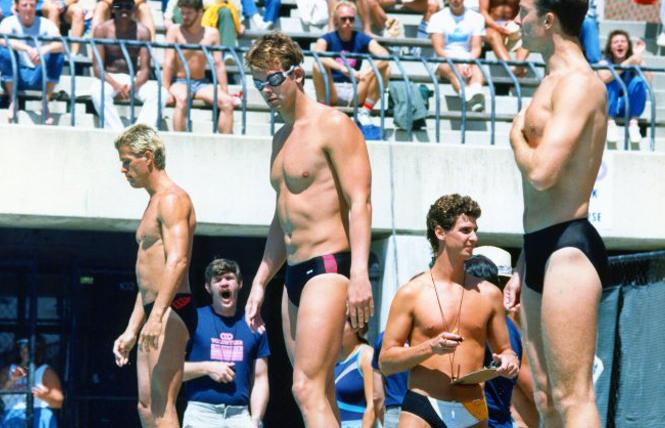 A scene from "Light in the Water." Photo: Courtesy Logo

Spoiled as we are these days with so many competition and participation options in so many different sports, from giant multi-sport festivals such as the Gay Games and Sin City Classic to annual international LGBT sports championships in soccer, tennis, and track to weekly games among local clubs — well, it is easy to forget how hard it was to get here.

Easy to forget the struggles pioneer gay sports groups had fighting their way on and into facilities. Or the discrimination they faced first because they were thought of as deviant dykes and effete fairies, or later because of the fear of AIDS. Easy to forget just how difficult it was to find isolated like-minded folks from across the globe at a time when instant, inexpensive communications and non-discrimination laws were non-existent.

And then a documentary such as "Light in the Water" comes along and we get a chance to remember. Remember and mourn and anguish and celebrate. We can embrace everything it took, from tragedies to quiet, unforeseen victories.

The film is a compelling documentary about West Hollywood Aquatics, whose formation in 1982 was inspired by the inaugural Gay Games in San Francisco; as well as the challenges, tragedies, and triumphs its members have experienced through the following decades. Previously it has been shown on Logo television as well as in several film festivals around the globe, including Paris, Sydney, and Palm Springs.

San Francisco-area residents will have multiple chances to see the documentary in the theater in upcoming weeks. If you haven't seen the movie yet, you definitely should.

The film will be shown at 1 p.m., Thursday, March 21, on the opening day of the University of San Francisco Human Rights Film Festival. Admission to the on-campus showing is free. For more information on the festival, email kaisers@usfca.edu.

The Federation of Gay Games and GLAAD have partnered to show the film as a benefit for the local LGBT swim club SF Tsunami Thursday, April 4, at 7:30 p.m. at the Kabuki Theater, 1881 Post Street, followed by a question and answer session with director Lis Bartlett, as well as original members of West Hollywood Aquatics, and original members of Tsunami Aquatics.

That screening has already sold out, so Doug Litwin, marketing officer for the FGG, said another screening has been added for 7:30 p.m., Tuesday, April 9, also at the Kabuki. Tickets are $14 with an added $2.50 service fee. It, too, will be followed by a discussion period.

"Whereas $2 from each ticket sold from the first show is benefiting Tsunami," Litwin said, "at the new April 9 show, the Federation of Gay Games will be the beneficiary."

Lesbian sports administrator fired in admissions scandal
The University of Southern California fired lesbian Donna Heinel from her job as senior associate athletic director after she and dozens of other individuals were indicted last week on federal charges connected with allegations that wealthy parents were bribing coaches and administrators at numerous universities — including the likes of Stanford, UCLA, and Yale — to let their children into the schools without normal admissions screening.

Stanford students Kalea Woods and Erica Olsen have filed a federal lawsuit against the involved universities, Singer, and Key Worldwide, asking for class action status and seeking the return of application fees and punitive damages. Olsen dropped out of the lawsuit last week, but in an amended complaint, several other students signed on.