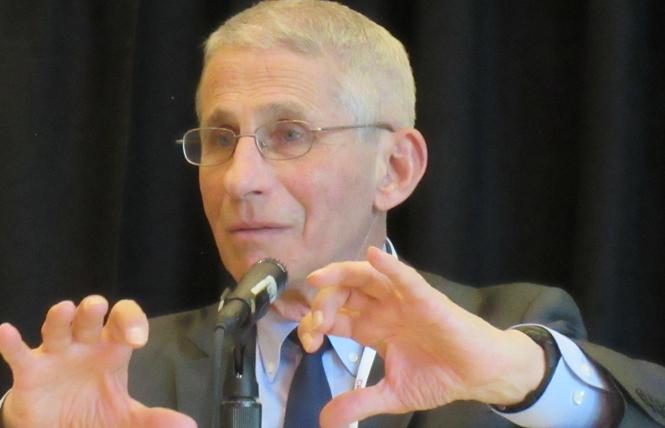 Dr. Anthony Fauci of the National Institute of Allergy and Infectious Diseases fleshed out a proposed national HIV plan at the opening session of the Conference on Retroviruses and Opportunistic Infections this week in Seattle. San Francisco's progress in curbing new infections was cited as a model for other areas.

"We have the tools to end the epidemic and we've known this for some time," Fauci said at a CROI press briefing. "The fundamental scientific basis for the plan is treatment as prevention and PrEP."

In his State of the Union address February 5, President Donald Trump put forth a proposal to end the HIV epidemic in the United States. An editorial by Fauci, Centers for Disease Control and Prevention director Dr. Robert Redfield, George Sigounas of the Health Resources and Services Administration, and others was rushed into print in the Journal of the American Medical Association, laying out a foundation for the plan, which aims to reduce new infections by 75 percent within five years and by 90 percent within 10 years. CROI organizers likewise rushed to add Fauci's special presentation to the program.

Fauci emphasized that there is now unequivocal evidence that HIV-positive people who take antiretroviral therapy and have an undetectable viral load do not transmit the virus, giving rise to the "undetectable equals untransmittable" message. What's more, HIV-negative people who take Truvada (tenofovir DF/emtricitabine) every day — or a new 2-1-1- "on demand" schedule before and after sex — are almost completely protected against infection.

San Francisco, with its pioneering recommendation of early antiretroviral therapy for everyone with HIV, its rapid ART program to start newly diagnosed people on treatment immediately, and its extensive roll-out of PrEP, offers a model for reducing new infections, Fauci said.

The latest HIV San Francisco epidemiology report shows that the number of new HIV diagnoses continues to decline, falling to 221 cases in 2017 — the lowest number since the start of the epidemic. This represents a 5 percent decline from 2016, following two years of steeper drops of around 15 percent. But not all groups are benefitting equally, with young African-American and Latino gay men and homeless people having persistently higher infection rates.

"Theoretically, if we put everyone who has HIV on antiretroviral therapy and provide PrEP for all those at high risk for HIV, we could end the epidemic now," Fauci said. "This plan is trying to make the theoretical real."

HIV decline stalls
To end the epidemic nationwide, however, widespread testing, rapid treatment, and PrEP will need to be rolled out in areas with the highest numbers of new infections. Just 48 counties plus D.C. and San Juan, Puerto Rico — out of more than 3,000 total counties nationwide — account for more than 50 percent of all new infections, Fauci said. In addition, seven mostly Southern states have high HIV incidence in rural areas.

The administration's plan comes at a time when the national decrease in new infections has stalled, according to a CDC report released last week. The most recent data on HIV trends from 2010 through 2016 show that after about five years of substantial declines, the number of new HIV infections began to level off in 2013 at around 39,000 per year.

"Now is the time for our nation to take bold action," CDC director Redfield said in a press statement. "We strongly support President Trump's plan to end the HIV epidemic in America."

Not shuffling funds
Trump's announcement was greeted with skepticism by many advocates, given the administration's perceived hostility to gay and especially transgender people, and Republicans' ongoing attempts to dismantle the Affordable Care Act, which has extended coverage to many people living with HIV. Some predict that the plan will not be backed by adequate resources.

Although he was unable to discuss a budget in detail, Fauci assured CROI attendees that the plan will not shuffle money away from existing domestic and international AIDS efforts.

"This has nothing to do with moving any resources away from what we already do all the time," including HIV vaccine research and global initiatives through PEPFAR, he said. "It is feasible to end the epidemic in the U.S., but that's not taking away from the importance of the rest of world."

Instead, Fauci expects the CDC and HRSA, which administers the Ryan White program, to receive new funding. He was short on specifics, however, noting that he hopes Trump will present a budget proposal "within the next couple weeks."

Fauci addressed reservations about the plan from those worried about the administration's treatment of vulnerable populations who bear a disproportionate burden of the HIV epidemic.

"The people who are going to be administering the program are not political people," he said. "We need to separate the [administration's] perceived attitude from the people doing the work. There is no issue with the LGBT community or with trans people as far as I'm concerned or anyone at the CDC is concerned."