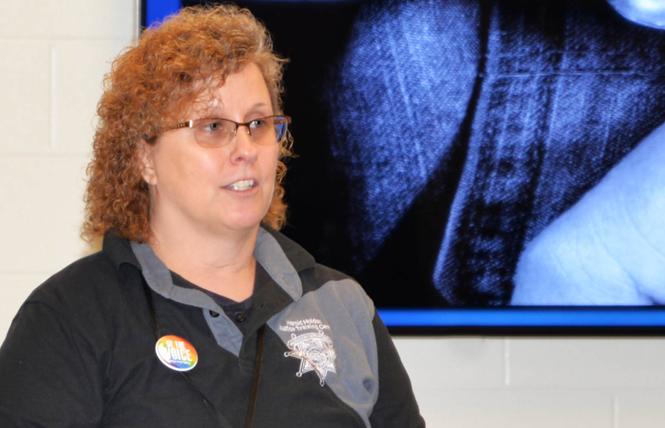 Anne Elwart, manager of the adult division at the Santa Clara County Probation Department, led a training session on LGBT sensitivity for trainers in the South Bay earlier this month. Photo: Jo-Lynn Otto

Seven students stood in a circle. Each held a different colored five-point star with their name on it.

Inside of the classroom — which was tucked away at the back of beige government buildings on a ranch surrounded by chain link fencing behind suburban neighborhoods and a shopping center in Morgan Hill — rainbow flags brightened the atmosphere. Books about the LGBT community and its history, stickers, and handouts listing community resources lined the wall against the window.

Leading the exercise was Anne Elwart, 48, the instructor for the class titled, "Ensuring Fairness & Respect for the LGBTQI Community in the Justice System."

Elwart is a gay woman who is the probation division manager of the adult division at the Santa Clara County Probation Department. She developed the class with a colleague.

Throughout the years teaching trainers in other California jurisdictions and other states, the February 13 course was the first time Elwart had trained the trainers in her own county's probation department.

Elwart and nine registered volunteers have together trained 75 trainers and more than 2,000 law enforcement employees.

The first exercise of the day was one of many immersive experiences Elwart uses to help students understand what it is like to be LGBT.

At the end of the course, the trainers will have gone from becoming familiar with the material to watching each other teach the course to becoming teachers themselves, ready to impart their knowledge to others.

"By the time they are done doing the trainer course they have seen the curriculum taught at least four times before they start teaching on their own," said Elwart.

The trainers won't be alone during their first couple of classes. Elwart will be with them to help them along, she said. It's a part of the trainers' ongoing instruction before being completely on their own.

"We really want to set up the trainers for success," said Elwart. "We really give them a lot of support."

Her students were inquisitive and engaged during the class observed by the Bay Area Reporter.

Marc Moran, a deputy probation officer, and Patricia Martinez, a senior group counselor at the probation department, were two of the students.

Moran, a 36-year-old straight ally, and Martinez, a 45-year-old lesbian, both believed the training would improve their work with the LGBT community.

"We deal with people who have made poor choices," said Moran, who has been with the department for 11 years, working with both adults and youth.

He noted that people from every background, including gender identity and sexual orientation, come through the system.

"It does not matter, people make poor decisions and probation is going to have to offer them services just like they would anyone else," he said.

Martinez has been with the department, working with youth, for 20 years.

"It's important that as staff [we] have the knowledge and the resources so that we can help, whether it's our youth or adults that come into the system," she said.

Elwart was impressed by the trainers during the session.

"The passion that they have because they want to make a difference," said Elwart. "I just couldn't be happier."

Creating the course
Elwart was part of a five-member team that created the Respectful Communication with LGBTQI Youth curriculum for the National Institute of Corrections. The 90-minute online course was created for federal justice department employees to comply with the Prisoner Rape Elimination Act, which was implemented in 2013, after a 10-year preparation period.

Laura Garnette, 54, a lesbian who is the chief probation officer for the county, wrote in an email that the course is "vitally important."

"We are charged with the care of other people's children and helping people rehabilitate. We have a responsibility to try to help them, and, at a minimum, not to harm them," Garnette wrote. "This training is all about how to help instead of harm LGBTQ people.

"It is about so much more than just sensitivity to LGBTQ clients," she continued.

Garnette credited Mike Simms, a straight ally who was unable to co-teach the recent class, and Elwart with demystifying LGBT issues, humanizing the community, and helping the department's staff understand the best practices for working with the LGBTQ community and legal responsibilities.

"We want people to make better choices and to live law-abiding lives. We have to understand the person fully for that to work," Garnette wrote.

During the past six years, Simms and Elwart have taken the training to a new level with the department's support. They refined the training materials, seeking out experts to educate them about segments of the community outside of their own purview.

Elwart acknowledged that, while she is a member of the LGBT community, she still had a lot to learn about it.

"We really didn't do a great job in the beginning teaching the transgender, gender-nonconforming, the nonbinary" piece of the course, she said.

"We had a hard time wrapping our heads around it," she added. That was until she found Gender Spectrum, a gender education organization. Elwart and Simms attended one of its conferences and incorporated what they learned into their training materials.

They also tapped into other resources.

"We are constantly learning," said Elwart, who described herself as an advocate, particularly for LGBT youth and suicide prevention. "It's always changing and there are always new things."

Additionally, Elwart is appreciative of the department's thoughtfulness and approach to the LGBT community and its support for the course.

She also praised gay former Santa Clara County supervisor Ken Yeager and the county's Office of LGBTQ Affairs for the work it has done rolling out the training to other county departments.

While it is not known how many LGBT people are in the justice and probation systems, the trainings are a step toward being able to start collecting the data, Elwart said.

"I found out in the beginning of doing this that a lot of people just did not realize that the suicide rate was so high," she said. "A lot of people, in doing this training, truly think that it's a choice to be gay or transgender."

Over the years, she's witnessed a huge shift in understanding the LGBT community, particularly transgender people, within the department. In 2011, when the probation department was faced with its first known transgender woman, the staff was unprepared.

Fast forward to 2018, when the department received its first known transgender man — it was a world of difference.

"People were having conversations just like it was just any other male," said Elwart. "To see that shift in the staff was awesome."

"I don't think that the county ... before we started doing this training, would have even thought of that, now that's actually in our writing," she said, adding that the trainings are also positively affecting LGBT employees throughout the department.

Next generation
Now, she is training the next generation of trainers from various divisions of the department who will take her place.

Like for Elwart and Simms, the training is voluntary and is in addition to staff's daily responsibilities.

Elwart is optimistic about the future and building the bridge between law enforcement and the LGBT community.

"I am very hopeful," said Elwart, who talked about Assembly Bill 2504 that went into effect January 1.

The Peace Officer Training: Sexual Orientation and Gender Identity law requires the Commission on Peace Officer Standards and Training to develop course work on sexual orientation and gender identity to be taught at police academies statewide. The bill was authored by gay Assemblyman Evan Low (D-Campbell) and signed by former Governor Jerry Brown in 2018.

"I was, like, ecstatic," said Elwart about the new law.

She and her colleagues immediately began working on gathering experts and creating the curriculum.

"The fact that it is going to be taught in the academy — how to work with the population — gives me lots of hope," she said.

She also talked about Ohio, where she has trained multiple law enforcement departments.

"Ohio is one of our states that does not have any hate crime laws to protect the LGBT community," she said. "When I had a state jurisdiction in a state that does not have a law to protect [LGBT people] that wants to do a better job, that's why I went," said Elwart. "That's why I have hope, because even when the state legislatures can't get it together and pass the bill the administration of probation said we can do better."