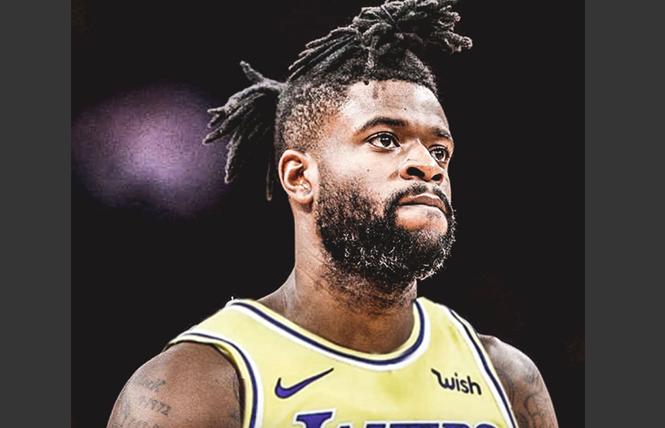 So, when the NBA All-Star Game was played last weekend, LeBron James had picked his favorite soon-to-be free agents to populate his squad with the not-so subtle suggestion that he would love them to come to Los Angeles after the season to join him on the Lakers and that paid off big time when Warriors forward Kevin Durant won the game's Most Valuable Player Award when James' squad rallied for a comeback win, and Steph Curry delighted his home crowd with a sky-high bounce pass to Milwaukee's Giannis Antetokounmpo for a delightful dunk and, can we forget about all of that for a moment and talk about the game being played in North Carolina?

If y'all recall, the game had been scheduled to be played in Charlotte two years ago. At the time, the state Legislature was considering a law called HB 2, or the "Bathroom Bill," a statewide law that banned local LGBT anti-discrimination ordinances and required transgender individuals to use restrooms associated with the gender listed on their birth certificates. Rick Welts, a gay man who's an executive with the Golden State Warriors, had delivered an impassioned speech at the 2016 NBA owners meeting and said he would not attend the game there if the law passed.

The law passed. The NBA pulled the game (the NCAA also pulled several tournaments from the state and several companies dropped expansion plans). Subsequently, the Legislature adopted a new law, HB 142, which dropped the blanket prohibition of public restroom use by transgender individuals — but moved control of public restroom policy to the hands of the Legislature — and continued the ban on local non-discrimination laws until 2020.

At the time, Simone Bell, a regional director with Lambda Legal Defense and Education Fund, said, "Lawmakers replaced a bad bill with another bad bill. This fake repeal is an attempt to silence LGBT people. It is shameful to stamp a start date on equality. We demand a full, clean repeal, and that includes comprehensive non-discrimination protections."

The NBA? It decided the bill was good enough to claim victory and awarded the 2019 All-Star Game to Charlotte.

"I'm sympathetic to those who feel that there are still not appropriate protections for the LGBTQ community," NBA Commissioner Adam Silver said. "But I also felt from a league standpoint it was important, and as part of our core values, to work with people and, ultimately, to move forward with the community."

As for Welts, the executive whose marketing savvy built the All-Star weekend into the financial bonanza it is? He declined comment and kept a low profile, but apparently went to Charlotte after extensive meetings with other NBA leaders. Comedian Dave Chappelle used the weekend as an opportunity to put on two sold-out performances loaded with jokes about transgender folks. Gay former NBA player Jason Collins was in town representing NBA Cares. Los Angeles Lakers guard Reggie Bullock, whose transgender sister, Mia, had been stabbed to death in 2014, met with two-dozen LGBT youth and allies.

"It was good for me to be able to be here with them and talk to them and hear their stories," Bullock, 27, told the Los Angeles Times. "They weren't holding back on anything. It opened up my eyes to what they have to go through on a daily basis, because when you randomly walk past someone, you never know what they're going through. I'm trying to educate myself every day as a straight man on this community that I stand up for and support."

So, bottom line: was the All-Star Game's return to North Carolina a compromise or a capitulation?

Neither. It was another imperfect step in a timeless struggle between ignorance and enlightenment, prejudice and acceptance, fear and compassion. It's too soon to give it a final score or declare victory.

FGG annual meeting set
The Federation of Gay Games will hold its annual membership meeting and officer elections October 31-November 2 in Guadalajara, Jalisco, Mexico. Guadalajara had been a finalist in the bidding to host the 2022 quadrennial Gay Games, which ultimately were awarded to Hong Kong.

Elections are scheduled to be held for 12 two-year seats on the board of directors: female co-president; vice presidents of operations and member services; officers of marketing, diversity and inclusion, ceremonies, human resources, sports (male), international development, site selection, and development; and an officer-at-large. The membership will also receive annual reports and updates from the 2022 Gay Games host organization.

All proposed motions and bylaw changes must be submitted to ADA2019@gaygames.net by July 31 and will be presented by the board to the membership by August 31.

Registration information is available at http://www.gaygames.org/event-3265456.