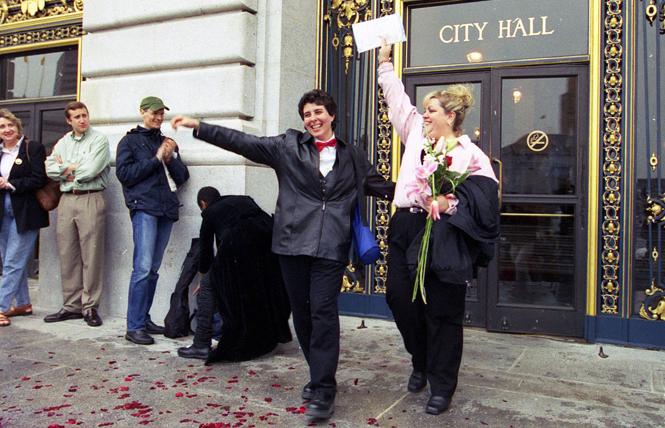 It was 15 years ago this week that then-San Francisco mayor Gavin Newsom ushered in a bold stand for same-sex couples when he ordered city officials to issue them marriage licenses.

The surprising thing was that the marriages continued for about a month, as the courts refused to halt them despite opponents' arguments that they violated state and federal law at the time. That was due to sharp legal work by City Attorney Dennis Herrera and his team, including his former chief deputy Therese Stewart, a lesbian who is now a justice on the state Court of Appeal.

Newsom's action was also unpopular among some political leaders. Most notably, Senator Dianne Feinstein (D-California), who called it "too much, too fast, too soon."

By the time marriages did end on March 11, approximately 4,000 couples had tied the knot in a show of civil disobedience. The marriages were later invalidated by the state Supreme Court, but Newsom's action on February 12, 2004 began the long march to legalized same-sex marriage, which was restored in California in 2013, and the rest of the nation two years later. (There was a brief window of time between May and November 2008 when same-sex couples could legally wed in the Golden State before the passage of Proposition 8.)

For those 30 days, lines snaked around City Hall as same-sex couples came from near and far to get hitched. It became known as the "Winter of Love."

Newsom, now California's governor, mentioned the Winter of Love in his first State of the State address Tuesday, when he said that President Donald Trump's "border emergency" was a "manufactured crisis."

"For me, this is an echo from 15 years ago," Newsom said. "I was a new mayor sitting in the gallery at the State of the Union when President Bush said LGBT Americans should not be able to get married.

"It was an attack on our friends and neighbors, and on California's values," the governor added.

Bush's speech was what prompted Newsom to issue the order to city officials to marry same-sex couples.

"I was so proud to watch brave Californians answer those attacks with love and courage. Phyllis Lyon and Del Martin made history when they were married 15 years ago to this very day," he said. "Now, just like back then, we must stand up for those maligned, marginalized, and scapegoated."

Later this month, the GLBT Historical Society will hold a panel discussion, "Love, Marriage, and Queers: 15 Years of Bliss?" It will explore progress of the LGBTQ community since that month of nuptials.

The panel is part of the society's monthly "Fighting Back" series that takes on contemporary queer issues in a historical context. This month's community panel will look back at the history and outcomes of the marriage equality movement in San Francisco and nationally.

Julie Nice, the Herbst Foundation professor of law at University of San Francisco School of Law who identifies as lesbian, will moderate the event.

"After I was banished from my family and hometown when I came out over 40 years ago, I could not have imagined we'd have same-sex marriage in my lifetime," Nice told the Bay Area Reporter. "I do hope the Fighting Back event will provide an open forum for the community to reflect on, celebrate, and possibly critique the marriage victory."

Nice said she hopes that participants in the forum will consider next steps toward addressing the ongoing backlash and persistent resistance to LGBTQ equality and also the alarming rates of economic insecurity among huge swaths of the LGBTQ community.

"It's been a long journey for me," Nice said. "I'm just so proud of the progress that the LGBT community has made. I'm very cognizant of work we still have to do, especially with those who are most economically marginalized.

"The thing I find really fascinating to look back on," she added, "is those marriages were so high profile and so poignant and moving. To have all those images of same-sex, beautiful couples surrounded by friends and family, that's really key. It brought the human story to public awareness."

Also participating in the discussion will be John Lewis and Stuart Gaffney, who met in 1987 and were one of the first 10 couples to be married at City Hall on February 12, 2004.

Now celebrating nearly 32 years together, Gaffney told the B.A.R., "It's an exciting opportunity to revisit the magical moment that is now forever known as the Winter of Love and the magic that we experienced."

He called getting married that day an absolute life changing experience.

"On a personal level, it changed our lives certainly," Gaffney said. "On a political level, we felt for the first time that our government was treating us as equal and our relationship was being given respect of the law just like everybody else." 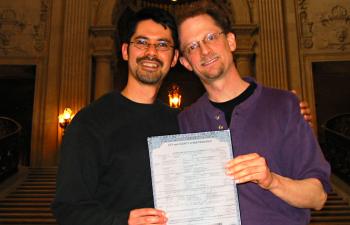 Marriage history
At the time of the Winter of Love, Lewis and Gaffney had been together for 17 years. And on that February day the couple showed up for a Marriage Equality California rally on the steps of City Hall having no idea at that very hour San Francisco would begin marrying LGBT couples. The late Del Martin and her spouse, Phyllis Lyon, were the first to be married.

Six months after San Francisco married thousands of queer couples, California's state Supreme Court ruled that the city had overstepped its legal authority and declared all the same-sex marriages null and void on August 12, 2004.

Then, in May 2008, the California Supreme Court ruled that same-sex couples could not be denied the right to marry, and the following month, same-sex marriage became legal again in California. Lewis and Gaffney married once more, as did many other couples, including Martin and Lyon.

When Prop 8, a measure banning same-sex marriage, passed in the November 2008 election, once again blocking Golden State same-sex couples' access to marriage, Lewis and Gaffney joined many other LGBTQ people in the community to fight for their rights through Marriage Equality USA. To this day, their advocacy work continues worldwide.

Following a trial in federal court, Judge Vaughn Walker ruled in August 2010 that Prop 8 was unconstitutional. (Walker was outed as gay after the trial but before he released his opinion.) The matter was later taken up by the U.S. Supreme Court, which in June 2013 tossed out Prop 8 on a technicality. Same-sex weddings resumed in California, this time for good.

Gaffney believes many wonderful things emerged from the marriage equality movement, including a ban on conversion therapy, which he called "an outgrowth of the Prop 8 trial."

Fifteen years later, the longtime couple hopes attendees at the "Love, Marriage, and Queers" event will come out for the evening to relive or get a taste of the Winter of Love magic.

"Fighting Back: Love, Marriage, and Queers: 15 Years of Bliss?" takes place Thursday, February 28, from 7 to 9 p.m. at the GLBT Historical Society Museum, 4127 18th Street in the Castro. Admission is free for members and $5 for non-members. For more information, visit http://www.glbthistory.org.