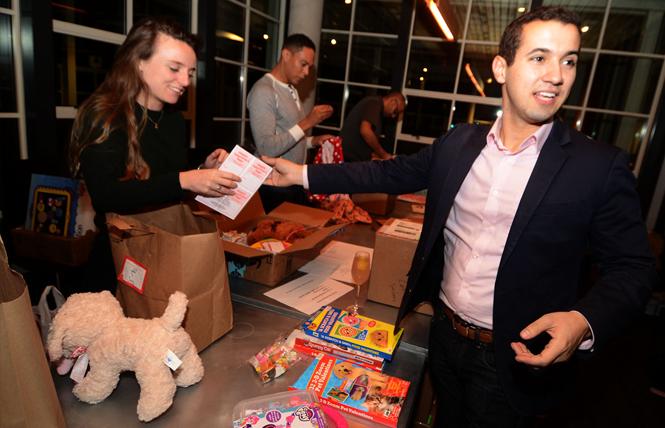 A unique project likely will bring smiles to the faces of ill children on Valentine's Day.

The Valentine Project, a 501(c)3 nonprofit, provides gifts to children suffering from cancer or other chronic illness. A couple of weeks ago, it held the first of several "packing parties" at Sessions, a restaurant in the Presidio. Around 20 volunteers packed and addressed boxes filled with gifts that were being sent to children across the Bay Area for Valentine's Day. The atmosphere at the packing party was festive and upbeat.

The Valentine Project was co-founded by gay San Francisco resident Greg Margida, 25, who started it in his hometown of Alliance, Ohio, where, when he was younger, he had a friend who was battling cancer. Margida saw how this affected the girl's family, and it showed him that there was a lot of room for him to do something nice for other kids who were going through the same thing.

As the project began, Margida enlisted the aid of his classmates, and they made gift boxes for about 80 kids. The project caught on. Other parents began signing their kids up, and more people enlisted as volunteers. The operation still exists in Ohio, where around 900 kids are served each year, Margida said.

The Valentine Project expanded to the Bay Area last year when Margida moved to San Francisco. It now serves about 100 children in the Bay Area.

"We're about spreading joy, love, and hope to children who have cancer or chronic illness or who have a sibling who has cancer or chronic illness," Margida said. "The main thing we do is that on Valentine's Day, we send a one-of-a-kind gift box, made by a volunteer. They go online and sign up to sponsor a child, and then they make a specialized box just for that kid."

Margida said that gifts were chosen in part from suggestions made on the website. Volunteers can also add a little flavor of what they like. Margida's boyfriend, Raul Del Barco, who works at the Academy of Sciences, included an Academy of Sciences hat in the box he put together for his child. Other gifts included teddy bears and dolls.

"It's less about what's actually being given to the child and more about showing love and joy and a random act of kindness for that child," Margida said.

Margida added that the project was expanding operations beyond Valentine's Day.

"We are a year-round organization," said Margida. "It started out just on Valentine's Day, but now we send cards year-round to kids, not for any special occasions, but just to be nice. That's what our organization is about, to let the kids know that someone is thinking of them, that someone wanted to do something nice for them. These kids deal with so many unexpected negative things in their lives, and we feel that they deserve some unexpected positive things as well."

The annual budget for the Valentine Project's Bay Area operation is $3,000, which Margida said is used to cover the cost of shipping the gift boxes. The funding, and the gifts, are all donated. He noted that the volunteers were found through grassroots efforts.

"We started out in Ohio with family and friends," Margida said. "Then it spread to their family and friends, and now I'll see on our social media my mom with kids I've never seen before, running around and packaging things up at our house. And the same thing happened here. I started with people I knew, and the word started to spread. Social media helps out a bit as well. We've grown our own family here."

The Valentine Project does not have a physical location, Margida said. Sessions volunteered its space for the packing party, going so far as to receive and store packages for the project. Evin Gelleri, general manager of Sessions, spoke of why the restaurant got involved.

"When Greg explained what they were doing with everyone bringing gifts to wrap for the needy I thought it was a great community outreach," he said. "We have such a large space so I thought it would be a great place for the group to come and do this project. I'm hoping it's a big success for Greg. He has a lot of passion for a great cause."

Volunteers were also excited about the project.

Sukanya Kalia, 36, spoke of why she was participating.

"I've always had a passion for health care," she said. "I feel like, besides having a baby there are very few enjoyable health care experiences. I wanted to be part of a community that brings joy to children and their loved ones."

"It's the ability to make a difference in a child's life," added Del Barco, 56.

Gilroy resident Liz Torres told the Bay Area Reporter that the gifts mean a lot to her and her daughter Sophia, who lives with brain cancer.

"It brings her joy and happiness knowing that she has a volunteer gift from someone," said Torres. "I'm very happy with the Valentine Project because of what they're doing for kids like my daughter. I'm very happy that there are people like Greg and his friends. I hope they keep doing this so they can bring joy to kids fighting cancer and other illnesses."