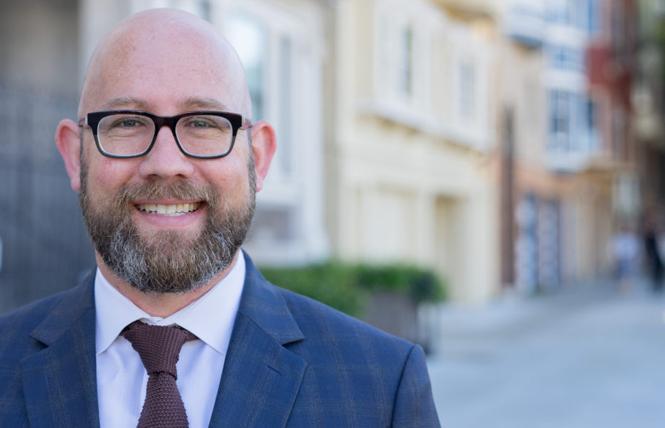 Gay District 8 Supervisor Rafael Mandelman is calling for a hearing on how San Francisco city agencies are working to improve their collection of sexual orientation and gender identity demographic information.

The Board of Supervisors' government audit and oversight committee is expected to schedule the hearing sometime in March ahead of when budget negotiations begin to heat up in April. Mandelman, the lone LGBT community member on the board, specifically is asking the city agencies to provide mid-year reports on their SOGI data collection efforts during the current 2018-2019 fiscal year.

"This is an opportunity to understand how our city is or is not serving LGBT folks," Mandelman told the Bay Area Reporter when asked why he felt the hearing was needed. "We have some of the data; we also have plans on how to get more of the data. This is an opportunity for city departments to help us understand where they are in the process and for members of the LGBT community to express their needs and also to provide feedback."

Contractors that receive more than $50,000 a year in city funds are also required to collect SOGI data. LGBT advocates contend that, without such information, city policymakers and officials are blind to the health issues and other concerns confronting the LGBT community.

"I think in almost all cases it was clear they were works in progress, which is why we want to see the data for the first half of 2018-2019," Mandelman said of the SOGI data reports released by the city agencies last year. "In some cases there wasn't any data really."

His aim, said Mandelman, is to work with the mayor's Office of Transgender Initiatives and the city agencies in reviewing each department's SOGI compliance plan to see what steps they are taking to ensure their LGBTQ clients are receiving the services they need.

"We get it that this is a new obligation, and they are working their way through it," said Mandelman. "We do want to make sure they are making progress and are collecting the data they are supposed to collect."

Clair Farley, director of the city's Office of Transgender Initiatives, has been working with the departments on how to best collect the SOGI data. As she told the B.A.R. in October, "There has been a lot of work on the backend across departments to try to push this forward despite the challenges."