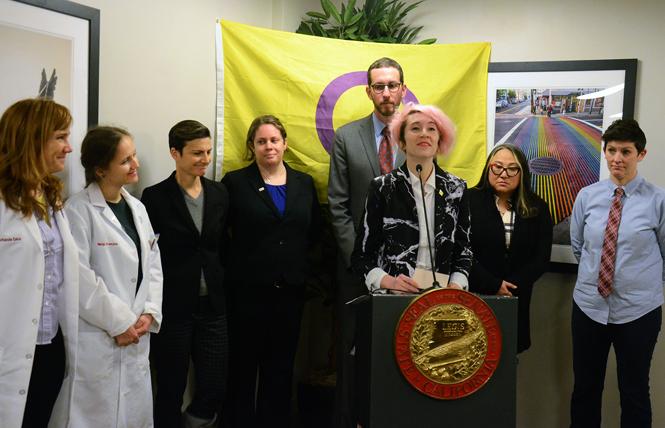 At a news conference in San Francisco Monday morning, Wiener announced his Senate Bill 201, which is being referred to as the Intersex Bodily Autonomy bill.

"It will ensure physicians in California move away from performing medically unnecessary surgeries on babies who are born as intersex," said Wiener, chair of the Legislative LGBT Caucus. "Instead, it will allow people to make decisions for themselves when they are able to do so to have intersex surgeries."

According to a summary of the bill, which the Bay Area Reporter first reported on in an online story Monday, it would ensure that intersex minors are able to give informed consent before any medical treatments or interventions are performed on their sex characteristics, excluding cases of medical necessity.

"This important measure will ensure that intersex individuals will not have important choices about sex and gender identity made for them in infancy by parents and doctors, but will rather be able to make those important and life-altering decisions themselves," states the bill.

"We are not talking about anything that is medically necessary," explained Hans Lindahl, who is intersex and the director of communications and outreach for InterACT Advocates for Intersex Youth, stressing that those supporting the legislation "are not anti-surgery; we are pro-consent."

Because such a bill is expected to face fierce resistance from medical professionals and conservative groups, lesbian Senate President Pro Tempore Toni Atkins (D-San Diego) had advised Wiener last year to take a go-it-slow approach to the issue. As he recounted to the B.A.R., Atkins suggested he first introduce the nonbinding resolution as a way to educate lawmakers and the public about the topic.

Anthony York, a spokesman for the California Medical Association, told the B.A.R. that the group is reviewing this year's legislation and plans to take a formal position on it prior to it being heard in committee.

In a statement, CMA Senior Vice President for Governmental Relations Janus Norman said the organization has "some very serious concerns" about the proposed bill, from its medical implications to how it defines "informed consent" and other legal issues.

"In these cases, the current guidelines call for a multi-disciplinary care team to be convened to understand the particulars of each individual case, with an eye toward the physical and emotional health and future of the child. The details in these cases can vary greatly, and no two individual circumstances are exactly alike," stated Norman. "Our concern is that the approach in this bill may be overly prescriptive and not give families and medical professionals the ability to take the specifics of each case into account."

The Societies of Pediatric Urology has already come out against the bill, calling it "anti-choice, anti-parental rights and anti-science."

It issued a statement calling the legislation "a broad overreach which serves to abrogate parental rights and limit a child's access to medical care."

The bill it contends is "predicated on outdated, false information and intentionally circumvents current scientific medical research. Moreover, the inclusion of diagnoses where issues with gender identity is no greater, or marginally greater, than the general population only serves to conflate and confuse the issues that apply to a very small number of children around the country."

The group added, "The leading medical research on the subject is clear; the overwhelming majority of affected babies will grow up never questioning their gender regardless of the appearance of their genitals."

Those opposed to the practices point out that the medical intervention can result in extreme scarring, chronic pain, incontinence, loss of sexual sensation, post-traumatic stress disorder, and incorrect gender assignment.

"Being intersex is not something to be fixed," said McKenzie Eakin, a medical student at Stanford Medical School.

interACT is thrilled to announce our co-sponsorship of California's #SB201. By passing this bill, CA would affirm that cosmetic procedures permanently affecting fertility, puberty, and sexual function must be delayed for an individual's informed consent. #DelayIsOkay pic.twitter.com/STIO2WIHXQ— interACT (@interACT_adv) February 4, 2019

The San Francisco Human Rights Commission over a decade ago had published a report that called for an end to performing intersex surgeries on infants. Having served on the oversight body at the time, transgender advocate Cecilia Chung praised Wiener for introducing the legislative ban.

"I am really glad this is finally turning into a piece of legislation today by Senator Wiener in California," said Chung, who now serves on the city's health commission and works on policy issues at the Transgender Law Center.

If adopted, the legislation would impact hospitals like UCSF Benioff Children's Hospital. As it states under the "treatment" tab on its "Disorders of Sex Development" webpage, which has been updated since state lawmakers adopted Wiener's resolution last year, the treatments it performs varies depending on each child's diagnosis.

"Some children need surgery to prevent medical problems while others do not. Some children require life-long hormone or electrolyte supplements," states the website. "Gender is not assigned by the medical team but by the individual. The team's role is to support the child and family."