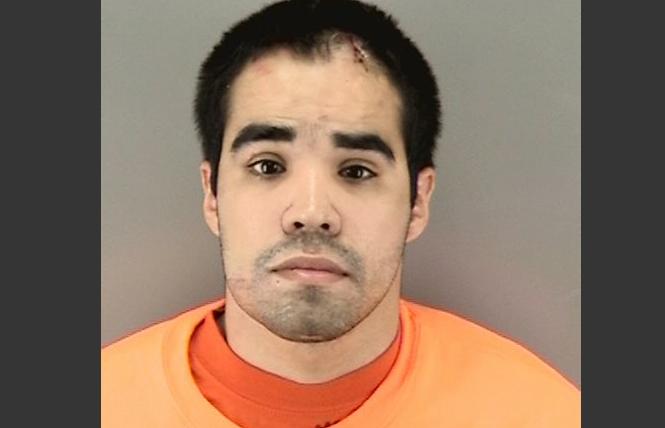 A preliminary hearing started this week for convicted arsonist David Munoz Diaz, who is facing charges of attempted murder and assault with a deadly weapon after he was allegedly caught on video lighting a homeless person on fire.

The hearing concluded Wednesday, August 29, and Diaz was held over for trial, according to a spokesman for the district attorney's office.

Diaz, 28, was arrested March 8 for the incident that occurred February 19 near Folsom and Sixth streets. Diaz has pleaded not guilty to the charges and remains in custody. Deputy Public Defender Scott Grant is representing him.

At the preliminary hearing in San Francisco Superior Court, a judge heard testimony from a husband and wife who helped snuff out the fire on the homeless man and his belongings the night of the incident. Dayne Farley said he and his wife, Erika Escamez, were walking home that night on Folsom Street after going to the F8 bar at 1192 Folsom Street.

Farley said they had seen a flickering light ahead on Folsom Street and, when they approached it, discovered it was a fire.

"We got closer and realized there was a homeless man sleeping around the fire," he said at the preliminary hearing. "Then we discovered he was on fire. He wasn't moving so we pulled him out of the flames and patted him down."

Escamez added in her testimony that the homeless man didn't gain consciousness for about 20-25 seconds after she and her husband began patting him down. He was unconscious due to drug intoxication and was lying in the doorway of the business located at 1060 Folsom Street, the couple said.

After patting the man down, the couple said that's when Diaz approached the scene.

"Mr. Diaz came from around the left and asked Erika and I if we had water," Farley said. "We said no. Then Mr. Diaz returned a few minutes later with the fire extinguisher," he said.

Escamez said that Diaz "helped us put [the fire] out," and said Diaz asked them to call the police, which they did.

She also said that the homeless man didn't seem to be in pain or suffer severe injury. As the Bay Area Reporter previously noted, court documents filed in March stated the homeless person's arm was burned, but did not specify how severely.

Both witnesses said they did not know Diaz before that night.

Stephen Engler, an investigator with the San Francisco Fire Department, also took the stand. He testified that after watching the surveillance footage that was captured from three different businesses the night of the incident, he determined the cause of the fire was deliberate.

"Watching the video, you can see through the opaque glass a person lying on the other side and then another person approach, squat down between the glass and sleeping person, and then you see a flash of light from the person's hand," Engler said, referring to the surveillance video shot from the interior doorway looking out on the street from the business located at 1060 Folsom Street.

The flash of light from the person's hand, Engler said, is consistent with the flame of a butane lighter. He said the person "made several attempts" to ignite the material in front of the glass.

Previous offenses
When Diaz was arrested for the February 19 incident involving the homeless man, he was still on probation from a November 2016 incident in which police said Diaz handcuffed and bit a chunk out of another man's scalp while impersonating a cop. He pleaded guilty to false imprisonment in exchange for assault and other counts in the case being dismissed. He was sentenced to five years probation and ordered to comply with a midnight curfew and wear an ankle monitor.

As previously reported by the B.A.R. in 2014, Diaz stood trial for the June 2011 death of Freddy Canul-Arguello, 23, in Buena Vista Park. During the trial, Diaz testified that Canul-Arguello had asked to be choked during a sexual encounter and that he'd accidentally killed him.

During Diaz's sentencing hearing in that case, Superior Court Judge Donald Sullivan dismissed the arson count. Sullivan said that keeping the count would require Diaz's "lifetime registration as an arsonist," which would "mar his character."

At the time, prosecutor John Rowland objected to the arson count being dismissed.

It was after Diaz's 2016 guilty plea to possessing an incendiary device that he was required to register as an arsonist.

That case stemmed from incidents in 2015 when Diaz was arrested again for allegedly starting fires in the Castro district. He pleaded guilty in August 2016 to possessing an incendiary device and a count of second-degree burglary. He was released that September after being sentenced to a year of mandatory supervision, the arsonist registration, and other terms.

Updated 8/30/18: This article was updated to reflect that David Diaz was held over for trial following the conclusion of his preliminary hearing.