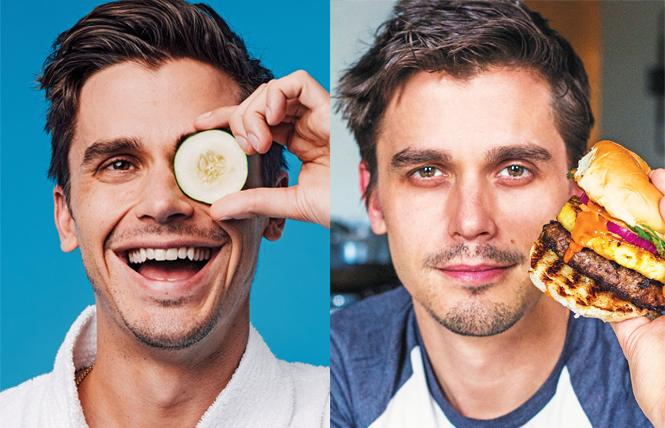 "I never imagined life would bring me to a point where I'd be sitting here staring at my cookbook," says Antoni Porowski, the Queer Eye star who will be promoting that book, Antoni In The Kitchen, at a panel discussion and recipe demo at the Castro Theatre next Wednesday.

For years, Porowski, 34, worked in New York restaurants to eke out an income while pursuing work as an actor.

"At one point I wasn't getting many parts and my roommate kept saying, 'Why don't you pursue something in the food world instead. You're so passionate about it and you know so much.' Since I was a kid, I've loved to cook. When I was 14, I would make dinner parties for my friends, but it was something personal, not anything I considered being involved with as a career. Having people think of me as a 'Food Guy' is something I actually fought against. I wanted to act."

In a linguine-tangle of ironies, Porowski's breakout role as a performer has been his gig as Food Guy on Queer Eye...for which he's been nastily criticized as insufficiently foodie. When the Netflix reboot's first season of episodes was released in February 2018, Porowski was served up as red meat at an online trolls' banquet.

As his Fab Five colleagues executed stunning makeovers of wardrobes, homes and hairstyles, Porowski taught the show's stuck-in-a-rut subjects to make hot dogs, grilled cheese and guacamole (The sacrilegious inclusion of Greek yogurt in the latter had the web's gastro-assholes and bitter queens hissing for weeks).

But as Porowski unflappedly explains, "Queer Eye isn't really a cooking program. On the show, I use food to connect with the people we're helping. It's a show about them and their journeys. When we first started, I got frustrated when they edited out the squeeze of lime I added at the end of a dish—it really adds brightness. Now I understand that that's not really the point."

Porowski recognizes that his role is at least as much about pop psychology as pots and pans.

Almost two years down the road, Porowski says the not-quite-acting, short-of-gourmet gig is "more fulfilling than anything I've done in my life."

"I feel like I'm really doing a service for the people we have on the show and people who watch it, too. I still think about plays I might want to do and I do table reads sometimes, but it would be hard to find a job that provides the same sense of meaning as this does."

"You can be passionate about multiple things," he's realized. "Its actually good for me, because I'm very ADD anyway."

Given the opportunities leverage his Queer Eye success to partner in a casual Manhattan restaurant, The Village Den; or show off his sexy gecko physique in Hanes underwear ads, or to write a cookbook, Porowski has gone all in. (He also maintains a passionate interest in vintage furniture).

"To be honest with you," he says about Antoni in the Kitchen, "I struggled at first when they asked me to do a book. I love to cook, but how do I come up with 100 recipes that fit together. Would it be about my Polish heritage? Would it be about easy, affordable recipes that I made as a student? My editor said yes, it should be both of those and more. Every recipe in the book has a story from my life connected to it. It's an autobiography in recipes. And I'm not one thing."