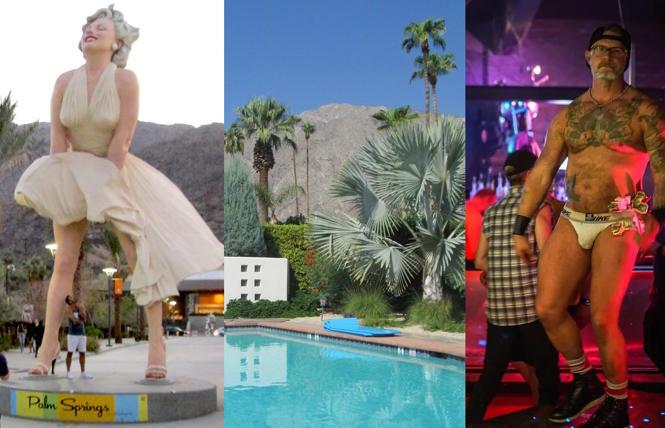 Palm Springs is gearing up for a busy fall with a number of events that take into account strict COVID-19 protocols. Like San Francisco, Palm Springs in July mandated proof of vaccinations for everyone entering bars and restaurants. Neighboring Cathedral City also implemented a similar vaccine mandate in August. Both cities also require masks to be worn indoors at all public places.

But the rules are a little more lenient than San Francisco's. You don't have to have vaccine proof to enter a gym and you can substitute a negative COVID test for a vaccination card as long as it is not older than 72 hours.

The new vaccination mandates also apply to large primarily outdoor events such as The Dinah, which will be held later this month. Promoters undoubtedly had hoped the pandemic would be behind them by now when they rescheduled that women's event from its traditional time in the spring to the fall.

Some of the gay resorts may also require vaccinations, so be sure to pack your vaccine card or download the state's official electronic version of the card online. All of the Greater Palm Springs area's legendary gay resorts have survived the pandemic. All of the area's gay bars have also managed to weather the COVID restrictions.

The first post-pandemic LGBTQ event will be the film festival, Cinema Diverse, September 16-30. Cinema Diverse will require attendees to be vaccinated or show proof of a negative COVID test. Film showings will also have limited capacity and most films will be shown twice to allow for social distancing. More streaming options will also be available.

Cinema Diverse will overlap this year for the first time with The Dinah. The lesbian-centric extended weekend runs Wednesday, September 29, through Sunday, October 3.

The Dinah will be followed a month later by the traditional Halloween block party on E. Arenas Road, just east of Indian Canyon Drive, the city's gayest block where most of the gay bars and LGBTQ-oriented shops are located. Leather Pride 2021 overlaps with Halloween, October 28-31. Palm Springs Pride runs November 1-7, highlighted by a parade the last day. 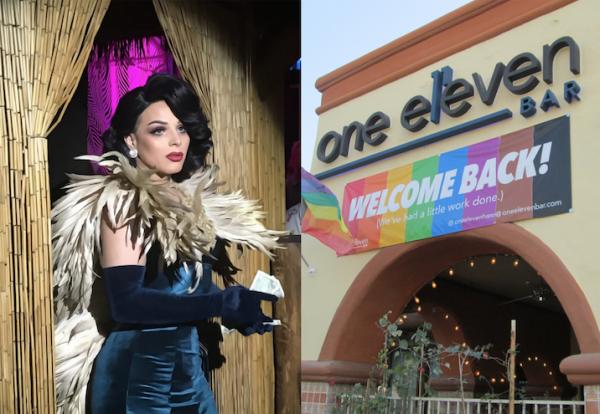 Gay resorts
Palm Springs has 11 gay resorts or an even dozen if you count the area's largest gay resort, Cathedral City Boys Club, in nearby Cathedral City. All are marketed to gay men and all are clothing optional.

The largest of the gay resorts is the aforementioned Cathedral City Boys Club, better known as CCBC. It's open for day passes, is host to a number of gay male events, and is a big draw for visitors and locals alike. It hosts several "men's bonding pop-up events" through the Guys 2 organization. Those events require COVID vaccines for all attendees.

CCBC's restaurant, Runway, is next to the resort but separate and coed. It has a cool aviation theme with airline carts. A catwalk runway drops from the ceiling for live performances. With the combination of delicious food and décor, since it opened three years ago, Runway has enjoyed a loyal repeat business.

The Hacienda at Warm Sands is a luxury boutique gay hotel that is known for its outstanding service. Breakfast and lunch are included with the rate.

The Triangle Inn, about a 15-minute walk from downtown Palm Springs, is a good example of a resort that like InnDuldge attracts a big repeat crowd. The Triangle Inn is kitty-corner from the Santiago. The beautiful hacienda-style property has two floors overlooking a huge pool and hot tub.

The biggest cluster of gay hotels is in the Warm Sands neighborhood, about a mile east of downtown. It includes the city's oldest gay resort, El Mirasol Villas, which was once owned by reclusive billionaire Howard Hughes and has been gay since 1975. It is next door to All Worlds Annex, a cruisy resort that is open for day passes.

The fabulous Vista Grande Resort is just around the corner and offers two pools, a huge hot tub, cooling waterfall grotto, and steam room. The aforementioned Hacienda is right next to Vista Grande.

Desert Paradise is a kitty-corner from the Hacienda. It changed ownership recently but still offers the top-notch quality for which it is famous. The always-busy InnDulge is just across from Desert Paradise.

On the north end of downtown is the Canyon Club Hotel, which includes a huge outdoor maze and koi pond. It is open for day passes. The Barefoot Inn is around the corner from Canyon Club and welcomes all men, not just bears.

La Dolce Vita resort is about a half mile south of The Triangle Inn and includes a men's spa. By the way, Cathedral City has a great stand-alone spa geared toward gay men called Men's Grooming Spot. It is part of a strip mall conveniently located next to CCBC. The spa's owner, Mark Okun, used to be a hairdresser to the stars. His former client list reads like a who's who in Hollywood. Photos with the stars from his Hollywood days are on display in the spa. Men's Grooming Spot offers haircuts, facials, body scrubs, manscaping, waxing, pedicures, manicures, and massage. After or before your treatment you can hang out in the spa's hot tub and sauna and it will soon have an outdoor lounge.

Nightlife
Most of the gay nightlife in the Palm Springs area is on E. Arenas Road, just east of Indian Canyon Drive, in downtown Palm Springs. That is where you will find Hunters with a main bar and patio and adjacent dance space.

StreetBar is just a few steps from Hunters and always attracts a big crowd of locals. The Levi-leather popular Eagle 501 and piano lounge Stacy's are the newest bars on the block. Quadz is a very popular video bar that keeps regulars coming back on its show tunes nights.

the bar Chill has a great open-air feel. BlackBook is known for its gourmet bar food and is the place to eat late.

The Tool Shed is on Sunny Dunes Road, about a half mile south of downtown. It is next to the gay stores Q Trading and Gear Leather and Fetish. Tool Shed is popular with bears and the leather crowd but attracts a wide variety of gay men. Its Thursday underwear night is legendary.

On the north end of town, you will find the fabulous Toucans Tiki Lounge. The women-popular club is known for its drag shows and dancing.

Cathedral City
Cathedral City is just to the south of Palm Springs. Most of the gay nightlife used to be there before the first gay bar opened on Arenas Road in the 1990s.

Chris Parman, Cathedral City's administrative LGBT liaison, told the Bay Area Reporter that according to a survey conducted by the city in 2016, 30% of the city's population identified as LGBT. The city's mayor, Raymond Gregory, is an LGBTQ pioneer in his own right. He worked in law enforcement as an out gay man for 27 years until he retired from that profession in 2017.

There are five gay bars in Cathedral City, including the Barracks with its own underwear night on Wednesdays. The Barracks is difficult to find at night even with your GPS. It's entrance is behind the Arco station on 67625 E. Palm Canyon Drive but the bright lights from the gas station kind of hide the entrance to Barracks.

The piano bar One Eleven is part of a strip mall a little farther south of the Barracks. Trunks has the same owners as the famed West Hollywood bar by the same name.

Trunks is just across the street from Cathedral City's newest attraction, its beautiful amphitheater. Amp Sports Lounge is the place to watch sports and be sure to catch "Shade Drag Food and Drink" every Saturday at 8 p.m.

The fabulous Roost Lounge is a video bar with a stage and live shows just steps away from Amp. Amp and Roost are a little hard to find but Amp is just behind the popular Trilussa Restaurant and Roost is just around the corner from Amp.

Runway is the place to eat and drink. Sunday nights are particularly popular with women for the wonderful singer Rebecca Clark 4 to 6 p.m. who does a spot-on impression of Barbra Streisand.

Cathedral City often gets overshadowed by Palm Springs but has a prominent place in LGBTQ history. Greg Pettis was the city's former mayor and was the longest-serving member of the City Council after first being elected in 1994. He was the first openly gay candidate to run for office in the Coachella Valley. Pettis pushed for the idea of the Coachella Valley's first rainbow crossing in 2016 to coincide with the city's LGBT days. Sadly, Pettis died in 2019 after complications from gastric bypass surgery. The crossing was repainted earlier this year in his memory. It's at Highway 111 and West Buddy Rogers Avenue, on both sides of the city's iconic bell tower.