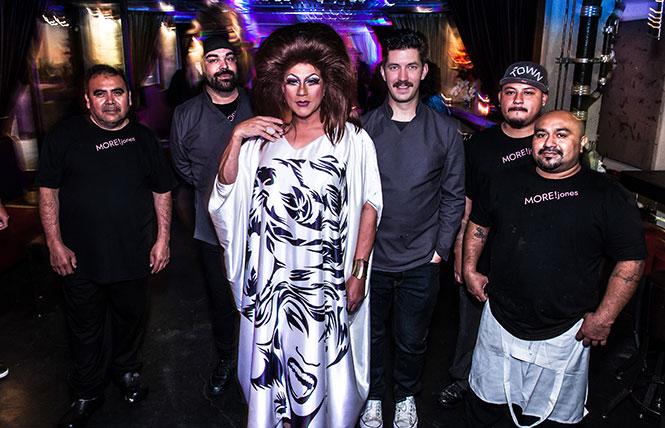 Juanita MORE! (center) with chefs Cory Alexander Armenia and Cole Church (to her right and left) with the kitchen staff of Jones. photo: Fred Rowe

In March of this year, two hundred of my closest friends and I led a parade down Polk Gulch to lay wreaths at the sites of former queer businesses along that infamous corridor. The Brass Liberation Orchestra held us together with a raucous rendition of St. James Infirmary Blues as we swept up dozens of unsuspecting gawkers who we'd somehow failed to scare away.

Wreath after wreath, we mourned the passing of a bygone queer renaissance along Polk Gulch, marking facades that have since transformed into new, less queer establishments, or - worse - been left vacant. And in the short months since our macabre procession, we've said farewell to yet another relic of this city's gaiety, the Nob Hill Theater. 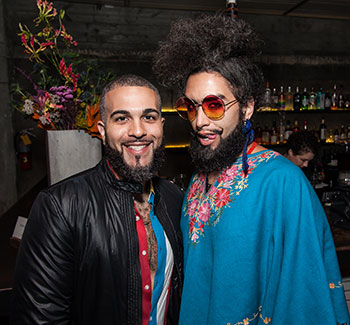 Surviving this city has never been easy. And let's be honest, some of your favorite haunts caved after decades not because business took a dive, but because their owners cashed out to Palm Springs. (Who can blame them, really?) If we can still cling to any remnant from Polk Street's queer zeitgeist, though, it's that it's always been a hustler's game.

That said, in spite of your creature comforts, change is not always bad, and in a city renowned for its tendency toward reinvention, part of surviving is at least being open to embracing new things. You don't need to line up for the block's most recent addition. I appreciate cautious hesitation in a person, but it doesn't hurt to check it out on off-hours.

That said, let me be clear about a couple of important things. First and foremost, by the time you're reading this, I'll have officially launched my takeover of the restaurant at Jones (620 Jones St. at Geary), and you'd better line up because every Tuesday through Sunday from 5pm to 10pm, my meatballs just might change your life. The math is simple - if you don't come to eat I don't have a restaurant. Second, and the real point of this week's column, you don't have any business mourning loss of queer businesses if you're not doing anything to keep them in business.

Shop Queer
Supporting small queer business means getting your shoes shined at your local queer-owned cobbler, flirting with the racks at that cute atelier down the street, and tossing back a Paloma with the regulars at your local gay watering hole.

So let's go for a little stroll through some of my favorite queer-owned businesses in this city, and I'll remind you along the way that you have the power to make sure that they stay in business. I live and shop mostly within a four-block radius of my house, so stop your whining and grab some doggie bags for Jackson.

Gimme Shoes, 416 Hayes St.
To know me at all is to know that I've always been a shoe whore. One of my earliest memories was from primary school when my godmother taking me shopping for the one pair of sneakers I would be wearing for the entire school year. It would have been a wise choice to get the sneakers she was coaxing me towards, but I was eight years old and I was very excited by the opportunity of being allowed to pick out the ones I really wanted. I don't know why anyone would be surprised that I chose the flashiest dress shoe in the store. And so Juanita was born. 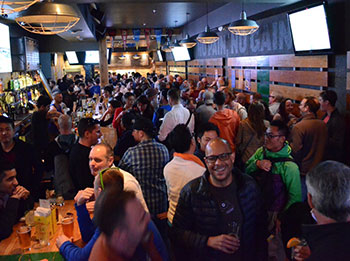 Those shoes were ridiculous on the basketball court, but instead of adapting, I simply quit stomping around the court. My lifelong love of fancy footwear had begun. Now it's an addiction as bad as gambling. I wish there was a Shoe Addicts Anonymous meeting where I could share my struggles with similarly-afflicted people. (If you've made it this far into the column - yes, this is actually a cry for help.)

When Gimme Shoes opened its doors right around the corner from my tiny Tenderloin apartment in the 1980s, I was hooked. It was a tiny space in the bottom of an apartment building and had just a few shelves with exposed brick walls. But each shoe was special. The owner, Jary Warwick, has kept his finger on the pulse of the most coveted styles of men's and women's shoes, and, naturally, his finger on my beating heart.

Hi Tops 2247 Market St.
Speaking of those boys on the basketball court, just because I refuse to run laps in high heels doesn't mean I've stopped drinking with them, calling out their thin machismo from under my towering wig, and, by the end of the night, helping them into a cab after they've helplessly poured their feelings all over the locker room floor. And Hi Tops is my favorite place to do it.

Much has been written about this thriving Castro hotspot, including in the pages of Sports Illustrated. But the real reason I keep coming back is that of the generosity and community awareness of owners Jesse Woodward and Dana Gleim. Together, these two have turned a kitschy gay sports bar concept into a true community hub, frequently hosting events to raise money for this or that cause and going above and beyond to create a space that is inviting to more than just the minimal-BMI jock set. And now they have just opened another bar in West Hollywood! 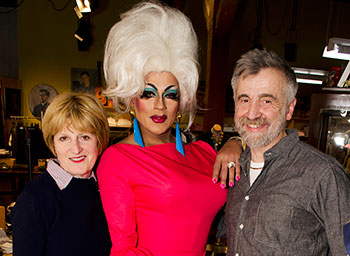 M.A.C. Modern Appealing Clothing, 387 Grove St.
I've been a fan of Modern Appealing Clothing since siblings Ben and Chris Ospital and their mother Jeri first opened the shop in 1980. Back in those days, the shop was located on Post Street just a few blocks from Polk Gulch, littered as it was with queer-owned shops and bars. Polk Gulch gentrified pretty rapidly over the next several years and couple of decades, and the neighborhood lost a lot of its queer charm. But for a long time, before it moved to Hayes Valley, M.A.C. held its ground amid rapid change.

This family-owned store has remained a fashion staple for San Francisco's seriously stylish. In spite of the increasing accessibility of major international fashion brands, M.A.C. has showcased and empowered local designers and artists, building community and facilitating the growth of San Francisco's local fashion scene. 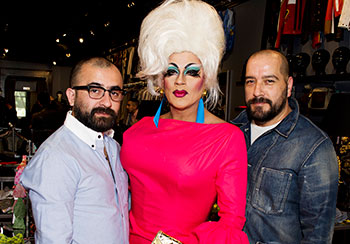 Sui Generis, 2231 Market St.
Owned and operated by my dear friends Miguel Lopez and Gabriel Yanez, Sui Generis quickly became a Castro staple after moving to its Market Street location in 2008. Miguel and Gabriel have supported my annual Pride Party by selling tickets every year. I hope you know that it is my way of getting you off of Eventbrite and into the store - to also hopefully shop.

The consignment store model is perfect for those with moderate incomes but expensive taste. While Mr. David makes most of my gowns these days, I'm not shy about getting a great deal on designer brands from time to time, and Sui Generis is the place for it. 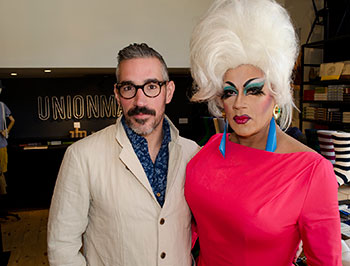 Unionmade, 493 Sanchez St.
Oh gosh, this retail-heavy list is really beginning to show my indulgent side. But I have to put in a good word for Unionmade and its delightful owners and community members Todd Barket and Carl Chiara. Unionmade might have a higher price point, but this isn't fast fashion. This isn't disposable wear. Every item at Unionmade is a time-tested style and certain to last you through all of San Francisco's seasons.

It's been my privilege to partner with Unionmade on a number of projects, including taking over their 18th Street-facing wall with an enormous mural of myself. As a local icon, a distinction I hold without qualification, I'm particularly proud of this brand adjacency.

There are so many more queer businesses I could write about - more than print space will allow. So, that's all for now. My fingernails are strained from all of this click-clacking at the keyboard, and Jackson needs to go out for a pee.

See you next time.
Loads of Love, Juanita