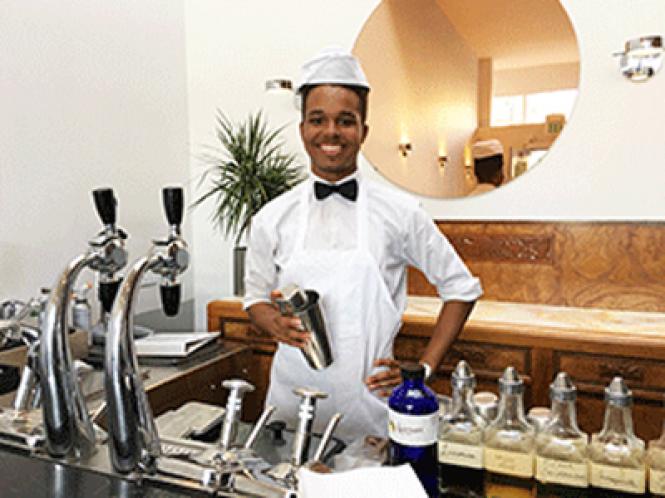 After more than a year of construction and permitting delays, The Castro Fountain is finally open, with a two-page menu of ice cream, cakes, pies, cookies, and fountain drinks.

"Everything ­-and I mean everything- is made in-house," said owner Juliet Pries, a pastry chef-turned entrepreneur who has lived in the neighborhood for almost two decades.

Located at 541 Castro, between 18th and 19th streets, where the French cosmetics firm L'occitane was located, the old fashioned parlor has a 1930s Art Deco soda fountain where handmade sodas are made to order.

Pries opened her first ice cream parlor, The Ice Cream Bar in Cole Valley in 2012, after being involved in the management of the Kezar Pub for several years.

Once that business was up and running (and featured in dozens of publications, including the New York Times) Pries was approached by the owner of 541 Castro, who thought an ice cream shop would do well in that location.

"I loved the neighborhood," she said. "I only needed a little bit of encouragement to think about opening here."

With just a month under her belt, Pries said business is doing "really well. I have some regulars who come all the time," she said. "The reception from the community has been great."

Pries has already connected with community groups, hosting an ice cream social for the New Bear Republic, in which the shop donated 25% of the proceeds to the AIDS Life Cycle. "I hope to do more of these," she said.

Hiring staff has become "much more challenging" since the Cole Valley shop opened five years ago, she said. But through word of mouth and advertisements, Pries has been able to hire everyone she needs.

"And of course I'm here seven days a week as well," she added.

Just before Pride, the Fountain's pastry chefs created a rainbow layer cake, which has been a big seller, said Pries. About a dozen of the whole cakes have been ordered for take out, she said. Whole custom ice cream cakes are coming soon, she added.

There are always two vegan flavors, such as peach-pluot and coconut maple pecan. Ice cream can be ordered in a cup or in a house made waffle cone or in a sandwich of homemade cookies.

For fountain drinks, Pries concocted "Castro Street Cola" from her proprietary blend of 16 botanicals. The cola is the base for the L-O-L-A float (named after the Kinks song), with tart cherry syrup, vanilla ice cream, acid phosphate, and soda.

Malts and milkshakes come in standard flavors, as well as a few designed for the new parlor, including The Harvey Milk(shake), with roasted pineapple and passion fruit syrups, two eggs, cream and a dash of tart cherry syrup.

There are also ten different sodas on the menu, including Russell's Sassafras Root Beer, made with 11 herbs and spices; chocolate phosphate made with house-made Valrhona chocolate syrup, phosphate and soda; and old fashioned egg creams, with a whole egg, cream, vanilla extract, sarsaparilla tincture, and soda.

While the Castro Fountain is the only place in the neighborhood where you'll find homemade ice cream, Mitchell's ice cream is available in cones or dishes at two locations: Castro Ice Cream and Dessert at 451 Castro St., where you can also find homemade Turkish pastries and at Sweet Inspiration, at 2239 Market St., where you can also find baked goods, sandwiches, and coffee.
The Castro Fountain's owner Juliet Pries adds syrup to a multi-layered ice cream float. photo: Sari Staver

Mitchell's is known for its Mexican (horchata, Mexican chocolate), Peruvian (yucuma) and Filipino (two types of coconut) options, although the Castro shops selling Mitchell's have a limited selection of flavors.

Outside the Castro, more than a dozen new ice cream shops have opened in San Francisco in the past year. Here a few of the unusual spots.

Known for its "chimney cone," which is basically a waffle cone where the waffle is a doughnut, this Mission shop serves Asian and Hawaiian-inspired flavors like butter mocha and several matcha varieties, as well as eight coconut-based vegan options daily. www.Gardencreamery.com

Soft serve ice cream made with organic milk and a variety of toppings, such as honeycomb, cotton candy, and dark chocolate. www.Honeycremeusa.com

Known for its unique ice cream flavors, including a number with cocktail themes, such as the negroni or old fashioned. www.Littlegianticecream.com

This Portland-founded shop is known for its unique flavors such as green apple sherbet and peach vinegar cobbler with toasted nutmeg. The owners try to add ingredients from local food producers such as Sightglass coffee. www.Saltandstraw.com.

Smitten Ice Cream, 904 Valencia St. and three other locations in the city.

At all locations, the ice cream is made in front of you in about 90 seconds, using liquid nitrogen for a smoother, denser cream. Flavors include Blue Bottle espresso, TCHO 60.5% chocolate, and seasonal options such as sweet corn with berries and rhubarb crisp.