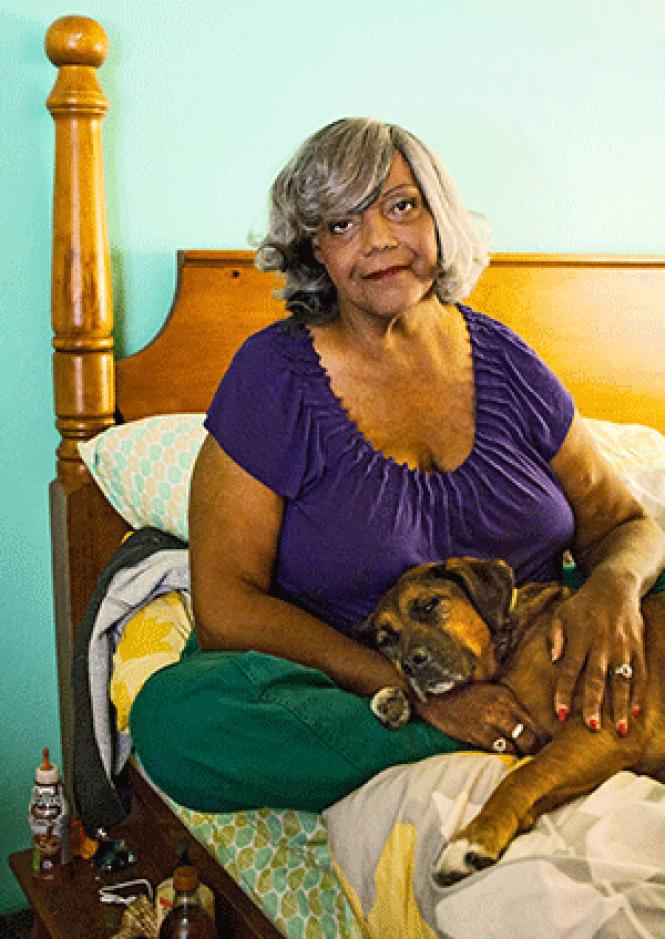 Shifts in social climates require decades of contextual movement work, and there's no better testament to that than Miss Major Griffin-Gracy, a self-identified formerly incarcerated black transwoman whose lifelong activism has remained consistently central to the progression of trans rights and visibility.

In commemoration of her life's work, the San Francisco LGBT Pride Celebration Committee Board of Directors named Griffin-Gracy, widely known simply as Miss Major, one of this year's Pride parade community grand marshals alongside other selections that communicate staunch support for the transgender community. Griffin-Gracy is currently the longtime executive director of the Transgender GenderVariant Intersex Justice Project, an organization that works to end human rights abuses committed against incarcerated transgender, gender variant/genderqueer and intersex people.

In company with Griffin-Gracy, 74, is celebrity grand marshal and bestselling author Janet Mock, who underlines Griffin-Gracy's impact on her own life. Mock described Griffin-Gracy to the Bay Area Reporter as "brilliantly resourceful, resilient, and legendary," and didn't stop there.

"The mere fact that she chooses to be visible and vocal about the multilayered facets of her existence created a groundwork and foundation onto which I could move past survival and actually thrive as a young trans woman writer of color," Mock told the B.A.R. "Without Miss Major's contributions and work, I would not exist."

Also being honored with Griffin-Gracy is 16-year-old community grand marshal Jewlyes Gutierrez, a transgender Hercules Middle/High School student who faced a misdemeanor battery charge last year after a fight related to long-term bullying broke out. (She participated in a restorative justice program and the charge was later dropped.) Griffin-Gracy, Gutierrez told the B.A.R., "is a pillar in the community," a predecessor she's "honored and blessed" to be celebrated with.

Trans March is the organizational grand marshal, and Chelsea Manning, a transgender soldier convicted last year of leaking classified content exposing American military follies, is an honorary grand marshal. Like never before, the transgender community is taking center stage at this year's celebration, a precedent that, according to Pride board President Gary Virginia, runs parallel to larger cultural trends.

"The many nominations and votes related to the transgender community happened organically amid an increase in visibility on the national and local level," Virginia said. "Transgender people are the most discriminated group within our LGBT civil rights movement. We work to make sure our annual celebration reflects the most pressing issues facing our LGBT family."

While Griffin-Gracy is quick to redirect attention from her public accolades to community issues at hand, the honor, she said, brings her full-circle. But, it's less about personal acknowledgement and more about witnessing the large-scale appreciation of transwomen, particularly transwomen of color.

"We're finally getting some recognition," she said. "I'm proud it finally happened and I'm alive to see it because a lot of my girlfriends haven't made it this far. I'm trying to get as many girls as possible together at the parade so people can see we're a force to be reckoned with; we're not going anywhere."

Griffin-Gracy has always been a "force." She's lived her life on the frontlines â€" not the frontlines of marches, parades, or lobbying initiatives â€" the frontlines of the 1969 Stonewall riots, the 1971 Attica State Prison uprising, the early AIDS epidemic, and every other survival front occupied by trans women of color to stay alive.

After being born and raised in Chicago, Griffin-Gracy moved to New York City where she established a supportive community that helped her grow into her identity. At the time, bars and clubs were the primary avenue through which LGBT people met each other. The Stonewall Inn, a working-class LGBT bar in Greenwich Village, was a particular favorite of Griffin-Gracy's.

"Stonewall provided us transwomen with a nice place for social connection," Griffin-Gracy said. "Then, only some gay bars let us in, others would chase us out. We could go to Stonewall and everything would be fine, we didn't have to explain ourselves."

During that period, anti-LGBT sentiment was supported by law; police raids on LGBT bars and clubs were commonplace. Griffin-Gracy was a regular patron of Stonewall, and was there "perking up with a girlfriend" the night of the police raid that subsequently triggered three days of riots in June 1969.

"The boys [police] were always targeting those with social stigma around them â€" gay men, lesbians, but not as much as us," Griffin-Gracy said. "This one night, though, everybody decided this time we weren't going to leave the bar. And shit just hit the fan."

Widely credited as the catalyst for the modern LGBT civil rights movement, the Stonewall riots, like many movement initiatives, didn't function without their own internal hierarchies. Griffin-Gracy distinctly remembers transwomen of color being excluded from the protests, a dynamic still perpetuated today.

"After the raid happened, I remember Sylvia Rivera and I going to a gay rally in Central Park," Griffin-Gracy said, referring to the late trans activist who died in 2002. "Sylvia went up to speak and they booed her offstage. We were so heartbroken; I cried for days. There was this sea of white people and they had the audacity to do that. The thing is, this disconnect is still happening. I saw a movie last year about Stonewall and didn't see one transwoman of color in the whole film."

For Griffin-Gracy, it took participating in another act of resistance to truly claim her politicized self. In September 1971, a four-day uprising in New York's Attica State Prison claimed the lives of 10 hostages and 29 inmates. Incarcerated there at the time for two felony convictions, Griffin-Gracy experienced the upheaval firsthand, as well as the inhumane living conditions and discriminatory treatment that served as precursors to the uprising.

"It was an awakening," Griffin-Gracy said. "Trans or not, being considered a black male affected my relationship with everyone I met. And some of the atrocities I saw happen to my trans sisters were devastating. [The guards] would tell us they could take us off property, bury us, and no one would know. I got out and got my act together, started thinking about what I could do to help the girls so they don't have to go through that."

Since then, Griffin-Gracy's intent has only been strengthened by the challenges she's faced. She remembers a particularly painful event that solidified for her, as a sex worker at the time, the importance of support between transwomen engaged in the trade.

"One of my dear friends, a trans woman of color, was murdered in her apartment," she said. "She had two dogs, neither of which would've let a stranger near her. After talking with the other girls we figured out someone she knew had done it. We told the police but they didn't care. We decided that whenever one of us got into a car, another girl either saw the driver or the license plate. No one was going to help us but us." Â

In 1978, Griffin-Gracy moved to San Diego where she began a decade of ground-level community building work. What began as working at a food bank grew into providing direct care services; supporting transwomen through incarceration, addiction, and homelessness. And then the AIDS epidemic hit. Attending two funerals per week was status quo, she said, and ensuring her sick friends were comfortable via proper home health care became a priority.

By the time Griffin-Gracy moved to the San Francisco Bay Area in the early 1990s, she'd worked with numerous HIV/AIDS organizations. Continuing along the direct care track, she worked with San Jose's AIDS Project, San Francisco's City of Refuge, Glide, and the now-defunct Tenderloin AIDS Resource Center where she created "drop-in" services that enabled more community members access to lifesaving resources. Then, in 2003, she found TGIJP.

"TGI is the one place that is my heart," Griffin-Gracy said. "I work with TGI so incarcerated girls know someone cares about them, wants them to do better, and will do whatever it takes to help."

In nearly every position she's held, Griffin-Gracy is credited with spearheading direct service initiatives that emphasize interpersonal care and connection. Intersectional and complex, her story is currently being made into a documentary titled Major! that is slated for late summer release. Produced by Annalise Ophelian and StormMiguel Florez, the film also highlights LGBT elder care. Health challenges, medical costs, and budget cuts to TGIJP have recently left Griffin-Gracy without sustainable income. A donation circle has been created to facilitate her care through intergenerational support.

There's a long way to go in the battle for LGBT equality, but Griffin-Gracy remains optimistic. The expanding freedoms she's witnessed in her lifetime, particularly for trans women of color, keep her energized.

"When I see younger girls out shopping in the daytime in their attire," she said, "it fills my heart with so much pride. Our increased visibility is marvelous. Who knew it would turn out like this?"