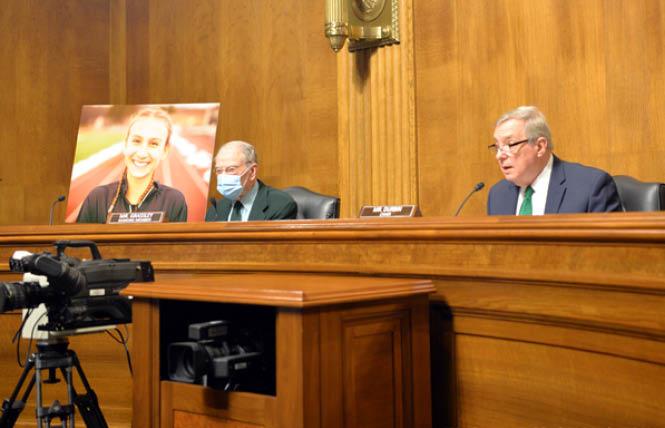 A Senate hearing on the Equality Act, which would expand the prohibition on discrimination under federal law, put on full display March 17 the use of fear-mongering about women's safety and the integrity of women's sports as a tool to thwart attempted progress on LGBTQ rights, although more traditional objections based on religious liberty also played a role.

Senator John Kennedy (R-Louisiana) pulled no punches during the Senate Judiciary Committee hearing — the first-ever hearing for the Equality Act in the U.S. Senate — in heightening fears about threats to women in sex-segregated spaces.

When Abigail Shirer, a journalist who has built a career campaigning against gender transitioning for youth, was presenting testimony as an expert witness, Kennedy went straight to the locker rooms.

"Would this bill prohibit the boy with gender dysphoria from exposing his penis to the girls?" Kennedy asked.

The questioning put Shirer, who was testifying against the Equality Act, in a bind. The Equality Act does prohibit discrimination on the basis of gender identity in locker rooms, but says nothing about that particular issue and laws against lewd conduct are in place. "I'm sorry would it prohibit that?" Kennedy asked.

When Kennedy repeated the questions, Shirer replied, "I don't believe the bill addresses genitalia." Kennedy went to ask her if it prohibits them from dressing together. "No," Shirer replied. "Would this bill prohibit them from showering together?" "No." Kennedy then asked about boys being able to access girls' sports.

Kennedy said he had intended to get to that point and asked her if the Equality Act would require schools to allow boys with gender dysphoria to compete in girls' sports. Shirer replied, "Yes, anyone who identifies as a woman."

Senator Charles Grassley (R-Iowa), top Republican on the committee, brought up a specific incident in Connecticut where transgender girls were allowed to compete in a girls track event. Grassley named one of the girls who filed a complaint over the situation, Chelsea Mitchell, as he displayed images of three girls involved behind him.

"Many women and girls before her fought for legal protections under Title IX, which recognizes that sex-specific distinctions are appropriate in some instances," Grassley said. "As a father, grandfather, and husband, I have celebrated the athletic successes of talented young women in my own family, so I am deeply concerned about this act's potential negative implications for all girls and women in sports."

The Equality Act says nothing about sports, but would prohibit discrimination against transgender people in education and federally funded programs. It should be noted the ruling last year from the U.S. Supreme Court in Bostock v. Clayton County, which found anti-LGBTQ discrimination is an illegal form of sex discrimination, has broad applications, including for Title IX of the Education Amendment of 1972, which bars discrimination on the basis of sex in sports. As a result, refusing to allow transgender kids in sports would likely already be illegal.

Fears of the impact of LGBTQ rights advances on religious practices also came up during the hearing. Senator Mike Lee (R-Utah), for example, raised a question about whether churches that conduct services with members of the congregation divided by sex would be liable as a public accommodation under the Equality Act.

Mary Rice Hasson, a fellow in Catholic studies at the Ethics & Public Policy Center, a conservative think tank in Washington, D.C., served as a Republican witness and maintained churches could be held liable under the Equality Act "by expanding public accommodations to mean wherever Americans gather, even virtually."

"Compromise your religious beliefs or risk endless litigation," Hasson said. "Recipients of federal funds are also targeted, even for the simple act of maintaining sex-segregated bathrooms."

Human Rights Campaign President Alphonso David, responding to an earlier question from Senator Richard Durbin (D-Illinois), contested the idea that churches would be liable, which would be consistent with the religious exemption the Equality Act would retain under the Civil Rights Act of 1964.

Contentious issue
A major issue of contention was a provision of the Equality Act that would preclude the use of the 1993 Religious Freedom Restoration Act, a law intended to protect religious minorities, as a potential legal defense in cases of discrimination. Scolding Republican critics who indicated the Equality Act would gut RFRA, Senator Richard Blumenthal (D-Connecticut) said the bill does nothing of the sort, but Senator Josh Hawley (R-Missouri) shot back there was "an explicit carve out in the Equality Act for RFRA."

"I'm aware of no other law that seeks to shred RFRA in this way, and the effect of it basically is that churches, religious ministries, Christian colleges and universities, they'll be unable to pursue their missions, particularly if they involve service to the poor, service to the needy," Hawley said.

During a hearing in which Democratic members of the committee largely focused on their witnesses and Republicans stuck with theirs, Kennedy was an exception and asked David if there are more than two sexes. David initially deferred to medical experts and noted sex and gender can be different concepts, but then concluded "it's not limited to two," citing for example people who are intersex.

Shirer made an attempt during the hearing to qualify her opposition to the Equality Act, saying it is based on potential consequences of the bill on women's safety.

"If S. 393 merely proposed to extend employment, and public housing rights to gay and transgender Americans, I would be supporting this bill, instead of testifying against it," Shirer said, referring to the bill. "I am here today because the bill does much more, and no one who wrote it appears to have thoughtfully considered what it would mean for women and girls."

Tillis open to 'compromise' on LGBTQ rights
Despite the issues raised by Republicans, one key moment came when Senator Thom Tillis (R-North Carolina), whose vote would be key to reaching the 60-vote threshold to end a Senate filibuster on the Equality Act, appeared to make a good faith effort to reach across the aisle.

"On the one hand, we have the fact that even in 2021, our LGBTQ friends, family, neighbors, still face discrimination from employment to health care to housing to homelessness among LGBTQ youth is a very real problem with discrimination," Tillis said. "I think it's wrong, in any aspect. But on the other hand, we have millions of Americans who are people of faith who have serious and legitimate issues of conscience."

Although Tillis said the Equality Act "falls short of the goal" he seeks in addressing both sides, he added he's "open to finding a compromise." The last committee member to ask questions during the hearing, Tillis also lamented members of the committee "were talking past one another" about their concerns without coming closer to an ultimate conclusion.

Two issues that appeared to concern Tillis were the provision in the Equality Act against use of RFRA in cases of discrimination and whether the Equality Act's ban on LGBTQ discrimination in federally funded programs would require prisons to house transgender women consistent with their gender identity. Tillis posed a question on whether a male serial rapist could say he identified as a woman and be allowed in women's prisons; Shirer said that "absolutely" would be the case.

Meanwhile, proponents of the Equality Act continued to make their case for the bill based on its general objectives, to ban anti-LGBTQ discrimination in all aspects of public life.

Durbin, kicking off the committee hearing, displayed a video highlighting milestones in the LGBTQ movement, including the 1978 election of Harvey Milk to the San Francisco Board of Supervisors and the swearing in last month of Pete Buttigieg as U.S. transportation secretary, as well as media coverage on passage in the U.S. House of the Equality Act.

"Unfortunately, some opponents have chosen to make exaggerated claims about what the Equality Act would do," Durbin said. "Let me be clear, those of us working to pass this legislation are open to good faith constructive suggestions on further improvement and strengthening the bill. In fact, that's why we're having this hearing, but many of the texts on this bill are nothing more than the latest in a long, long, long line of fear-mongering targeting the LGBTQ community."

Stella Keating, a 16-year-old student from Tacoma, Washington, made the case for the Equality Act as a witness in the simplest way possible: Introducing herself as a transgender person.

"Hi, I'm Stella, and I'm transgender," Keating said. "I'm here before you today, representing the hundreds of thousands of kids, just like me who are supported and loved by their family, friends, and communities across the country."

Strategy talks in high gear to get Equality Act across the finish line
Sign up!