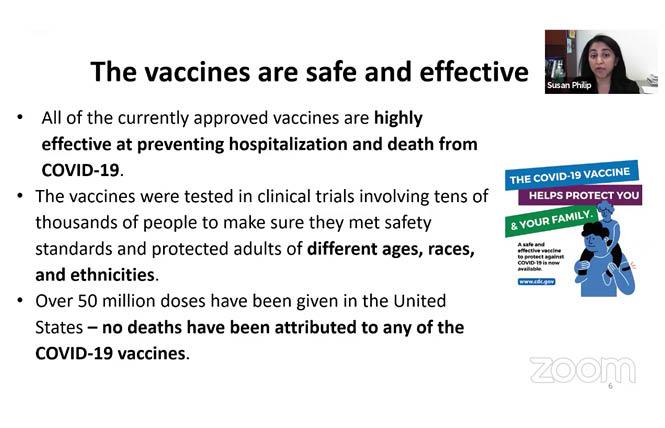 A slide from the March 9 virtual town hall highlights the safety of COVID-19 vaccines. Photo: Screengrab

San Francisco officials held a virtual town hall intended to inform LGBTQs in particular about the three authorized COVID-19 vaccines, while on the Peninsula, the San Mateo County Pride Center announced it hopes to set up a vaccination clinic for the queer community.

Dr. Susan Philip, San Francisco's acting health officer, said during the March 9 town hall that it is expected that beginning Monday, the state will allow health care providers to use their own clinical judgment in vaccinating individuals ages 16-64 who are "deemed to be at the very highest risk to get very sick from COVID-19" due to medical conditions.

The city's Department of Public Health published an advisory March 10 confirming that people with HIV will be part of vaccination phase 1c, which begins March 15.

On another topic, Philip said that people taking hormones should not worry about their treatments or the vaccine being less effective due to an interaction.

"There's no information to suggest there is a possible interaction with hormones that would make hormones less effective or the vaccine less effective," Philip said in response to a pre-submitted question.

The same holds true for people being treated for HIV, and people taking PrEP, she said.

"From evidence we have, there is no interaction with HIV medications whether as HIV treatment or HIV PrEP," she said, responding to another question. "Do not worry."

Philip was introduced by Clair Farley, a transgender woman who is a senior adviser to Mayor London Breed and executive director of San Francisco's Office of Transgender Initiatives.

"Over the last year, we have worked to support COVID relief, and I'm so proud of our LGBTQ community for showing up for each other, for following stay-at-home orders and, as we move toward reopening, we must continue to do our part: get vaccinated and check in on our neighbors," Farley said. "This is why today's event is so important."

Philip apologized for years of mistrust, some deserved, of the medical establishment on the part of minority communities, particularly the LGBTQ community. Still, she stressed that "the vaccine offers hope, a ticket out of this pandemic, and a return to the things we enjoy, such as making a living, for some, and being with others without fear of infection."

Philip said that vaccine distribution is trying to compensate for some of the inequalities in health care unmasked by the pandemic. For example, the city's three mass testing sites — at Moscone Center in the South of Market neighborhood, the City College of San Francisco main campus by Balboa Park, and at the farmers market in the Bayview, were chosen to be on the "southern and eastern" sides of the city because these areas have been hit hardest by the virus.

Further, the state announced March 4 that 40% of its vaccine supply will go toward 400 of the most vulnerable ZIP codes in the state, which total a population of 8 million vaccine-eligible people, according to Dr. Mark Ghaly, California's health and human services secretary. However, that plan leaves out the Bayview and the Mission district, as Mission Local reported. The Tenderloin and Treasure Island were included on the state's list.

There are three vaccines being used in the United States that were granted emergency use authorization by the federal Food and Drug Administration: Pfizer-BioNTech, Moderna, and Johnson & Johnson. The former two require two doses, while the latter is a single shot.

"The Pfizer and Moderna vaccines are a new technology called mRNA vaccines," Philip explained. "They came out first, but within the past week[s] we have seen the approval of the Johnson & Johnson vaccine, which uses a virus vector that does not infect people themselves. People cannot get COVID-19 in a vaccine."

According to the U.S. Centers for Disease Control and Prevention, mRNA vaccines do not put a weakened virus into a patient's body. Instead, "they teach our cells how to make a protein — or even just a piece of a protein — that triggers an immune response inside our bodies. That immune response, which produces antibodies, is what protects us from getting infected if the real virus enters our bodies," Philip said. This technology is newer.

Johnson & Johnson's is an adenovirus vector vaccine, which uses a harmless virus to deliver the blueprint for a SARS-CoV-2 protein found on the surface of the virus. The immune system will then generate a response to this protein. This is a decades-old technology.

"These vaccines, including Johnson & Johnson, prevent [the most severe complications] from happening," Philip said. "When the government set the ground for effective vaccinations, it was much lower; 50%, 60% was considered a success."

Because none of the vaccines use an attenuated virus, there is no risk from becoming sick with COVID-19 from receiving a vaccine, Philip said. While some people experience flu-like symptoms after a second dose of one of the currently authorized mRNA vaccines, this is just a sign one's immune system is working properly at producing antibodies; though the lack of this sign should not be construed that the immune system is not working, Philip said.

"All three of them prevent the most severe complications of COVID-19," Philip said. "They keep you from getting to the hospital or dying. ... Not a single person who received a vaccine in [the] trials died of COVID-19. In real life, they may not be as perfect, but that gives us a lot of confidence."

Philip said that while "some people worry about the speed with which the vaccines came to us," no steps were skipped. Rather, Philip said, some steps were undertaken simultaneously (such as production and trials).

"The government put a lot of money to get manufactur[ing] ready," Philip said, working with the idea that "let's do everything as though it is going to work."

A conservative estimate is that everyone over 16 who wants to be vaccinated will be able to get one by the summer, Philip said. Those under 16 will need to wait for more trials, and a timeline of fall 2020-winter 2021 is estimated.

Keep wearing masks
While vaccination offers protection from severe cases of COVID-19 in most cases two weeks after receiving one's final shot, Philip said that people who have been vaccinated are still urged to wear masks in public and around unvaccinated people for two reasons.

The first is because the jury is still out on if vaccinated people, who themselves would be protected against severe COVID-19 complications, could still pass the SARS-CoV-2 virus to an unvaccinated person, creating in them an infection.

"There's a small possibility that after vaccination, people could get a silent infection and pass it on," Philip said. "To be on the safe side, we don't want to put unvaccinated people at risk."

The second is to avoid "disrupting the social norm" of mask wearing.

Currently, individuals 65 and older, as well as those who work in education, child care, emergency services, food (including restaurant workers), and agriculture are eligible to be vaccinated. Vaccinations are free of charge, offered by the city, select pharmacies, and health care providers.

People can sign up at www.sf.gov/vaccinenotify to get a text or email when they are eligible to receive a vaccine.

As of March 10, 13% of San Francisco adults are fully vaccinated (compared to 3% on February 3), and 27% have received at least one dose of vaccine (both mRNA vaccines are double-dose shots; only 10% had received two doses as of February 3), according to data made available by the city.

The town hall was produced by the virtual outreach team of the city's COVID Command Center and was hosted by the trans initiatives office, the Department of Public Health, and the SF Bay Area LGBTQ COVID Relief Coalition.

San Mateo County survey may lead to LGBTQ vaccination clinic
The same day as the town hall, the San Mateo County Pride Center announced the results of a survey highlighting the effects of the pandemic in the LGBTQ community on the Peninsula.

Francisco Sapp, a trans person who is the program director for the center, told the Bay Area Reporter March 11 that the center has high hopes this will lead to an LGBTQ vaccination clinic.

"The COVID impact report we were able to produce was shared widely with San Mateo County officials and it was received positively," Sapp said.

Sapp said that there is not a certain timeline on when this may come to fruition, but that "given the nature of everything we've been able to show, there is a demonstrated need there."

The Pride center, which is in the city of San Mateo, is currently "operating fully remotely" so that site may work for the clinic, Sapp indicated.

"There is a possibility our site could lend itself," Sapp said.

The survey was based on just over 500 responses from community members in San Mateo and Santa Clara counties in the last two months of 2020. It found, among other things, that 85% of respondents reported negative impacts on their mental health and well-being due to the pandemic; that 55% were unable to access "the activities that had sustained them prior to the pandemic" and that 36% "reported negative impacts on financial stability."

Sapp said that these responses, and more, highlight the disproportionate impact of the COVID-19 pandemic.

"Some of the numbers that were most sobering for me were the full, sheer impact," Sapp said. "When you think about the comparative analysis, look at the intersectionalist, LGBTQ people with disabilities were 7.3 times more likely to have moved into unsafe housing. These are people and we need to figure out the stories behind the numbers."

Sapp said that the survey that produced the impact report came about because of a chronic lack of data about how COVID-19 was impacting LGBTQs. The B.A.R. has reported extensively on the lack of sexual orientation and gender identity, or SOGI, data.

COVID vaccines for teens are now available in SF, elsewhere

California OKs COVID vaccine boosters for all adults
Sign up!