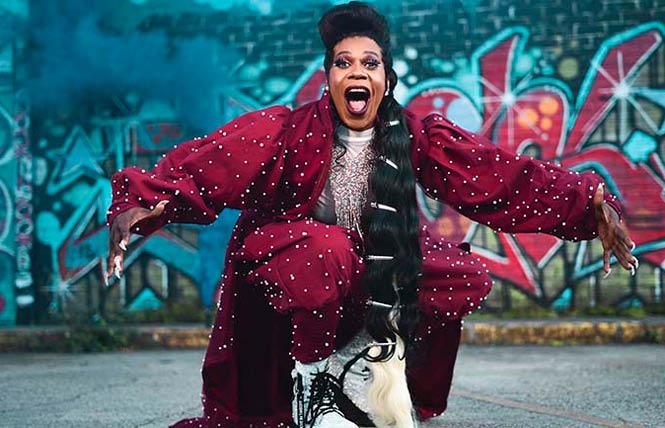 Big Freedia, the "Queen of Bounce," is famous for her music and dancing; her life story and anti-gun activism are less well known. She was shot twice in 2004, her brother was killed in 2018, and her cousin was killed many years earlier "over a 10-speed bike," she said.

She also narrowly escaped tragedy during Hurricane Katrina, rescued from her New Orleans rooftop in a neighbor's boat with four of her family members. Music, from gospel to bounce, has gotten Big Freedia through these and many other challenges.

The author, activist, and hip-hop artist who headlined San Francisco's 2020 virtual Pride celebration talks about her music, her life, her documentary "Freedia Got A Gun," and her memoir "Big Freedia: God Save the Queen Diva!"— recently re-issued in paperback — on this week's Out in the Bay. We hear plenty of her bounce music and she gives twerking tips, too.

As a teen, Freddie Ross Jr., was a choirboy, singing gospel in one of New Orleans' toughest neighborhoods. He confronted poverty, racism, homophobia, fat-phobia, and street violence on his road to becoming Big Freedia, ambassador of New Orleans Bounce, expanding queer visibility along the way.

She decided to use her platform as Big Freedia for positive change after her brother's killing. Her activism is chronicled in "Freedia Got A Gun." The film focuses on "the things that we need to do in New Orleans, and tries to get some of our local and national leaders' attention on what effect guns really have on people and their families and communities," said Big Freedia.

She tells Out in the Bay listeners that "lots of prayer" got her through 2020, including her own bout with COVID-19. She had been scheduled to tour with Kesha. She used the down time "to sit back, look at things from a different view, and come up with some really creative and catchy music" that she has recorded for a new EP to be released in May.

"Platinum," the first single from it, is "a song of inspiration and hope," said Freedia. "You can still shine bright, regardless of what you're going through." She's eager to perform it on tour: "When the world opens back up, I'll be making 'em shake some more ass!"

When she does, expect a "judge-free zone." She wants folks to "dance and twerk however they feel empowered ... It could be the worst twerk or it could be the best twerk," said Big Freedia. "We're still gonna all twerk and have a good time together."