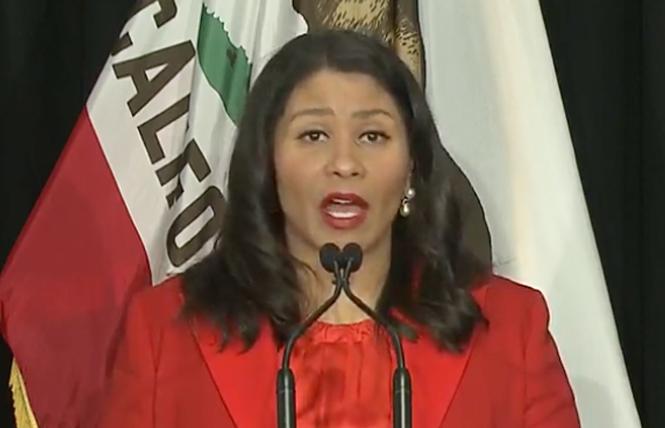 San Francisco Mayor London Breed should rescind her nomination of Christina Dikas for a seat on the Historic Preservation Commission. The panel, to which the Board of Supervisors just voted to appoint or reappoint three straight members, will have no LGBTQ people on it should Dikas' nomination be successful. We reported March 5 that Breed had nominated Dikas, an architectural historian and cultural resources planner, to the seat previously held by Jonathan Pearlman, a gay man whose term had expired. But there was another gay man serving on the commission, Aaron Hyland, whom Breed could have nominated to fill Pearlman's seat. Hyland's term has also now expired and he is no longer on the panel. Several community leaders had requested that she nominate Hyland to the vacancy. Late last month, Breed's spokesman told us that the mayor would take queer representation into consideration for this fourth spot. But that apparently did not happen.

The lack of LGBTQ representation on the Historic Preservation Commission comes as numerous queer historic issues are expected to go before the advisory panel in the coming months, from landmarking of LGBTQ historical sites to designating queer-owned legacy businesses. It is imperative that the community is represented on the body. It's unclear why the mayor chose to renominate the two straight members but not the two gay ones. It's also unclear why she could not find a qualified LGBTQ person for this last opening. Either way, it's a big blow to the community, which is striving for representation on city boards and commissions. The Board of Supervisors seems to understand this — it just approved three queer people of color for the Immigrant Rights Commission. (It names 11 people to that panel while the mayor gets to select four.)

The three members of the supervisors' powerful rules committee agree that an LGBTQ person is needed on the historic preservation panel. All three members, Chair Aaron Peskin, and Supervisors Rafael Mandelman and Connie Chan, told us they would oppose Dikas' nomination, which means that it would be forwarded to the full board with a negative recommendation.
Given the situation, the best move for the mayor would be to rescind the nomination and find a qualified LGBTQ person for the commission.

In other news, Breed did nominate Carol Isen, who is LGBTQ, to become the permanent director of the Department of Human Resources. We expect Isen to be confirmed by the Board of Supervisors as she seems to have broad support from organized labor and other groups. She has extensive experience in collective bargaining, which is key to the employee unions. She has also served as acting head of the department since last October.

It's disconcerting that the LGBTQ community has to constantly reiterate the need for queer representation on boards and commissions, and proves the need for ongoing organizing and participation in civic affairs. (Department heads are a different matter and the city is fortunate to have several out leaders.) It is through experience serving on advisory panels that people get involved in city government. When the mayor nominates only straight people, the LGBTQ community, and the city, lose out.

Editorial: Supes should reject Dikas for preservation panel
Sign up!