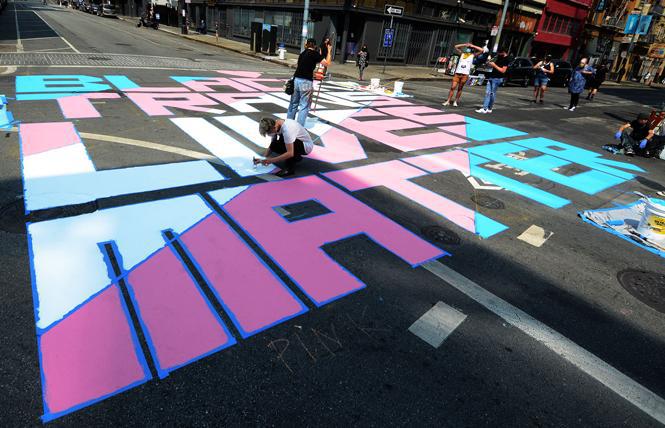 San Francisco will be redirecting $2.2 million from law enforcement to invest in Black-led and transgender-serving organizations over the next two years, according to a March 11 announcement from the office of Mayor London Breed and Sheryl Evans Davis, the executive director of the city's Human Rights Commission.

The funding is one part of Breed's Dream Keeper Initiative, which is reinvesting $120 million from law enforcement to the city's Black community over two years.

"With the Dream Keeper's significant investment in the Black community, we knew that it was critical to provide dedicated funding to address the unique needs in the Black transgender community," Breed stated in a news release. "I am committed to ensuring Black trans people can thrive in San Francisco and that organizations have the resources to deliver services that the community needs, which is why we are investing in the Black trans-led organizations that have been doing this work for years."

The Bay Area Reporter reported last December that city officials were seeking proposals for $1.6 million in grants for the trans community. Applications were due in January and awardees notified before they could start receiving grant funding February 1, running through January 31, 2023.

The city's HRC had opened up the process for both nonprofits and social service agencies to submit proposals for $1.375 million to be divided by three organizations.

But the March 11 announcement includes both more funding and more grant awardees than had originally been announced.

According to Sarah Owens, a deputy press director with the mayor's office, subsequent meetings with SF HRC led to a commitment that at least 5% of Dream Keeper Initiative funding would go toward the LGBTQ community, which led to additional funding for the Black-led and trans-serving organizations.

"As the funding amounts for the LGBTQ community increased, the city was able to offer awards to additional Black trans-serving organizations," Owens stated.

"The Transgender District is incredibly honored to help create high impact solutions toward the disparity that Black transgender people face in San Francisco," Aria Sa'id, a trans woman who is the executive director of the district, stated in the release. "While San Francisco is a premiere city for the acceptance of queer and transgender people, the data has not shifted over the last 30 years in regards to what we face including increased rate of homelessness, abject poverty and marginalization.

"We have a multi-pronged strategy to make immediate changes for our community that promote the empowerment of Black and Brown transgender people and include creation of innovative solutions to advance housing, economic advancement and cultural enrichment for and by our community," Sa'id added.