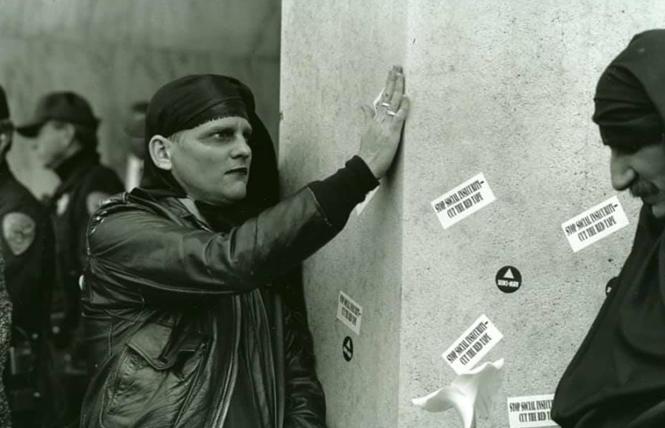 AIDS activist and longtime anti-imperialist organizer Tryfan Morys Eibhlyn Llwyd died March 3 in Louisville, Kentucky at the age of 70. Survivors said the death was due to natural causes, and not related to COVID-19.

When Llwyd, who identified as nonbinary or genderqueer, lived in San Francisco, they were one of the central figures in the emergence of militant AIDS activism in San Francisco, starting with the AIDS Action Pledge in 1986 (which became ACT UP/San Francisco in 1988), noted queer historian Gerard Koskovich.

Llwyd moved back to San Francisco (they had lived here for a time earlier) after testing positive for HIV in 1987 because there was a more supportive community for HIV-positive people, as well as a growing activist movement of which they quickly became a key part, according to their friends Margaret and Melinda Power.

Llwyd organized or participated in several high-profile protests and actions that helped bring HIV/AIDS to the attention of the public.

Waiyde Palmer, a queer man who was also part of the movement at the time, said in a phone interview that a 1987 protest at Burroughs Wellcome's West Coast headquarters was the first protest march of its kind, and "set the tone for what was to come."

Burroughs Wellcome was the company manufacturing AZT, the only HIV/AIDS treatment available at the time, and had set its price at thousands of dollars per month.

Protesters from AIDS Action Pledge and Citizens for Medical Justice "walked from San Francisco to Burlingame over a three-day period, staying at churches, and having teach-ins at each place to educate the community at large about what they were doing and why they were doing it," Palmer recalled.

When they got to the Burroughs Wellcome building in Burlingame, after failing to get inside, they climbed onto the roof of the building, eventually leading to seven arrests. It's unclear if Llwyd was among those arrested.

In 1989, when Llwyd was on the steering committee that put together the group Stop AIDS Now Or Else, they and about 80 other protesters blocked traffic on the Golden Gate Bridge, holding a banner reading, "AIDS Genocide; Silence Death; Fight Back." Later that year, the group disrupted the opening night of the San Francisco Opera season.

"That really lit the fire under a lot of people. It was very controversial," Palmer said. "At the time, the opening of the San Francisco Opera was on par with the Oscars."

In 1990, ACT UP/San Francisco joined other ACT UP chapters from around the country to protest at a meeting of the American Medical Association in Chicago.

Research assistant
At the same time, Llwyd was working as a research assistant at the UCSF Center for AIDS Prevention Studies. Susan Kegeles, an ally and emeritus professor of medicine, recalled that they were "a really thoughtful analytical contrarian" who wasn't afraid to speak out.

After the first antibody tests for HIV became available, Kegeles published research saying that many gay men weren't planning to tell their partners about their status if they tested positive.

She recalled Llwyd pulling her aside to say, "You really have to think through the implications of how you interpret your research findings." The concern proved to be well-founded, she said.

"I started getting some people thinking that this meant that gay men were going to be doing terrible things, they would contract it, and wouldn't tell their sex partners, and isn't this terrible," recalled Kegeles.

She took the advice and in follow-up research, highlighted the intense stigma that led people to hide their status, not just from partners, but from everyone they knew.

"After that, I did a lot of interviews about this story. And I then was talking about the stigma of living with HIV and how you had to hide it from everybody," Kegeles said. That lesson about being careful about possible implications of published research stuck with her, and she passed it on to many other scholars.

Terry Beswick, a gay man and executive director of the GLBT Historical Society, wrote in a Facebook post that Llwyd was "a deeply principled warrior in the ACT UP San Francisco mold, steadfast in their resolve to draw connections between fighting AIDS and racism, sexism, classism, ableism, and other social justice movements."

In a phone interview, Beswick added that Llwyd was a little older than many other members and had activism experience from the 1970s, which made them a mentor to many people and "the moral compass of ACT UP."

Sean McShee, a gay man who met Llwyd in the mid-to-late 1970s, said San Francisco's gay culture at the time was split between the "clones" who were seen as reformist Democrats or assimilationists, and "freaks" who tended to be ex-hippies and "cultural radicals as well as more hardline political radicals." Llwyd fell on the "freak" side of that split, McShee said, but also had a great sense of humor. He recalled Llwyd describing a man they'd slept with, saying, "The only thing we had in common is that we were both in love with his body."

Margaret Power, who first met Llwyd in the anti-imperialist Prairie Fire Organizing Committee, said they were often effective at keeping political disagreements within an organization in check. "Tryfan really always kept pushing people to keep sight of the larger picture: 'What is our overall goal here? Let's work things out. Let's promote unity,'" she said. "That was one of their major strengths."

In 1990, Llwyd became the third national coordinator of ACT NOW (the AIDS Coalition to Network Organize and Win), a coalition of ACT UP chapters and other groups around the country.

Llwyd announced their new name on Facebook last November where they wrote that they now identified as a "nonbinary or genderqueer member of the transgender community."

"I have been on this journey since I was 7 years old," Llwyd wrote.

They also wrote that they were keeping the Facebook page for Arawn Eibhlyn Lloyd, their previous name, "because I am not ready to give him up." It was under that name that they were known during their San Francisco activism days. Their name changes were in recognition of their Welsh ancestry, they wrote.

Beswick said the GLBT Historical Society's collection of Llwyd's papers will be renamed soon, though anyone searching for them under their old name will still be able to find them.

After losing their mother to suicide at 8 years old, they were raised by their aunt and uncle in Kentucky. They studied English literature at the University of Kentucky, and shortly thereafter moved to San Diego, California, then to San Francisco, where they connected with the gay liberation movement of the 1970s. They also spent a few years teaching English as a second language, both in Japan and in San Francisco.

Llwyd moved to Chicago in the mid-1980s and took the Central American Pledge of Resistance, a pledge of opposition to U.S. intervention in Central America. They were also active in supporting Puerto Rican political prisoners, and the John Brown Anti-Klan Committee. Margaret Power said that Llwyd's lifelong commitment to anti-racism was probably a response to the casual racism they witnessed from their family while growing up in Kentucky.

Llwyd moved back to Kentucky when their aunt who raised them became sick, around 2000. While living there, they became a Buddhist and studied at the Furnace Mountain Zen Center, as well as doing a lot of personal writing.

Llwyd is survived by their brother Jim Jeffries, 72, of West Valley City, Utah; and two cats, Bernie and Widget.

Friends are working on organizing an online memorial service in the coming weeks, and hope to have one in person in Kentucky later in the year if COVID-19 restrictions allow.