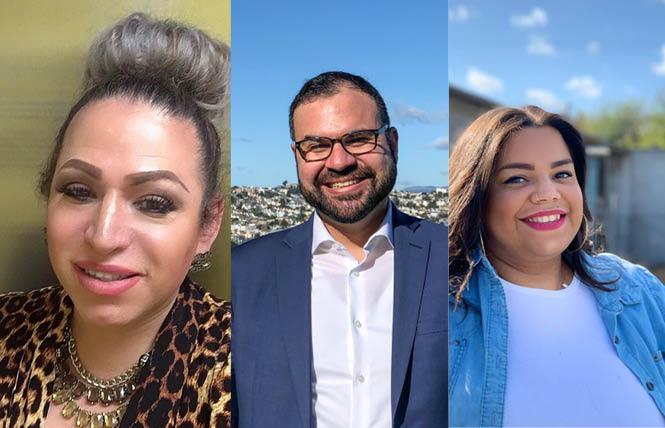 Three LGBTQ community leaders have won appointment to San Francisco's Immigrant Rights Commission, helping to double queer representation on the civic advisory body. At its March 9 meeting, the Board of Supervisors unanimously voted 11-0 to seat the trio of out applicants along with three straight people seeking to be reappointed.

Commissioner Jessy Ruiz Navarro, who is originally from Mexico and the advisory body's lone transgender member, secured her reappointment. When she joined in 2019 Navarro was the panel's first commissioner whose primary language isn't English.

Joining the commission is artist Lucia Obregon Matzer, a queer immigrant from Guatemala who became a U.S. citizen four years ago, and gay Walnut Creek resident Luis Zamora, who works in San Francisco as a facilities supervisor at law firm Morgan Lewis & Brockus LLP and is the current public policy chair for the Golden Gate Business Association, the country's oldest LGBTQ chamber of commerce.

Matzer is the community leadership development manager at the Mission Economic Development Agency, while Navarro works for the Mission Neighborhood Resource Center. They join gay Filipino American Franklin M. Ricarte on the commission.

The supervisors also seated on a 10-0 vote Sarah Souza, an administrative aide to District 3 Supervisor Aaron Peskin, to the advisory panel. The Brazilian immigrant is the first DACA participant to be seated as a city commissioner.

Peskin recused himself from voting on Souza but voted for the other applicants. He had fully recused himself when the rules committee, which he chairs, took up all of the appointments.

Gay District 8 Supervisor Rafael Mandelman, who is vice chair of rules, and District 1 Supervisor Connie Chan had recommended to their colleagues which of the eight applicants should be named to the seven seats currently available on the 15-member immigrant rights commission. (The board names 11 people to it; the mayor appoints the other four.)

They also suggested three of its current commissioners — Haregu Gaime, Ryan Khojasteh, and Elahe Enssani — be reappointed. Gaime, a naturalized citizen from Eritrea, is an immigration attorney. Khojasteh, a San Francisco assistant district attorney, is the son of Iranian immigrants, while Enssani is a SF State professor who was born in Tehran, Iran.

White House key to Milk national monument
For the former location of the late gay supervisor Harvey Milk's camera store and residence in San Francisco's LGBTQ Castro district to become a national park site, the Biden-Harris administration will be key. Either President Joe Biden or a President Kamala Harris, should the vice president succeed her governing partner, could sign off on making the property at 575 Castro Street a federal landmark.

As the Bay Area Reporter's Political Notes online column first reported March 5, the National Parks Conservation Association is interested in acquiring the site in order to preserve it in perpetuity. The idea is to designate it as a national monument, akin to the Stonewall National Monument in New York City.

It encompasses Christopher Park in front of the gay bar the Stonewall Inn, a national historic landmark where patrons rioted against police harassment in 1969. While the site of Milk's Castro Camera store is a San Francisco city landmark, it currently does not have any federal recognition for its importance to LGBTQ history.

Representatives for the parks association and the LLC that owns the property where Milk waged his campaigns for political office in the 1970s declined to provide details about their plans for the property when contacted by the B.A.R. Mandelman acknowledged he had recently met with the national nonprofit and the local GLBT Historical Society about their idea for creating a Milk national monument.

What is known is the Human Rights Campaign, which has operated a store and action center at 575 Castro Street since 2011, will move out of the historic storefront by the end of April as its lease was not renewed. The national LGBTQ rights organization has had a store in the Castro for 16 years.

For years LGBTQ preservations have talked about the possibility of seeing the Milk site become an anchor for a federal LGBTQ historical district in the Castro that could one day include other significant properties in the neighborhood. The LLC owns the Milk site and the building next door at 565 Castro Street, which houses Hand Job Nail & Spa. Both buildings have residential units about the storefronts, and an open-air parking lot spans the rear section of the two properties.

It is conceivable of seeing a deal hammered out where the LLC, whose manager is James Nunemacher, the founder and CEO of Vanguard Properties, offers the building where Milk worked and lived as a national park site in exchange for being allowed to build a denser mixed-use development on the rest of the site. Or both properties could be acquired by preservationists to be used as a visitors' center and museum to tell the story of Milk, the first gay person elected to public office in California, and the role the Castro neighborhood has played in LGBTQ history.

For anything to happen while Biden is in office, the president will need to be supportive of the plan as he has the authority to establish national monuments under the Antiquities Act. (Congress can also pass legislation establishing monuments but the process is usually politically complicated.)

"There are a lot of steps that have to be figured out. We will also need to engage the president on the project and really call on him to take this step in recognition of LGBTQ history more broadly but more specifically for Harvey Milk and his contributions," said Terry Beswick, executive director of the GLBT Historical Society. "We are kind of hoping the vice president will be an ally on this too because of her connections to San Francisco."

Harris, who recently sold her loft-style condo South of Market, had served as the city's first female district attorney in the 2000s.

Web Extra: For more queer political news, be sure to check http://www.ebar.com Monday mornings for Political Notes, the notebook's online companion. This week's column reported on the potential plans for the Harvey Milk historic site.