Out in the World: Binational gay couple reunited in San Francisco 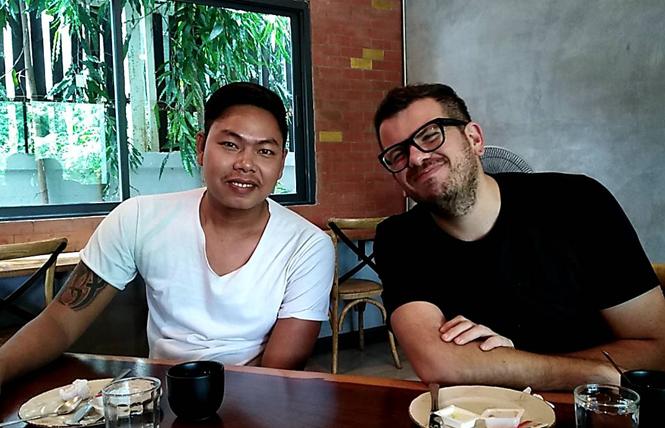 A binational couple who was separated due to the coup in Myanmar has been reunited in San Francisco.

For two years, Kenny Kruse worked to get his fiancé, Yar Zar Min, a visa to come to the U.S. The couple waited through delays caused by the previous administration and extension of the travel ban that included Myanmar. Last year, the global coronavirus pandemic kept them separated.

Then, on February 1, a military coup took place in Myanmar.

Kruse still cannot believe he and his partner are together at last.

"It still feels so surreal," he told the Bay Area Reporter March 1. "I just feel like shocked that he's here because we've been waiting for so long."

The bliss of being together, however, is overshadowed by what is happening in Myanmar and the process of getting Yar Zar Min settled in the U.S.

It is more than what Kruse can afford. Getting Yar Zar Min to the U.S. cost thousands of dollars, some of which he hopes is refunded, and the process to get his green card and work permit with a lawyer's assistance will cost thousands more.

Yar Zar Min will not be able to work for possibly nine months, Kruse said, adding that his fiancé supported his family.

"We can't fully enjoy it because all these terrible things are happening in Myanmar," said Kruse, explaining that every evening and morning they are on the phone with friends and family in the country.

Yar Zar Min had reservations about leaving his friends, family, and community behind during the coup, but a plan to continue supporting Myanmar's LGBTQ community from afar alleviated his concerns, the couple said.

"We want to work for LGBT in Myanmar," said Yar Zar Min.

Met in 2016
Kruse, 35, was working preparing teachers and students to study abroad in Mandalay, Myanmar for a year in 2016. He met Yar Zar Min, 32, on Grindr six months into his assignment.

To continue their relationship, Kruse got assignments in Cambodia and Thailand for the next year and a half to make it easier for them to visit each other, but getting travel visas for Yar Zar Min was not easy.

Kruse applied for a fiancé visa for Yar Zar Min in 2018. In 2019, he returned to the United States, temporarily living with his family until he moved to San Francisco.

Three days before the coup, the couple was elated. Yar Zar Min's fiancé visa was approved January 29. He could come to the U.S.

Amidst their excitement they were aware something was about to happen in the country, but they did not know what or when it was going to happen.

"One of our friends was telling us, 'You have to go as soon as you get the visa,'" Kruse said. "The military is planning something."

Even with the warning, the two men were caught off guard.

In the morning February 1 in Myanmar the military took over. Kruse, a high school teacher in San Francisco, watched the news unfold while Yar Zar Min, who worked for a children's nonprofit organization, slept in Yangon.

Yar Zar Min awoke to a new reality in Myanmar with no way to contact Kruse or any of his friends or family for five hours.

Kruse tried frantically to contact Yar Zar Min and their friends, but the military had shut down all communications.

"I felt really helpless," Kruse said, who constantly checked service to see if it resumed in Myanmar.

He also began contacting politicians and diplomats and working with the U.S. embassy in Myanmar to get Yar Zar Min to San Francisco.

As soon as he saw connections coming back online, he made contact.

"I told them about the coup. They didn't know yet," said Kruse about his friends in Myanmar. He eventually connected with his fiancé.

Rainbow uprising
Yar Zar Min, who was not political before the coup, joined some of his friends defying the military's restrictions placed on gatherings of more than four people.

When people started disappearing in the middle of the night, he joined his neighborhood watch, patrolling and ready to sound the alarm at any sign of the military.

It was dangerous. A neighbor, who also volunteered for the neighborhood watch, was shot and killed by the military, Kruse said.

Kruse feared for Yar Zar Min's safety and his ability to finally join him in the U.S.

"It made me feel better having friends there and knowing everyone was doing it," he said.

Yar Zar Min was one of many LGBTQs who were on the frontlines of Myanmar's pro-democracy demonstrations proudly donning drag, waving rainbow flags, and dishing out snappy, attention-grabbing chants against the military takeover.

It is a different time from 30 years ago when a small group of pro-democracy LGBTQ student protesters, including Aung Myo Min, executive director of Equality Myanmar, joined the movement in 1988.

"They were not that obvious," Aung Myo Min told the B.A.R. last month on a secure calling app to avoid the military monitoring conversations about the conservative Buddhist-majority country's attitudes toward gay people. "The social pressure was so strong."

The 53-year-old gay human rights leader lost his boyfriend, a fellow resistance soldier, when he was sent to the frontlines to prove his manhood and was ultimately killed.

Aung Myo Min lived in exile in Thailand for nearly 25 years before returning to Myanmar in 2015. He credits decades of human rights work and empowerment of LGBTQ people that is now in action on Myanmar's city streets.

He is proud to see a new generation of "brave" LGBTQ activists identify themselves in the struggle for democracy.

"This is really good to see the LGBT flags are flying and joining the struggle for democracy with other public people," said Aung Myo Min, proudly stating that in every city in Myanmar LGBTQ people are at the front of pro-democracy demonstrations.

Yar Zar Min said, "I feel very proud of them." 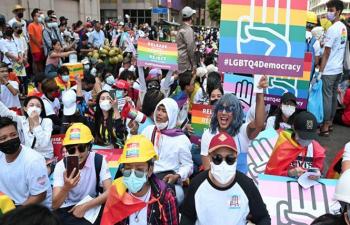 Myanmar's LGBTQ and ethnic groups were out on the streets Saturday, February 27, to protest against the military junta. Photo: Courtesy Reuters

Decade of free expression
A decade of democracy, the internet, and social media has brought small gains for Myanmar's LGBTQ community. The community grew more visible with Pride and other queer events, more LGBTQ organizations emerging, and opportunities to create community.

The events went on despite homosexuality remaining criminalized under the British colonial-era law, Section 377, among other anti-gay laws. Individuals found guilty face up to 10 years in prison.

The law is rarely enforced, but authorities use it to harass LGBTQ people.

Kruse, who briefly worked for a local LGBTQ organization in Mandalay in 2016, witnessed the harassment.

"The police would regularly call the office and start harassing the directors," he said. "They would be like, 'Shut up and leave us alone.'"

The National League of Democracy Party pledged to repeal the law, along with other anti-gay laws, this term during its reelection campaign.

Kruse's friends were not as brazen when he contacted them at the organization after the coup, informing them of American news reports that the military was arresting politicians, journalists, and activists.

State Counsellor Aung San Suu Kyi, 75, and key members of the ruling National League of Democracy Party, were arrested by the military.

NLD won 396 out of 476 seats in November's election, overwhelmingly winning a second term in the country's second free democratic election.

The military's proxy party, the Union Solidarity and Development Party, won only 33 seats.

Aung San Suu Kyi, a Nobel Peace laureate and human rights defender who famously was under house arrest for nearly 15 years, was charged with alleged election fraud, as were other government leaders.

The military announced new elections would be held and power will be handed over to the winner. A new election date has not been set.

Memories of those dark days and the military taking people out of their homes in the middle of the night is what drove Yar Zar Min out onto the streets as the protests grew more violent and deadly.

"[The military] just do anything that they want at any time. There is no law for them. We are not safe," said Yar Zar Min.

"I'm scared, but I have to protest," he continued. "Living in the military is more scary for me."

Nearly 550 demonstrators have been arrested by Myanmar's Assistance Association for Political Prisoners. Only 46 have been released as of February 19, Al Jazeera reported.

A transgender woman was one of the protesters arrested recently, Aung Myo Min said.

Dozens of protesters have been seriously injured two weekends in a row. The police have used riot control tactics firing rubber bullets to break up crowds on several occasions as well as water cannons and catapults on demonstrators.

The U.S. and the United Nations swiftly condemned the coup, along with the United Kingdom, Canada, New Zealand, India, and Japan.

Myanmar's own Ambassador to the U.N., Kyaw Moe Tun, denounced the military coup before the U.N. February 26, according to a news release from the international body that same day.

On edge
Yar Zar Min started talking to the media while he was in Myanmar. The San Francisco Chronicle published an article February 17.

At the time, he had a plane ticket to come to the states for February 24. The ticket was suddenly canceled.

The two men became worried, so many personal details about Yar Zar Min's life were being published.

"It no longer seemed like he was going to be leaving anytime soon," said Kruse.

Alarmed, Kruse kept working with the U.S. embassy to get Yar Zar Min on an evacuation flight. That did not work. The flights were full. Kruse finally got a flight and expedited Yar Zar Min's COVID test.

"It feels like a year," Kruse said about February.