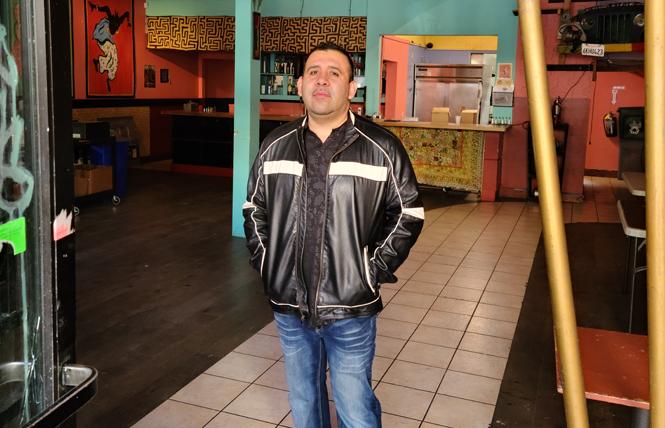 A well-known gay nightlife promoter in the East Bay who went into the restaurant business last year is opening a new nightclub and eatery in downtown Oakland. It will be the second LGBTQ nightlife venue in the heart of the city, and a third such business could also join the mix later this year.

Valentino Carrillo, who opened La Frontera Mexican Restaurant in East Oakland last winter, is taking over the lease at 381 15th Street where the Senegalese restaurant and dance club Bissap Baobab Oakland had been operating. Owner Marco Senghor announced in December he had decided to shutter the business.

By March 10 Carrillo expects to close escrow on the business and has already applied to transfer the liquor license into his name. The new business will be called Que Rico Nightclub and Restaurant, and its lease runs through 2029, with an option to renew for five years.

"It is actually pretty exciting," Carrillo told the Bay Area Reporter. "I definitely have been doing this 15-plus years, so I am glad I can finally make it happen."

At first just the eatery will open, serving Mexican cuisine like quesabirrias and fish tacos, as well as hamburgers and hot wings. Later this year when the COVID pandemic subsides, Carrillo will begin hosting events and dance clubs at the location.

"It is move-in ready," Carrillo said of the space. "But I do plan over the next few months on doing some slight modifications and changes to give it more of a nightclub-type feel."

As the B.A.R.'s February 11 Business Briefing column noted, Carrillo opened his first restaurant last year as a way to finance his long-held dream of owning and operating his own nightclub in Oakland. Carrillo, who is in his late 30s, grew up in Sacramento and moved to the Bay Area in 2003.

Under the persona of Valentino Presents, Carrillo has managed DJs, drag performers, go-go dancers, and other nightlife entertainment for much of his time in the East Bay. He also hosted dance parties under the Que Rico name at various local venues.

Carrillo was also the operations and marketing director at the now-defunct gay nightclub Club 21 in downtown Oakland. But he resigned in May 2019 due to issues he had with the new owners, said Carrillo.

Shortly thereafter the gay couple that owns Oakland's the Port Bar, Sean Sullivan and Richard Fuentes, reached out to Carrillo to invite him to throw his parties at their location. The three have been friends for years, and Carrillo designed campaign posters for Sullivan and Fuentes when they ran for public office years ago.

Carrillo not only has supported their own bar, he has consistently been there for the performers they book, noted Sullivan. And having a nightlife venue that caters to the local LGBTQ Latinx community is a major win for Oakland, added Sullivan.

"He has such a huge following in the community that went to his events and just has such respect for him," said Sullivan. "They know that he cares about his queer, migrant, Latinx community. He knows what kind of entertainment they want."

The trio is looking forward to promoting downtown Oakland as an LGBTQ nightlife destination to East Bay residents who would prefer not to have to drive to San Francisco's Castro district. The Port Bar routinely hit its capacity of 115 people prior to COVID, said Sullivan.

"We are bullish on it. We believe very much, regardless of the people moving in and moving out of Oakland, there has been such a need for more queer spaces," said Sullivan. "Our greatest competition has been the Castro. If we had more queer spaces within the footprint of the Port Bar, I know based on talking to customers for nearly the last five years they would not go to San Francisco as readily."

Carrillo said his Que Rico "will help keep a lot of people in Oakland too, especially the LGBTQ community. It will give them more things to do in Oakland."

Sullivan and Fuentes have been looking to open a second queer nightlife venue in downtown Oakland. They had begun to inquire about possible locations until the health crisis last year upended how nightlife spots could operate.

"We have long wanted the neighborhood to be its true queer self and have a broad queer experience here," said Sullivan, whose bar is five short blocks from Carrillo's new establishment. "The challenge there was the high cost of everything. We are still looking to do it. When the pandemic is more closer to ending, we will then continue to look for spaces and see how the landscape looks." 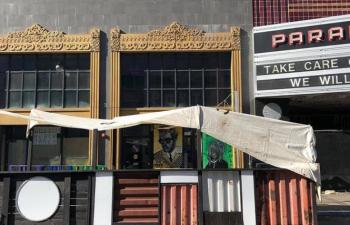 The Port Bar's parklet is on Broadway next to the Paramount Theatre. Photo: Courtesy Facebook

For now, the Port Bar is able to accommodate about 40 patrons at a time with its sidewalk tables and parklet two of its customers, Cameron Kephart and David Davila, built for it. It has teamed with Shiloh Cuisine, a food truck that serves Yucatan-style Mexican cuisine.

It is once again offering drag brunch on the weekend and drag shows Wednesday nights at 9, 10, and 11 p.m. The Port Bar is currently open 5 p.m. to midnight Tuesday through Thursday; 3 p.m. to midnight Fridays and Saturdays; and 11 a.m. to 8 p.m. Sundays.

At some point Carrillo also hopes to offer drag dinner shows at Que Rico and drag brunches. The 2,500 square foot location has two rooms that can convert from dining areas into a nightclub; he is still waiting to learn from the city what the capacity will be.

Carrillo is looking to hire bartenders, cooks, preps, and wait staff for the new restaurant. Que Rico's hours will initially be from 4 p.m. to midnight Thursdays through Sundays and expand as business grows. He expects once the nightclub opens dinner service on event nights will end at 8:30 p.m. with the nightclub open from 9 p.m. to 2 a.m.

"The restaurant itself will start taking orders for takeout and delivery around mid-March," said Carrillo. "We hope to be able to open at least for outdoor dining and possibly indoor dining if allowed to by the beginning of April."