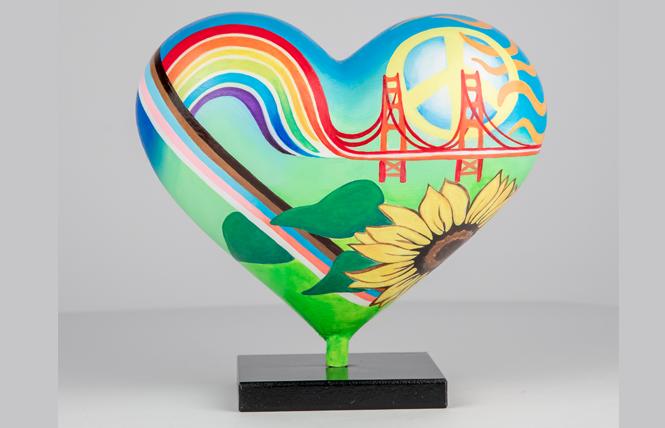 A free virtual event was held February 11 honoring three health equity programs at SFGH. Proceeds from the event were generated by bidding on the hearts. The Hearts program, produced by the San Francisco General Hospital Foundation, has raised nearly $34 million since its inception in 2004.

During the event essential workers on the frontline of care were honored and three SFGH programs were highlighted: Empowered by Heart SF, which is a series of San Francisco-based events geared toward improving heart health through wellness workshops, neighborhood celebrations, and conversations around education and prevention of heart disease; Richard H. Fine People's Clinic, one of the first outpatient clinics at a public hospital; and Solid Start, which promotes integrated care coordination for all pregnant people, children, and families.

As the Bay Area Reporter noted in a February article, two of the artists this year were members of the LGBTQ community: Kaytea Petro, who is bisexual, and Daniel Dallabrida, a gay man who has lived with HIV for 30 years.

Select Heart sculptures from the public art project are on display in San Francisco's Union Square through October.

Video portraits running on SF City Hall
A temporary video installation is running on the facade of San Francisco City Hall this week and honors members of the Glide Memorial Church community.

"We the People" by artist Jock McDonald is shown on the Dr. Carlton B. Goodlett Place side of City Hall from 6:30 to 9:30 p.m. nightly through Sunday, March 7. It is composed of San Franciscans' portraits morphing and blending from one individual into another and aims to heal division, illuminate connectedness, and inspire people through shared humanity, according to a news release from the San Francisco Arts Commission, which is overseeing the project.

Named for the preamble to the U.S. Constitution, "We the People" is a reminder of the new Biden-Harris administration that took the oath of office just weeks ago promoting values of diversity and equity, and that has since populated cabinet and senior-level positions that manifest the goals of pluralism and inclusivity represented in the nation's leadership.

The faces portrayed also embody a sense of pluralism and feature community members of project partner Glide — BIPOC and LGBTQ individuals too rarely visible in public art. The artwork aligns with Glide's mission: founded in 1929 to serve all people, and revived in 1963 to welcome "the diverse community of poor and marginalized people of the Tenderloin," the release states.
"It is my desire to throw visual emotional weight on our shared humanity and create empathy through the use of 'the eyes are the window to the soul,'" stated McDonald, who was born in Vancouver and opened his art studio in San Francisco in 1986.

The Rev. Marvin K. White of Glide stated, "In the middle of the COVID-19 pandemic, when we were displaced and isolated, Jock McDonald invited us to come out and be seen. Jock invited us to be photographed and to go on record as being part of a beloved community called Glide Memorial Church."

"We need art like this," he stated. "We hold these truths to be self-evident that all people are created equal. There's a profound sense of humanity in Jock's work, a visual reminder that there's very little that separates us, and that we're all connected and valued."

McDonald is a self-taught photographer whose work has achieved national and international acclaim. His last project, "Light of Water," was shown at San Francisco International Airport in 2019.

The trust will award $1 million in grants to 25 historic restaurants throughout the United States to help improve, upgrade, and preserve their exterior physical spaces and online businesses. The program has a preference for restaurants owned by underrepresented groups, including people of color and women, disproportionately impacted by the pandemic.

The program also looks to help eateries that have not received significant COVID-19-related aid, a news release stated.

People can participate by nominating cozy cafes, delicious dives, and other beloved restaurants that have stood the test of time and served their communities for decades — but now are facing their biggest challenge yet from the COVID-19 pandemic. Restaurant owners and restaurant lovers alike are encouraged to nominate their favorite business(es) for this opportunity by Tuesday, March 9.

For details on the program, go to https://bit.ly/3c5tfg7

Equity is achieved when the unique needs of the diverse bi+ community have been met, and discrimination against BIPOC, transgender, and disabled members of the bi+ community has been eliminated, according to a news release from the center. The bisexual+ community makes up the majority of the LGBTQ+ community and experiences significantly higher rates of physical, sexual, social, and emotional violence and disparities than gay and straight people, as well as worse physical, mental, and social health. These health disparities are even worse for bi+ people of color and trans people.

"Although bisexual+ people are the majority of the LGBTQ+ community, we don't benefit from the same research, resources, or attention as our gay or straight peers," stated Belle Haggett Silverman, president of the Bisexual Resource Center. "At work, at school, and at the doctor's office, our needs are often overlooked, creating serious challenges to our health and well-being. This year, #BiHealthMonth invites our supporters to help us build a healthier, happier, and more equitable future for everyone in our diverse bisexual+ community."

Throughout March, the center will partner with various organizations, including #StillBisexual, AIDS United, the National LGBTQ Task Force, and CenterLink, the community of LGBTQ centers, to name just a few.

"The civil grand jury offers the opportunity to contribute to our community by examining city government to identify efficiencies, to suggest reforms, or to highlight things that are not working well," she stated in a news release.

The upcoming term runs from July 1 to June 30, 2022. The civil grand jury usually meets once a week, with additional meetings and interviews scheduled as necessary.

The deadline to apply is Friday, May 14. A court spokesman said that the grand jury meetings continue to be conducted virtually.

For more information and to apply, go to https://civilgrandjury.sfgov.org/