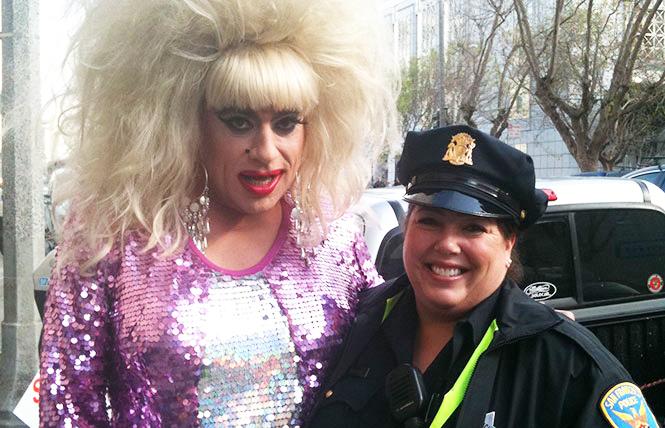 The San Francisco Police Department's Mission Station, which also covers much of the Castro and Noe Valley, has a new head in Captain Rachel Moran.

A 25-year veteran of the force, Moran, 50, told the Bay Area Reporter February 22 that she thinks she's the first woman to lead the station, which was subsequently confirmed by Matt Dorsey, a gay man who is the communications director of the SFPD.

Mission Station is Moran's "home away from home," she said.

"I was an officer at Mission Station for approximately 10 years," Moran said. "I was a lieutenant for 21 months, moved to SVU for a year and a half and now I'm back. As far as having a home in the department, Mission Station is home for me."

Moran said that while she is not LGBTQ herself, "you can't work at Mission Station without being an ally."

"There's so much I hope to accomplish, but specifically with the LGBT community — keeping that clear line of communication open," Moran said. "That's huge. I want to encourage anyone to report hate crimes, and hate-related crimes."

SFPD Chief William Scott told the B.A.R. the same day that he hopes people have confidence in Moran.

"A lot of thought got put into who got placed where," Scott said. "Rachel Moran is the real deal in terms of work ethic and community engagement. I am confident."

Scott said that two of the 10 SFPD stations are led by women.

Gay District 8 Supervisor Rafael Mandelman told the B.A.R. that he enjoyed working with Caltagirone, whose tenure he noted was longer than usual, but understands the department often shifts captains around to other districts. He plans to soon meet with Moran, as he is not familiar with her.

"She has a lot of work cut out for her, with the increasing property crimes and street conditions in the Castro and drug use in the Castro," said Mandelman. "We have a lot to work together on."

Caltagirone became the head of Richmond Station effective on February 20 — replacing Lieutenant Bill Conley, who'd been serving in an interim capacity since the retirement of Captain Michelle Jean — according to a news release from District 1 Supervisor Connie Chan's office.

Chan joined Scott in making the announcement of a change in leadership at Richmond Station February 19.

"Constantly reevaluating personnel assignments to meet department and community needs enables us to better serve residents while expanding opportunities for our members to pursue new professional challenges and more fully serve San Francisco's rich diversity," Scott stated in the release. "Richmond Station will be the eighth of SFPD's 10 police districts to benefit from Gaetano Caltagirone's leadership, and the appointment of such an accomplished veteran comes at an important moment for Richmond district neighbors and businesses."

Scott went on to state that crime has risen in Westside neighborhoods like the Richmond district since the beginning of the COVID-19 pandemic last spring, which emptied out dense neighborhoods downtown.

"The COVID-19 pandemic and lockdown has disproportionately shifted property crimes into residential areas, and we know the Richmond district is bearing the brunt of it right now," Scott stated. "Reversing the recent trend in burglaries is a top priority I share with Supervisor Connie Chan, and I know we both look forward to working closely with Captain Caltagirone and Richmond district community members to make our neighborhoods safer."

Scott told the B.A.R. that a recent round of promotions also led to the moves in the department.

"Anytime there's a promotion, movement, or retirement, we have to address where we are, what the needs are and match up the skill sets where the need is," he said. "We also need to give people experiences to broaden horizons. To be honest, the comfortable thing to do is to leave people in place, but that's not the best thing to do for the organization or for the city because we have to give people room to grow."

Chan stated her excitement to work with Caltagirone for the betterment of the Richmond district.

"We welcome Captain Caltagirone to the Richmond district and look forward to working with him and the entire Richmond district police station to keep our communities involved in increasing safety in our neighborhoods," Chan stated. "We have been lucky to have acting Captain Bill Conley during a very trying time and thank him for his service. We look forward to continuing that active community response and engagement with Captain Caltagirone."

Caltagirone was in charge of Mission Station when a nonbinary police officer there was reprimanded for wearing earrings on the job.

On June 4, a day after Officer Rubin Rhodes took a knee in front of Mission Station in solidarity with protesters demanding justice for African Americans killed by police officers, Rhodes was sent home for insubordination reportedly for wearing earrings.

The transphobic dress code policy was changed in December, as the Bay Area Reporter previously reported.

The SFPD's shuffling of captains was first reported by Mission Local.