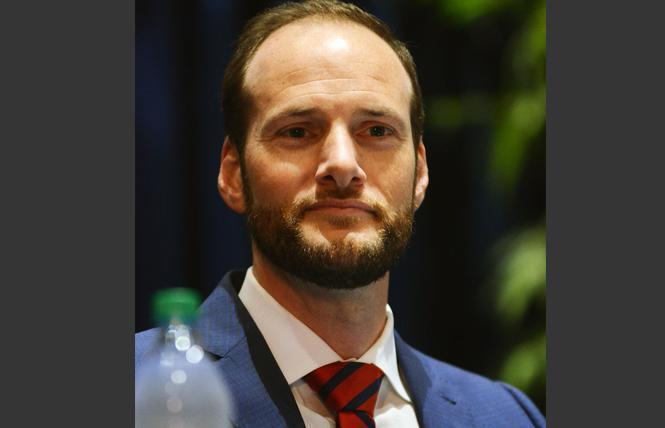 A group of residents has started the process to recall San Francisco District Attorney Chesa Boudin.

Approval of the signature-gathering phase of the effort is likely to come in the next week, according to the recall's lead organizer.

As the Bay Area Reporter previously reported, Richie Greenberg, a business adviser and activist who in 2018 was a Republican candidate for mayor, started a petition January 2 urging Boudin to resign after a parolee was allegedly responsible for a hit-and-run that killed two pedestrians in the South of Market neighborhood on New Year's Eve.

"We decided to stop the petition and declare that this is a much bigger response than we could have imagined," Greenberg told the B.A.R. February 23. "We need a recall effort."

Greenberg said that, subsequently, the Committee Supporting the Recall of District Attorney Chesa Boudin was formed and 29 individuals signed a "notice of intent laying out the allegations against Chesa and laying the groundwork for a recall."

The notice of intention was filed on February 8, Greenberg said.

Boudin received the notice of intent and responded, and now the recall effort is seeking final approval from the San Francisco Department of Elections before it can proceed with signature gathering, which Greenberg said is likely within the next week.

The elections department is awaiting proof of publication and two blank copies of the petition, a spokesperson told the B.A.R.

"Once the petition format is approved, the proponents may begin circulating the petition," Matthew Selby, the campaign services division manager with the elections department, stated. "Therefore, the department cannot confirm when the circulation of the petition will begin."

Boudin did not respond to a request for comment.

According to a recall guide issued by the city in 2010, "valid signatures of at least 10% of registered voters of the City and County at the time the proponent(s) filed the notice of intention" are required to qualify the recall for the ballot. According to Selby, that threshold in this effort is 51,324.

The substance of the allegations for why Boudin deserves to be removed from office is available on the recall effort's website in a section titled "Grounds for Recall." (The notice will also be published in this week's print edition of the B.A.R.)

"These grounds are: Dereliction of duties; malfeasance; egregious waste of taxpayers' funds to the tune of nearly $400,000/annual compensation; fostering or exacerbating a culture of privileged, incendiary and politicized rhetoric towards the public; distorting of criminal justice data; implementation of a theoretical system of criminal justice which instead agitates and upends our neighborhoods causing crime spikes in every corner of our city," the section states. "By definition, the public entrusts a District Attorney to prosecute criminals, yet instead every resident, small business owner and visitor to San Francisco has now become a criminal's target, and with near impunity."

Greenberg said that the grounds focus more on a pattern of behavior than a specific incident.

"That's the unfortunate part," he said. "As long as Mr. Boudin and his philosophy continue, the body count will pile up higher."

Boudin won election in 2019 and is one of several reform-minded DAs elected in cities across the country. But he has come under criticism from some residents who complain that his restorative justice policies do not protect them.

A citywide recall effort differs from a statewide one in that there would not be a simultaneous election of Boudin's replacement. Instead the mayor would appoint a new district attorney if Boudin were to be recalled. (Efforts are also underway to recall three members of the San Francisco school board over several missteps in recent weeks and the fact that the city's public schools remain closed to in-person learning.)

Mayor London Breed's office did not respond to a request for comment. In the 2019 election for district attorney Breed had endorsed the more moderate candidate, Suzy Loftus, whom she had appointed as interim DA a few weeks prior to Election Day.

When asked if he has confidence that Breed, who like Boudin is a Democrat, would appoint someone better, Greenberg responded that he's OK "as long as London Breed gets the choice." He added he hopes she is not appointed to a higher position, which may lead to a "radical leftist" from the Board of Supervisors being named interim mayor and getting to decide who should fill the DA vacancy should Boudin be recalled.

"We're banking on the high probability that London Breed will still be mayor," Greenberg said. "The sooner we are able to get him out, the better. Having a man who is a criminal defense attorney occupying the district attorney position is like having a mortician as the surgeon — that's the parallel — in the operating room."