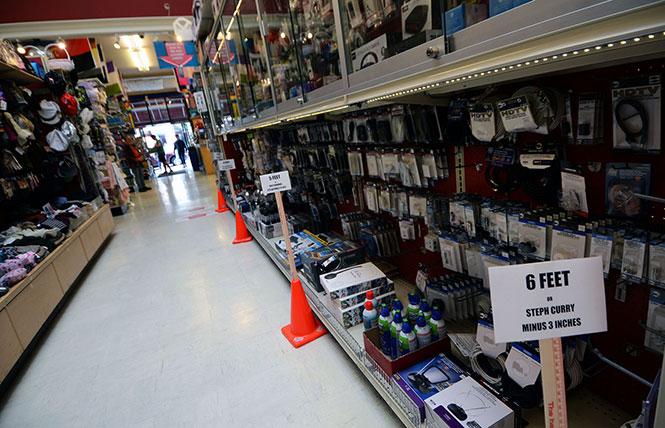 Cliff's Variety in the Castro instituted physical distancing nearly a year ago as the pandemic raged and the store continued to operate. Photo: Rick Gerharter

While the COVID-19 vaccine rollout remains uneven in California, it's a relief that most people over the age of 65 can now make an appointment — that is if sites have the vaccine and are open. However, as the state's plan progresses, it seems some groups, like hardware store employees and bus drivers, have been left out from Tier 1B, which is currently underway. These essential workers stayed on the job throughout the pandemic, becoming lifelines to their communities. In the case of hardware store employees, they were crucial to helping everyone shelter in place safely by supplying repair parts, cleaning supplies, and PPE.

Terry Asten Bennett, the general manager and one of the owners of Cliff's Variety in the Castro, is struggling to make sense of the state vaccination guidelines. "As Tier 1B becomes available for the COVID vaccine, it has become quite clear that our employees were forgotten by the CDC when the tiers were set up," Asten Bennett wrote in a note to the Bay Area Reporter, referring to the U.S. Centers for Disease Control and Prevention. "Our employees have been in close contact with hundreds (collectively thousands) of strangers a day, and are often unable to provide service while maintaining distance. We aren't asking for special treatment, just to be treated equally with our peers in the grocery industry."

That makes sense. If grocery workers and educators are part of 1B, hardware store employees and bus drivers should be too. District 6 Supervisor Matt Haney tweeted this week that bus drivers and sanitation workers continue to be left out even as Tier 1B expands. A group of independent hardware stores in the city recently sent a letter to Mayor London Breed explaining their concerns.

"As the pandemic took hold, we began hearing about the hundreds of thousands of essential workers who, in spite of the threat to their own personal safety, continued to perform their duties to ensure that our society remained up and running," the letter reads. "The ranks of these individuals included our healthcare workers, police officers, firefighters, and EMTs. The debt of gratitude we owe these heroes is immeasurable.

"In addition to these heroes were thousands of other essential workers supporting critical services required to keep our city functioning — the maintenance teams, truck drivers, warehouse workers, and retail employees who kept vital products and supplies flowing to our businesses and households. When California and San Francisco were looking at which services and industries to deem essential during the pandemic, we were pleased for hardware stores to be among those so designated, given the nature of our service to the community. Hardware stores have a vital contribution to make during a period when so many individuals are spending unprecedented amounts of time in their homes. Now that we may be emerging from the darkest part of this pandemic and vaccines may offer a light at the end of this long tunnel, your local independent hardware stores ask that San Francisco support the hundreds of essential workers in this industry who have selflessly risen to the challenge during this difficult time," the letter states.

Many of our readers stopped by Cliff's last year — and continue to do so — to buy cleaning supplies and other essential items. Cliff's instituted physical distancing indoors and continues to run a tight ship. Asten Bennett said she has 42 employees; eight have been able to get vaccinated because they are over 65.

The state assigns every industry a code and can easily fix this oversight. State officials just need to include the code for hardware stores in Tier 1B. This group doesn't represent millions of workers, like teachers, but it does matter to neighborhoods. Customers will have more protection if employees are vaccinated, just as everyone wearing a mask decreases the probability of infection for you and those around you.

"We were literally the first alternative for PPE supplies," Asten Bennett told us, recalling those frantic days last spring when big box stores ran out of hand sanitizer, face coverings, and toilet paper. "We were really patient. We want schools to reopen and teachers to get vaccinated." She also wants her workers to get inoculated too.

Like so much regarding the pandemic, policies set by the state often must be adjusted when problems arise with implementation. It's only fair and makes common sense to protect essential workers who have sacrificed on behalf of us all.