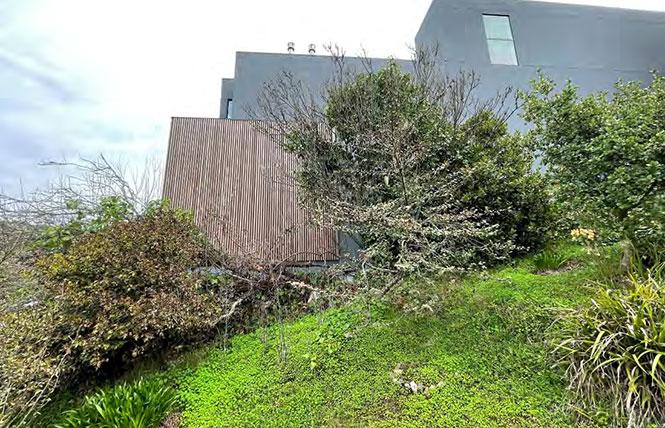 Rocks, foreground, indicate where the ashes of Phyllis Lyon and Del Martin are interred on their former property. Photo: Courtesy SF Planning Dept.

Due to the cremains of lesbian pioneering couple Phyllis Lyon and Del Martin being interred where they lived in Noe Valley, historians are calling on City Hall to landmark the entire property. It would be the fifth city landmark specifically tied to LGBTQ history, if approved, and the first focused solely on lesbian history.

But the city's preservation advisory body is recommending that only the couple's former two-story cottage located at 651 Duncan Street be designated a city landmark. It saw no need to include the adjoining garden plot where the couple's cremains are located, which has an address of 649 Duncan Street.

"They made the conscious choice to scatter their cremains there," Christina Morris, the trust's senior field director in Los Angeles, told the Historic Preservation Commission at its February 17 hearing.

The commissioners voted 6-1 to support only landmarking the Lyon-Martin House. Commissioner Aaron Hyland, a gay man who is its president, cast the sole no vote because he felt the entire property is worthy of being deemed a city landmark.

Commissioner Chris Foley said the landmark request was "near and dear to my heart" because the life of his daughter, who came out as gay at age 11, was made better by the work of Lyon and Martin. While he agreed their home should be landmarked, Foley said he saw no reason for why the adjoining undeveloped parcel needed to also be part of the landmark designation.

"This designation is really important," said Foley, "but I think we should separate the lot. The lot with the cremains I don't think should be part of it."

Commissioner Kate Black, who lived for nearly two decades in a "worker bee cottage" a few blocks away from the Lyon-Martin House, feared landmarking the undeveloped portion would limit the new property owners' ability to construct their own residence on the site.

"I see no relationship to this vacant lot to the importance of Phyllis Lyon and Del Martin and the work they did," said Black, noting she hoped a multi-unit building or a house with a secondary living unit would be built there. "Or whatever the family would like. We should make it as easy as possible for them to do so."

The Board of Supervisors is expected to take up the issue in April.

Shayne E. Watson, a lesbian and architectural historian who co-wrote a 2015 survey of San Francisco's LGBTQ cultural heritage that highlighted the historic significance of the Lyon-Martin House, told the Bay Area Reporter she was "frustrated" by the commission's decision. An organizer of the Friends of the Lyon-Martin House group that formed to advocate for the preservation of the couple's home, Watson said the group will be advocating that the supervisors landmark the entire property.

As for the Lyon-Martin House, the couple is willing to preserve it and give it a remodel to bring it up to current building codes and standards. As such, they are in favor of only landmarking that part of the property.

"We do not plan to demolish the house or impair their memory," said Jones-McKeown, a land use attorney, at last week's hearing.

She said they were not aware of the property's historical significance when they bought it. And had they known of the existence of the women's cremains, Jones-McKeown said they would not have purchased it.

She expressed concern that designating the garden plot as historic will limit their ability to build a home for their family.

"We want to find a way to honor them," Jones-McKeown said of Lyon and Martin, with perhaps an art piece or bench at the site.

Gay District 8 Supervisor Rafael Mandelman is spearheading the effort to landmark the property. He told the B.A.R. he is unsure if he will ask his colleagues when they take up the matter to ignore the commission's recommendation and landmark both the house and adjoining garden plot.

Pioneering couple
Lyon and Martin lived there for most of their 54 years together. They purchased the house in 1955 because of the view from the living room's large window.

Journalists who first met in Seattle in 1952, the couple co-founded the influential Daughters of Bilitis, the first political and social organization for lesbians in the United States. Their home was a gathering place within the city's lesbian community and the site of various meetings and events.