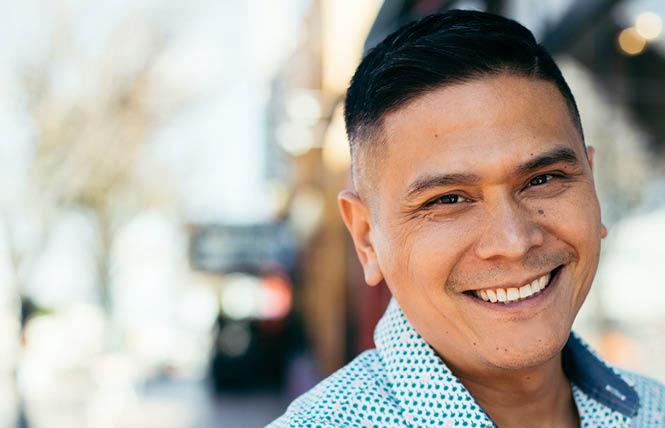 The incoming executive director of a global gay men's health nonprofit wants to make it more accessible to men who have sex with men.

Andrew Spieldenner, who was recently named leader of the Oakland-based organization, wants to make MPact Global Action for Gay Men's Health and Rights "three clicks away" for GBTQ men who want to get involved in the fight against HIV.

"I would like to MPact to be the organization every gay, bisexual, trans, and queer man in the world is three clicks away from an organization they'd find readily, be able to get resources from, and where we can tell the stories of people with HIV worldwide," Spieldenner said in a February 22 interview with the Bay Area Reporter. "We want people to be able to build their own community groups, advocacy groups. If they want to start a book club, let's help!"

According to its website, MPact advocates for equitable access to HIV prevention care, treatment, and support services for gay and bisexual men, including those living with HIV, while promoting their health and human rights worldwide.

Spieldenner, a 48-year-old gay man who is of Vietnamese and German descent, will start his new position March 1.

The role caps a lifetime of activism that began when he was an undergraduate student at UC Berkeley in the 1990s.

"It was like two completely different gay worlds — Oakland and San Francisco," Spieldenner recalled. "I was young, and queer and poor. I needed a job and I was dating a guy with HIV who got me a job at LYRIC."

Spieldenner was at the Lavender Youth Recreation and Information Center when it moved from the Women's Building to its current home on Collingwood Street.

"Can't believe I remember the name of that street," he added.

It was while he was at LYRIC that he got involved in two intersecting causes — racial justice, at the time of the Rodney King trial and subsequent unrest, and HIV, at the nadir of the epidemic in the Bay Area.

"Most of the organizations I did in college were around people of color issues and it was very important and continues to be," Spieldenner said. "I got involved with HIV because the 1990s were rough. You couldn't go to a bar without seeing someone with lesions or physical debilitations. A lot of people died — a lot of people I came out with died in the early-to-mid 1990s. It was hard and this was one way to connect with that."

"I was one of those people who did HIV work before being diagnosed with it," he said.

Spieldenner eventually earned a master's degree from UCLA and a doctorate from Howard University. His resume included stints at Global Network of People Living with HIV-North America and the Latino Commission on AIDS.

He has taught courses on sex work; women, gender, and sexuality; health communication; Asian Americans in media; and queer media. He said he will keep his faculty position and maintain his residence in Southern California after he begins as executive director of MPact.

"I'm going to keep the faculty position. Similar to how grants work, there will be a buy-out of my teaching. I love being a professor and I'm getting to an age where retirement matters. Right now I have the opportunity to do both, so it's a win-win for me," Spieldenner said. "With the pandemic, [MPact] decentralized the office. The ... cost of an office obviously doesn't make sense in a pandemic. When it's a good idea, I'll be in the Bay Area more frequently. But my goal is to keep the office decentralized and for us to have a larger impact globally."

Making MPact into the premier organization for HIV advocacy work is Spieldenner's goal.

"It's such a problem when we historicize HIV," he said. "It says something about the value of our lives when people turn away from us.

"I'm thrilled to be doing this work," he added. "We need community support and I'm excited to start fundraising for gay and bi men around the globe."

"Andy is an inspiring and energetic leader. His passion for elevating the voice of the global LGBTI community and his intersectional approach to public health policy has earned Andy the esteem of advocates around the world," Don Baxter, the chair of the MPact Board of Directors, stated in a news release. "The board and staff are excited to work with Andy as our new executive director and confident that MPact will be well positioned under his guidance to thrive in the years to come."

Spieldenner takes over for interim executive director Mohan Sundararaj, who is MPact's director of programs.