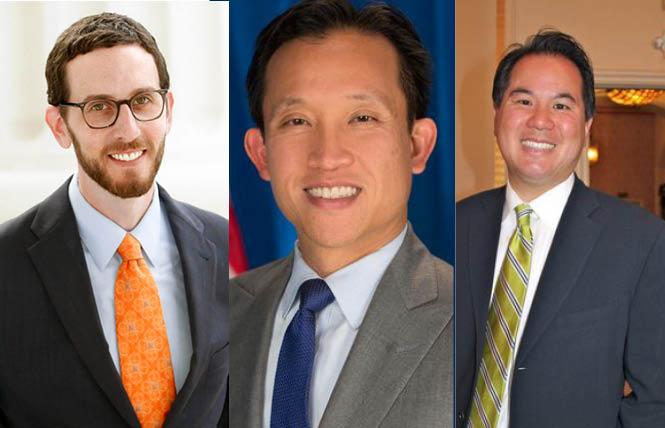 State Senator Scott Wiener, left, and Assemblymen David Chiu and Phil Ting, have all introduced bills that would address housing and homelessness in the Golden State. Photos: Courtesy the legislators

San Francisco's trio of state Democratic lawmakers is pushing myriad bills this year to address the housing and homelessness crises in California. Housing prices have skyrocketed throughout the Golden State during the COVID-19 pandemic as residents look to move into single-family homes due to the health crisis.

Despite efforts to move more unhoused people off the streets and into shelters or supportive housing to protect them from contracting the virus, more than 150,000 people across California remain homeless on any given night. The state has the largest unsheltered population in the nation.

"COVID-19 has cast a big spotlight on our housing problems. If anything, it is often gotten worse under COVID," said gay state Senator Scott Wiener during a virtual news conference last week. "COVID has made it even more clear what happens when you have a housing shortage."

To address the connected issues Assemblyman David Chiu authored Assembly Bill 816 to take a statewide approach to reducing homelessness and holding local governments accountable through legal action if necessary. His legislation, introduced February 17, would require state and local governments to develop actionable plans to reduce homelessness by 90% by December 31, 2029.

The state's Department of Housing and Community Development would review and approve the plans created. And a new housing and homelessness inspector general could take cities and local governments to court if they fail to draft a plan or don't work on implementing it.

"State and local governments need to be rowing in the same direction toward the same goal if we are ever to see a significant reduction in homelessness," stated Chiu. "Homelessness is the moral crisis of our time, and this bill ensures governments at all levels are responsible for addressing it."

Wiener, chair of the Senate Housing Committee, has a package of bills this year aimed at boosting the production of new housing across the state. Several are new bills and others he is reviving after they failed to make it out of the Legislature last session.

Last Thursday, February 18, he introduced Senate Bill 478, the Housing Opportunity Act, to make it easier to build duplexes and 10-unit buildings in areas of cities zoned for such housing. It sets minimum standards on floor area ratios — 1.5 on multi-family zoned lots — and minimum lot sizes to ensure that cities can't use what is known as "ghost zoning" to effectively make it impossible to build anything but monster single-family homes on the lots.

While a "wonky bill," Wiener said it is "profoundly important" to pass as it addresses "two issues and two strategies that sadly far too many cities use to make it impossible to build multi-unit housing" in their residential neighborhoods.

"The wonky bills sometimes are the ones that can actually lead to this missing middle housing," said Wiener. "Two- to 10-unit buildings are more affordable and less expensive to build. It will really help us to plug our housing hole in the state of California."

His SB 477, the Housing Data Act, would create a single database for how much housing is being built in the state and allow lawmakers to know if local jurisdictions are implementing the various state housing laws.

"It will help us get that comprehensive data to see what is working, what is not working, and what needs to be fixed," said Wiener.

Earlier in the year Wiener had introduced SB 10, which creates a streamlined process for cities to zone for missing middle multi-unit housing. Similar legislation failed to make it out of the Assembly last year. He also filed SB 234, which allocates $100 million to build housing for youth exiting homelessness, the foster care system, or the criminal justice system.

"Addressing this issue from multiple angles as you have done lays the foundation to build a more equitable California," said Jed Leano, mayor pro tem of the city of Claremont in Los Angeles County.

Al Abdallah, the chief operating officer of the Urban League of San Diego County, said the housing bill package Wiener has introduced addresses the systemic racism cities have built into their zoning laws. Restrictive housing rules have long been used to keep people of color out of more desirable neighborhoods, said Abdallah, preventing minority households from building up the same equity via the homes they end up buying.

"We look at this from a wealth generating perspective," he said. "If you want to improve the standard of living for yourself and your family, it is through homeownership."

Wiener and Chiu are co-sponsoring SB 617, the Solar Access Act, to allow for automated solar permitting in local jurisdictions with over 10,000 residents. The bill aims to cut down on the costs and approval process for residential solar and solar-plus-storage systems by allowing for remote inspections and sign offs.

An additional 50,000 smaller homes known as ADUs, or accessory dwelling units, could be built over the next five years under Assemblyman Phil Ting's AB 561. It would create a state financing program to help homeowners, especially those who don't typically qualify for traditional loans, to build ADUs on their property.

When he served on the Board of Supervisors, Wiener pushed to make it easier to construct ADUs in San Francisco. But construction loans to build such structures are often difficult to secure, noted Ting in announcing his legislation February 11.

"The number of ADUs has skyrocketed, as a result of our new laws that have encouraged their growth. But the flurry of activity is mostly happening in wealthier areas," stated Ting. "In the name of equity and fairness, we must extend this opportunity for rental income and increased housing supply across all neighborhoods."

The various legislative committees assigned to hear the housing legislation will take them up this spring.