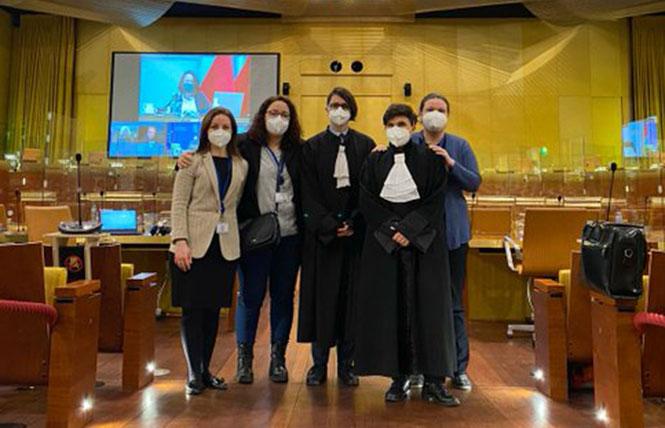 ILGA-Europe tweeted this photo of the Bulgarian lesbian couple and their attorneys after the case was heard at the European Union Court of Justice. Photo: Courtesy ILGA-Europe

The European Union's Court of Justice now has to decide if a binational lesbian couple's daughter will be granted a Bulgarian birth certificate and receive citizenship.

A hearing was recently held, with a decision expected by mid-April.

The case is the couple's last-ditch effort to protect their 1-year-old daughter from becoming stateless, despite being a citizen of the E.U.

If the court decides against the family, the child might not be able to go to school, get health care, government benefits, or travel because she will not have the necessary identification documents necessary.

The girl's mothers, Bulgarian-born Kalina Ivanova and Gibraltar-born Jane Jones, have been attempting to get citizenship in one of their respective countries since she was born in Spain, where the couple currently resides, and have been denied at every attempt. The family is using pseudonyms to protect their privacy.

(Gibraltar, a narrow peninsula of Spain's south coast, is a British Overseas Territory.)

Ivanova's mother traveled to Spain to meet the child after she was born because the family could not leave the country.

After the girl's first birthday, Ivanova's father traveled to meet his granddaughter for the first time, she said in a video about the family's case for International Lesbian, Gay, Bisexual, Trans and Intersex Association-Europe.

Jones said in the video, "It's even worse because everyone else is able to travel. We still won't be able to."

In December 2019, Spain provided a birth certificate for the child, denoting Ivanova and Jones as her parents. Despite being born in Spain, the child cannot be a Spanish citizen because her mothers are not Spanish citizens.

Jones attempted to obtain United Kingdom citizenship for the child, but British law did not allow same-sex Gibraltar citizens to pass their U.K. citizenship to their children. Only heterosexual binational couples were granted that right by law. Furthermore, the U.K. is no longer a part of the E.U.

This left Bulgaria as the couple's only option to gain citizenship for the child.

Ivanova told Reuters that the case has "caused us a lot of upset."

"This discrimination feels very personal and has shocked us," she said.

The case
Ivanova attempted to register to get the child's birth certificate and citizenship in February 2020.

Within a week, the Bulgarian government denied it, stating it did not recognize two women as mothers.

Same-sex marriage is constitutionally banned in Bulgaria, and same-sex civil partnerships are not legally recognized either.

Ivanova filed a complaint against Bulgaria with the Administrative Courts in Sofia, the country's capital, in March 2020.

The couple is supported by Bulgarian LGBTQ legal advocacy organization Deytsvie, which was co-founded by their attorney, Denitsa Lyubenova.

Bulgaria punted the case to the E.U. court to be heard by a panel of 15 judges in Luxembourg, where the court is based.

Lyubenova was joined by ILGA-Europe's head of litigation, Arpi Avetisyan, to argue the case before the court February 9.

Von der Leyen committed to this goal in her 2020 State of the Union address, and the E.U. announced a five-year plan to equalize LGBTQ rights throughout Europe.

"Parents cease to exist when moving from one E.U. country to another, where birth certificates from another member state are not recognized," she said in a February 4 joint news release with Deytsvie, announcing the case's appearance before the court. "These situations create severe obstacles for children in exercising the rights to which they are entitled under European and international law."

Lyubenova called upon the court to act.

"The court needs to reconfirm that rainbow families are as valid as all others," said Lyubenova in the release.

The Bay Area Reporter has reported on similar cases involving binational European and American gay families in the Czech Republic and Italy.

Ivanova and Jones's case is not the only LGBTQ family case before the court this year.

Poland is denying Irish and Polish mothers Kashka and Sinead, who are also currently living in Spain and had their daughter in the country, the right to obtain a birth certificate and citizenship.

The country has cracked down on its LGBTQ community during and after a hate-filled anti-gay presidential campaign last year that spread homophobic rhetoric and saw towns turned into so-called LGBT-free zones.

Retreating from progress
In 1968, Bulgaria decriminalized homosexuality, which made the country progressive on the issue at the time. In 2021, the Balkan nation, which is a member of the E.U., is under a conservative wave fueled by U.S. evangelicals that has been growing since 2018, reported Emerging Europe.

At the same time, Bulgarians' support for LGBTQ rights appears to be growing stronger in the face of homophobic attacks, according to the media outlet.

Lyubenova sees Ivanova and Jones' case as a game changer, as central and eastern European countries are "derogating from basic human rights guaranteed by the European Convention on Human Rights and the Charter of the Fundamental Rights of the E.U.," she said in the release with ILGA-Europe.

"This weakens the E.U. position as a guardian of human rights," she continued.

"With this case we have the chance to realign the practice in E.U. countries with the principles set out in the E.U. Treaties and to protect the rights of LGBTI families and their children moving across Europe," she said.

The campaign to push the lawmakers to pass the law was led by lesbian couple Katie, 34, and Natalie Perez-Muldoon, 40, with the help of Gibraltar's Equality Rights Group. Katie is a U.K. citizen who moved to Gibraltar to be with Natalie, who was born and raised on the island.

The law was passed just in time. Their son is due to be born sometime this month. The couple will be able to obtain his birth certificate, and he will be granted citizenship.

"I know that it is going to help so many families," Katie told Gibraltar Broadcasting Corporation in an interview earlier this month.

It is unclear how the new law will affect Ivanova and Jones' situation.

Hopeful
The couple's lawyers, Lyubenova and Avetisyan, are hopeful about the women's case at the E.U. court.

In 2019, Bulgaria was forced to recognize a lesbian Australian and French binational couple's marriage in France after a two-year landmark court battle. They were allowed to live, work, and travel in the country and throughout the E.U.

Lyubenova won that case in the Bulgarian court, declaring it a landmark win for same-sex marriage in the country.

She is hopeful that Ivanova and Jones' case will be just as groundbreaking.

LGBTQ people no longer criminalized in Angola
LGBTQ Angolans are now free to live without persecution for who they love, as the country officially decriminalized homosexuality last week.

The Southwestern African nation's parliament February 10 eliminated the Portuguese colonial-era law that had criminalized LGBTQ people since 1886. For 134 years, those convicted under the former law with the provision "vice against nature" faced up to 14 years imprisonment.

The law was rarely enforced, but LGBTQ people were discriminated against due to it, according to Human Rights Watch. In 2019, Angola's parliament struck down the law in the country's penal code, the first time the code was revised since Angola gained its independence from Portugal in 1975. However, President Joao Lourenco did not sign the law until November 2020, giving way to it officially becoming law February 10, reported HRW.

Repeal of the law came a year after Angola granted legal status to the country's only LGBTQ advocacy organization Iris Angola in 2018.

Angolans found guilty of discriminating against people based on their sexual orientation face up to two years in prison. The law does not include gender identity.

"Discrimination based on sexual orientation is now punishable and can lead to jail time. A great progress for human rights which should inspire others," said gay French politician and LGBTQ activist Jean-Luc Romero-Michel, praising the country's actions, reported The Canary.

In Africa, same-sex relationships are criminalized in 30 countries, including Kenya, Nigeria, and Uganda.

Same-sex relationships have been decriminalized in 24 African countries, including South Africa, Botswana, and Gabon. Some countries have also decriminalized gender identity.

"We are excited and join #LGBTQ persons in #Angola to celebrate the decriminalization of homosexuality. This is surely a stride that continues to encourage and motivate us to advocate for the #Repeal162 here in Kenya! Aluta Continua! #LoveisHuman," representatives of Kenya's National Gay and Lesbian Human Rights Commission tweeted February 11.

The law was passed a week after the United States placed LGBTQ rights at the forefront of the nation's foreign policy.

Updated, 2/18/21: This article has been corrected to state Gibraltar is a peninsula, not an island.

Out in the World: Peru elects first lesbian to Congress; COVID takes life of first trans politician
Sign up!