Editorial: Making a mockery of diversity 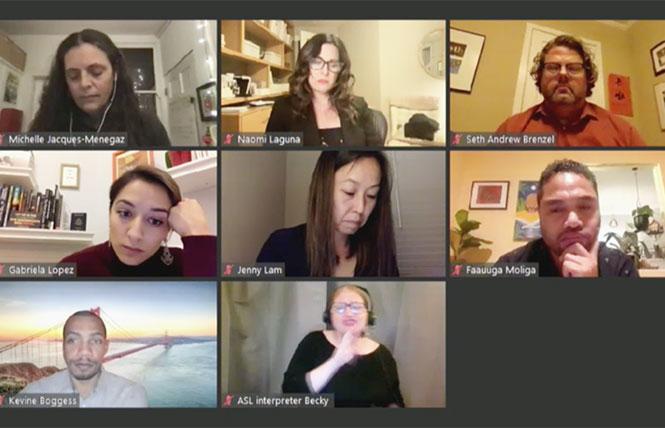 Parent Advisory Council applicant Seth Brenzel, top right, was praised and criticized for the fact that he's a gay white dad during a recent Board of Education meeting. Photo: Screengrab

The San Francisco Board of Education made a mockery of diversity, even as members have the right intentions. At its February 9 virtual meeting, the board's execution in this pursuit was shoddy and resulted in a gay white man being vilified for who he is.

As many people have no doubt heard, the board was considering the appointment of Seth Brenzel to the district's 15-member Parent Advisory Council, which was created to provide parent input to the Board of Education on policy. He's a gay dad who is involved in his daughter's public school and the nine PAC members unanimously recommended him. (His daughter is mixed race, a fact that was both praised and dismissed by speakers during public comment.) He would be the only man and the only LGBTQ person on the council, which presently has five regular and three alternate vacancies. The moms on the PAC include whites (3), Latinas (3) Blacks (2), and a Tongan. But it was the fact that Brenzel is white that seemingly doomed his chances — at least for now. Commissioner Mark Sanchez, a gay man who's the only LGBTQ person on the seven-member school board, said he "didn't want to micromanage" the selection process but that only 15% of the district's students are white and adding Brenzel to the PAC would result in too high a percentage of white council members — 40%. He suggested that Michelle Jacques-Menegaz, the PAC coordinator, come back to the board with a slate of diverse candidates — including Brenzel.

And that's where the discussion should have ended. Following public comment, the board actually agreed with this idea and tabled the vote on Brenzel — but not before a lot more pontificating about the issue, exhibiting an utter lack of respect for Brenzel. Per the video recording of the meeting, no board member asked him a single question, such as why having an LGBTQ person on the PAC is important, his desire to contribute to the school district, or his qualifications. They left him in the corner of the SFGovTV screen even as they talked about him. That's unprofessional. Brenzel is involved with Decreasing the Distance, a collective of San Francisco Unified School District parents that advocates reopening the schools. But while some speakers were critical of the group, Sanchez said he doesn't have a problem with a Decreasing the Distance parent on the PAC. "I want voices from Decreasing the Distance," he said.

During public comment, one speaker representing the Chinese American Democratic Club acknowledged the group "dropped the ball" on efforts to recruit Asian and Pacific Islanders for the PAC. Another speaker urged supporting Brenzel while working to increase minority PAC members. One person charged that the board was "shaming LGBTQ parents." Another speaker, who said they were an openly queer parent, said queer people of color's voices should be put ahead of whites. Still another speaker pointed out that diversity isn't just about race, but also thought. Several people suggested adding more seats to the PAC to make it more diverse. Jacques-Menegaz told the commissioners that she'd like to see the PAC "represent all families in the district," including those who are homeless, those who have a family member incarcerated, the Filipino community, monolingual APIs, Native Americans, and Arabs. She said she was asking for the board to approve Brenzel now "because the numbers are so low" on the PAC, due to difficulty recruiting qualified applicants willing to serve.

School board Commissioner Matt Alexander acknowledged that Brenzel "was caught in the middle" without directly soliciting feedback from him. "From what I can tell you seem like the kind of person we want on the PAC," he said. Commissioner Kevine Boggess, like Alexander a new board member, said he had a lot of concerns about all advisory committees in the district but noted this was his first time really hearing about the issue.

Ultimately, the board made the right decision by tabling the vote, rather than rejecting Brenzel for the PAC seat. After concerns were raised by some board members about the PAC application itself, it's clear a revamp is in order. (Commissioner and Vice President Alison Collins said the application "doesn't bring up" that it holds the policies of the district students and families at the center of its work and explicitly looks at existing structures and systems.) The PAC should continue its outreach efforts, which Jacques-Menegaz said it's doing (and not just to PTA groups, since not all schools have them, she noted). And the board should consider Sanchez's suggestion that the district offer a stipend, perhaps means-tested, because the PAC "is overly represented with folks with means, particularly folks who are white." But making the right decision while subjecting an applicant to humiliation is not a good look for the board. In fact, using what was said at the meeting, gay slain San Francisco supervisor Harvey Milk, whose name adorns the district's public school/civil rights academy in the Castro, wouldn't qualify for the PAC — he was white and not even a parent.

The Board of Education has suffered from a series of self-inflicted wounds lately that have made it a laughingstock in national and international news coverage. This recklessness runs the risk of turning into a caricature of liberalism run amok.