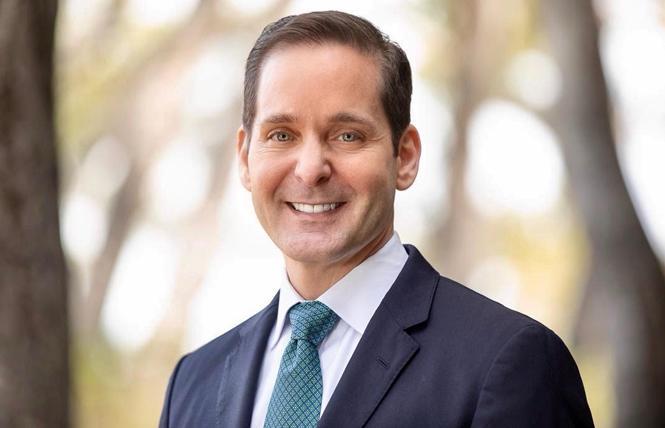 A groundbreaking report is shedding light on the issues facing LGBTQ accountants, especially LGBTQ women of color, as leaders of the profession attempt to diversify its ranks. It is the first-ever survey to gather sexual orientation and gender identity demographics about members of the field and the issues that are driving LGBTQ people out of it.

Between 43% and 55% of the female, nonwhite, Hispanic, Latino, and LGBTQIA survey participants said they had left a company due to a perceived lack of equitable treatment. Thirty percent of the LGBTQIA accountants said they had quit a job because of a lack of inclusion at their company.

The Institute of Management Accountants and the California Society of Certified Public Accountants teamed up to conduct the research. The Bay Area Reporter was provided the survey findings ahead of their public release Tuesday (February 16).

"For me, it was validation of something I have felt for a while but wasn't a well-known fact," said Anthony Pugliese, a gay man who has been president and CEO of CalCPA since January 2019.

Pugliese, 53, who lives with his husband and their twin daughters in the Sacramento region, first spoke about the survey with the B.A.R. in October. Following the Black Lives Matter protests last year, CalCPA created a Diversity, Equity and Inclusion Commission to examine how it could create a more diverse and equitable culture in the accounting and finance profession.

According to the Bureau of Labor Statistics, 23% of accountants and auditors are non-white and according to the National Association of Black Accountants, less than 1% of CPAs in the U.S. are Black.

In addition to wanting to know what issues female accountants and people of color faced in the profession, Pugliese advocated for also asking about LGBTQ issues in the survey knowing that improving the work environment for LGBTQIA accountants also needed to be addressed.

"I think a lot of people consider the LGBTQIA community as being somewhat protected from discrimination or lack of inclusion. Some people feel that way because they think we can hide it," said Pugliese, who in March will become president and CEO of the Institute of Internal Auditors, a globally focused association.

The report, "Diversifying U.S. Accounting Talent: A Critical Imperative to Achieve Transformational Outcomes," found that for every 10 of the accounting profession's most senior leaders, nine are white, eight are male, and few openly identify as LGBTQIA (The I is short for intersex and the A for asexual). Yet women now account for a majority of the country's accountants (62%) and more than one-fifth are nonwhite professionals.

"This report gives a voice to members of the profession by presenting their contemporary experiences and is meant to heighten awareness and inspire change at all levels," stated IMA director of research Loreal Jiles, the report's lead researcher.

Because of a dearth of reliable statistics and census data on LGBTQIA people working in the accounting profession, the report notes there is no way to know exactly how many accountants identify as LGBTQIA. Instead, the 50-page report suggests they are as underrepresented as that of LGBTQ+ persons across corporate America and its senior leadership, as McKinsey detailed in a 2020 publication.

"The dramatically low demographic diversity within accounting executive leadership raises a question for the profession's longer-term sustainability: Why are persons from diverse demographic groups (other than white men who do not openly identify as LGBTQIA) overwhelmingly underrepresented at the profession's most senior levels?" asks the accounting groups' report.

It is based on an online survey of more than 3,000 current and former U.S. accounting professionals and interviews of nearly 60 accounting, human resources, and diversity, equity, and inclusion (DE&I) practitioners and academics. Just 50% said they felt the profession was inclusive and 48% said they found it equitable.

"Although our research highlights the stark reality facing the profession today, it also presents a great opportunity," stated IMA President and CEO Jeff Thomson. "Members of our profession are telling us that the only way to overcome today's DE&I challenges is to collaborate to enact meaningful change, and collective action needs to be taken now."

Of the 3,136 survey respondents and 57 interviewees, 47% identified as female, 68% identified as white or Caucasian, and 7% identified as LGBTQIA. Fourteen percent of the LGBTQIA respondents said they had experienced direct bias or discrimination, while 15% said they felt they were passed over for promotions because of their sexual orientation or gender identity.

Among LGBTQIA respondents, 60% said the profession's leaders demonstrated "unfair prejudice or bias toward this group that negatively affects promotion," while 34% felt not enough focus was paid on retaining LGBTQIA employees. They were evenly split on feeling LGBTQIA people received fair treatment in the recruitment process and had equitable access to on-the-job sponsors or mentors.

"Career decisions of LGBTQIA respondents are more heavily affected by a lack of DE&I than respondents of any other demographic group. These findings suggest that the lack of DE&I, specifically inequitable and exclusive experiences, has a direct effect on the retention of diverse talent," according to the report.

Another issue is the lack of out accountants, as the survey found most remain closeted at work for various reasons. It noted their doing so "contributes to a lack of visible senior LGBTQIA leaders in the U.S. accounting profession."

"It is hard to be out and proud and flung into the spotlight on something like that," Pugliese said.

Nonetheless, Pugliese told the B.A.R. he is concerned a lack of out accountants could result in LGBTQIA young people concluding that the profession isn't going to be welcoming of them. If the field is going to have any success in recruiting more LGBTQIA people to become accountants, improving their visibility on the job will be key, he argued.

"Mentors are very important, just to help navigate some of the corporate landscape issues you can run in to," said Pugliese, noting that he benefited from having such a person when he started out in the profession.

Now that the survey has been completed and its results published, Pugliese said the next step is determining how best to address the findings. Tackling some of the LGBTQIA concerns will require overcoming one unique issue, he noted.

"You can't force people to be more open about their sexual orientation or gender identity. So how can we help people understand they have an important role to play as a mentor," Pugliese said. "It only takes a few people to impact a lot of lives if they get out there in that kind of role."

Several partners worked with IMA and CalCPA on the research study, including the International Federation of Accountants; the National Association of Black Accountants; the Association of Latino Professionals for America; and the PhD Project. Professional CPA groups in Connecticut, Colorado, Florida, Illinois, Maryland, Massachusetts, Ohio, Pennsylvania, and Texas also provided support.

The report is available at here.