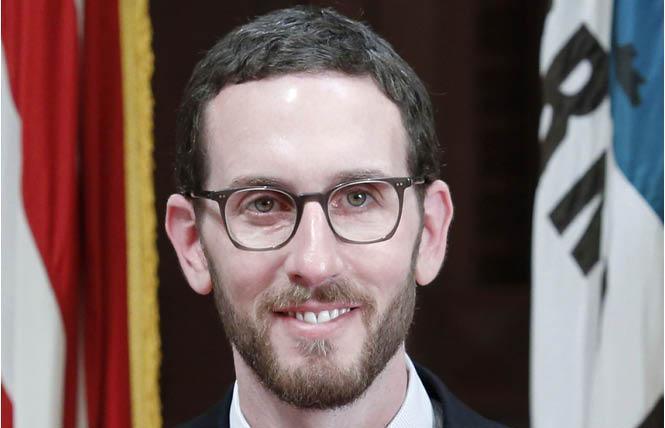 Proposed legislation seeks to ensure that the University of California only contracts with facilities that allow the UC staff in those facilities to provide gender-affirming and reproductive health care.

"This legislation will expand access to health care for LGBTQ people and will begin to end stigma," Wiener told the Bay Area Reporter February 12. "I think a lot of us have strong opinions about major hospitals refusing to provide gender-affirming care and reproductive health, but this isn't even about that. This is about a public university entering contracts where UC physicians are prohibited from providing care to our community. That's just not acceptable."

SB 379 would change current laws where, as Wiener said, "you can have a situation where a UC physician is treating a UC patient at a Dignity hospital, for example, and they can't provide a service.

"Equal access to services paid for by public dollars is not a 'nice to have' — it is an absolute 'must have,'" Laird stated in an email February 12. "This is especially true for historically highly marginalized communities. Providing completely equal access to healthcare for the trans community is a basic human right and cannot be overlooked."

Garcia said that the legislation is meant to close a "Pandora's box."

"The purpose of SB 379 is simple," Garcia stated in an email February 12. "Organizations that willingly choose to deny patients reproductive, gender affirming, or any other type of care because of religious beliefs should not receive contracts from the University of California system. It opens a Pandora's box for violations of separation of church and state, by continuing to contract with providers that discriminate in such a manner."

Low stated that since the UC system receives some $9 billion in state money, it "owes all taxpayers the best care possible."

"We are seeing reproductive and LGBTQ-inclusive care continue to be limited across the country — and that's a major problem," Low wrote in an email to the B.A.R. "We will continue to fight to make sure public health systems do no enter into contracts with health care facilities that subject providers to dangerous restrictions. It's a no-brainer. We as leaders need to protect patients who need care, and that's what this bill does."

Wicks did not respond to a request for comment.

A news release from Wiener's office states that the bill will end limits on care "not based on any clinical criteria" and that "disproportionately impact patients of color, LGBTQ people, and people with low incomes, who already face barriers to accessing quality, affordable, and inclusive health care."

"Some of the harmful contracts UC Health has entered into explicitly prevent UC doctors and students from providing reproductive and LGBTQ inclusive care, including: contraception, sterilization, abortion, gender-affirming care, and urgent care, such as treatment for miscarriage and ectopic pregnancy," the news release states. "The status quo endangers the lives of UC patients, and this legislation ensures that UC providers are able to provide this critical care wherever they practice."

A representative of Equality California, which cosponsored the bill, said, "we hope that LGBTQ+ Californians are paying close attention to this bill."

"While UC Health has refused to affirm their commitment to providing high-quality, evidence-based care for LGBTQ+ people at all facilities, many of us have been denied care or harmed at hospitals that restrict services for non-medical reasons," EQCA legislative manager Tami Martin stated to the B.A.R. "We know that rural, low-income and LGBTQ+ Californians already face barriers when receiving healthcare - discrimination by a state-funded health system should not be one of them."

The bill was also co-sponsored by the American Civil Liberties Union of California and NARAL Pro-Choice California.

"UC Health doctors and students want to provide the highest standard of care possible for their patients, the care their patients deserve," Elizabeth Gill, a senior staff attorney with the ACLU of Northern California, stated in Wiener's release. "Thousands of members of the UC community have spoken out about their serious concerns with UC Health's restrictive contracts, but UC Health has ignored these concerns or responded secretly with incomplete measures. We thank Senator Wiener and the co-sponsors of this bill for bringing this issue to the legislature. We hope it results in transparent, accountable behavior from one of the biggest health care providers in the state that is also a part of our public university system."

"The University of California is world-renowned for its leadership in comprehensive reproductive and LGBTQ-inclusive care — which makes contracts that limit the ability of UC doctors and students to provide basic reproductive and gender-affirming care all the more troubling," Hovis stated in the release. "After four years of unprecedented attacks on reproductive freedom and LGBTQ+ rights from the Trump administration, SB 379 is critical to ensure that the UC lives up to its values."

When reached for comment February 12, UC Health stated it is considering the ramifications of the proposed legislation on its responsibilities.

"On February 10, the University of California learned of state legislation that would prohibit physicians and other clinical personnel, and trainees from UC's academic health centers from providing patient care at facilities with policy-based restrictions on care," a statement from the working group on comprehensive access states. "We are carefully examining the implications of the bill including its impact on core areas of the university's designated responsibilities. We strive to promote practices that maximize equitable access to health care, and agree strongly that all Californians should have access to comprehensive services without interference.

"We look forward to working with the Legislature, health professionals, and other key community stakeholders to meet our shared goals of access, quality and nondiscrimination," the statement concludes.

Updated, 2/12/21: This article has been updated with comments from UC Health.

Updated, 2/16/21: This article has been updated with a comment from Evan Low.